Adrenaline on the rocks!

A six-day-long trip to Malaysia made me come back home with a million memories. 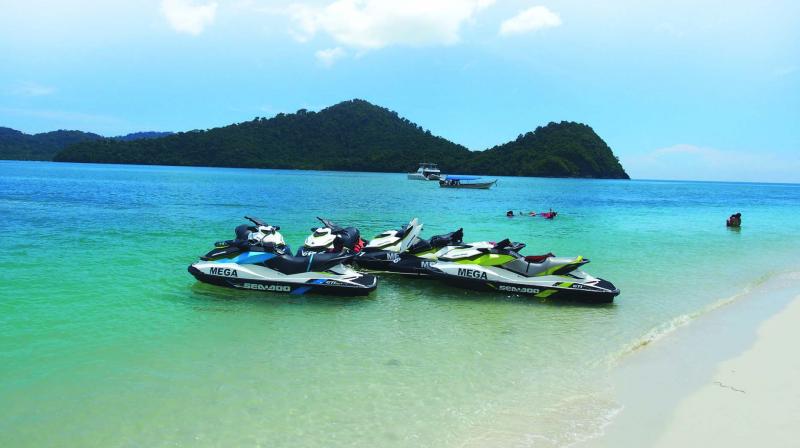 Jet skis on the shore of Langkawi’s main island

A recent trip to Malaysia proved to be an eye-opener. After all, there was adventure at every step and every moment was about conquering your fears and living life like there's no tomorrow.

For me, the word ‘adventure’ has evolved over the years. While as a child it meant visiting a theme park, at 16 or 17 it meant riding a speeding bike (never exceeding 70 km per hour, however). And as I kept travelling every year, each destination defined adventure very differently. And my last trip was all about pushing my adrenaline to the peak.

A six-day-long trip to Malaysia made me come back home with a million memories. From visiting exotic locations to taking on adventures beyond my wildest dreams, I couldn’t have asked for a better adventure destination than Malaysia. Fun-filled activities like jet-skiing, multiple cable-car rides, walking amidst the clouds (sky-bridge) and zip-lining kept me on my toes since even before the trip began. If adventure is your cup of tea, you should dive in!

So first, let me tell you about my epic jet-skiing experience. Even though I showed up at Langkawi’s Mega Water Sports in a black swimsuit, ready to play in the water, swimming was something I had never added to my life skills list. Thankfully I was accompanied by the best guides who made my safety his first priority let me do whatever I wished as long as I followed some simple guidelines. Soon I find myself selecting my jet and learning how to handle the water-vehicle. And without further ado, we headed for the sea. For the first several minutes, I was scared to death. Not because I didn’t understand how to drive the jet but because once in my childhood my mother had asked me to stay away from water bodies as it was unlucky for me. Though I don’t believe in such predictions, the fear somehow stayed on until that day when I took my chance. Thanks to my co-rider, who wanted to experience it all but kept screaming every time I sped up, I became more determined to prove myself. Eventually, she gained confidence in me and my fear receded. I visited four islands during this jet-tour.

When we halted at Dayang Bunting, the second largest island among Langkawi’s 99 islands, we found Lake Guillemard or Lake of the pregnant maiden (named after the island which looks quite similar to a resting pregnant woman). Our guide gave us an hour to explore. To our utter amazement, amidst the lush green all around lay a freshwater lake within 100 meters of the sea. It was evident that the greenish-blue lake offers wanderers with various exciting activities. I simply jumped into the lake (of course wearing my life jacket) and gosh it was so much fun! My temporary roommate cum co-rider didn’t know how to swim either and I managed to drag her into the water and we girls had the best time. The other islands, tranquil and serene as I expected, gave us some picture-perfect moments and the day’s adventure succeeded in turning a meek soul a bit more confident and giving her some unforgettable tan scars at the same time. (you can avoid the same with some sun-screen, though)

Next, it was the turn for the ropeways. We had gone for two cable car rides, one at Genting highland and the other one at Langkawi.

For the latter, the stories were quite chilling and the imaginary view from the top of Mt. Mat Cincang was alluring. A mixed feeling started to engulf me as I approached the 2.2 kms long cable car ride. But surprisingly, while we headed for the mountain peak, I did not feel a thing and it was all going really well. The dense forest cover beneath us and surrounding misty view intimidated us but I was ready to witness the astounding sunset from the top of the world.

But what was awaiting us was nerve-wracking. As we reached the peak, we found the sky-bridge ahead of us. From a distance, it felt harmless enough. But as I got ready to take the first step, my legs started trembling and feeling heavy, as if they weren't ready to listen to me. For the first couple of minutes, I was in utter search for a Bhai-Bandhu (family or friend). But then I tried to convince myself, this is the place where an intricate action sequence from the blockbuster movie Don was shot and I am no less than Shahrukh (or his body-double for that matter!) As I started humming in a shaky voice to provide myself some courage, all my co-travellers realised the difficulty level. Thankfully, all of us became one another's blind stick for the moment. And the view made our struggle totally worth it. The other cable car ride at Genting highland was not as steep as the former. But, the glass floor of the cars gave me the feel of a mythological character who used to fly around amidst the thin air.

Coming back to another Langkawi experience in Umgawa let’s talk about zip-lining (my forte or so I thought, at least). Navigating off a hanging rope was something I knew I could do, as the safety measure and the expertise of the guides seemed very comforting. We even travelled from one tree to the other, sometimes holding the strap, sometimes posing or even dancing in the air. The forest seemed interestingly calm and it was all going good when suddenly the roar of a waterfall was heard when I was in the mid of a stretch. The unforeseen shockers prancing upon us added a feather to all the adventure activities.

Just an hour’s drive away from Kuala Lumpur, the capital of the country, you’d find a 400 million-year-old natural cave. The place (Batu caves) is primarily known as one of the major Hindu temples outside India. But the limestone cave, the dead volcano and a 272 step stairway from where one wrong step could mean death were equally intriguing indeed.

But I did it all. There was palpitation, uncertainty about capability and anxiety before every activity. But holding my hands were my co-travellers and the very efficient guides who took personal care for every enthusiast present in the group and the mystical views from each destination which motivated me to go for the next one.

There are many other activities that are just as spinning chilling and mind-boggling. But, I’ve stored them for the next time. It would be one of the many reasons to again head out to Malaysia, truly Asia!