Veteran actor Asha Parekh, whose biography will soon hit the stands, speaks about the ups and downs of her B’wood life and her own personal struggles. 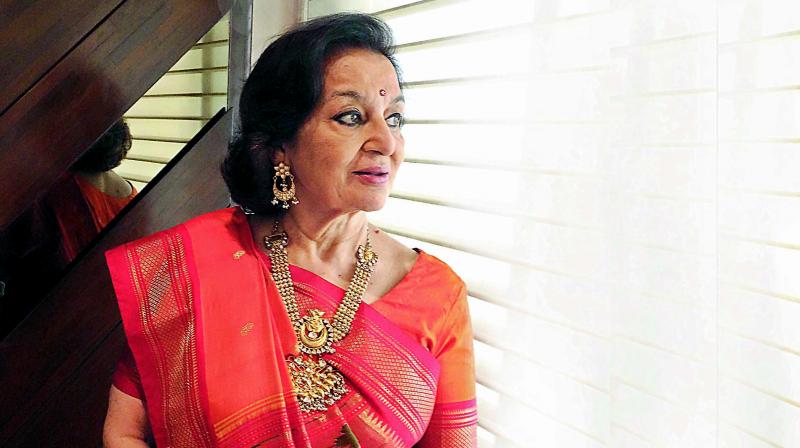 Actor, director, producer, CBFC chairperson, benevolent supporter of charities — Asha Parekh has donned many hats in her long and illustrious career in Bollywood. Following the penning of her colourful journey in the industry in the form of an autobiography — The Hit Girl — the actress speaks to us about her book, her journey in Bollywood, her battle with depression and a lot more.

How honest have you tried to be with your biography?
I have been as truthful as I can be and it’s not just about the films. It’s about everything that I have done in my life. It widely speaks about the stage shows, TV, my hospital and my time at Cine and TV Artistes Association (CINTAA). There were lot of things to be written about. I know the fact that everyone is interested to know about my personal life and we have written whatever needs to be written.

You have witnessed the industry so closely for all these years. What is the one thing you appreciate and one thing you don’t like today in Bollywood?
I think that the industry is doing very well in terms of technical advancements and I also appreciate the fact that more women-oriented movies are being made. The one thing that I dislike, however, is that we all are getting more westernised. We don’t wear saris and salwars, like we used to wear. Everyone wears gowns instead and we are aping the West. That’s very unfortunate.

You also admittedly, went into depression for a while. How did you overcome that phase?
I lost my parents and suddenly I was all alone. I didn’t know what was happening. I didn’t know how to manage things and get back to normal. I went into depression but it was more because I was suffering from anxiety. All my friends were there for me and that slowly helped me get out of it. I think that parents should be alert about their children slipping into depression and be there for them, instead of trying to convince them that they are not really depressed. If I can come out of depression, then anyone can.

Was there a strong competition when you ruled the industry? Also, having been in the industry for so long, could you tell us if Bollywood friendships are real or fake?
I would be lying if I say there was no competition, but it was a healthy competition. Besides, it was a different kind of set-up because everyone had their own style of working.

We can be friends — it’s definitely possible to keep professional jealousy aside for the sake of friendship. I am very close friends with actors such as Saira, Helen and Shammi aunty. We often go out to watch movies, or for lunch. We travel together as well.

When you look at your contemporaries who have all settled down with a family, do you also feel that you should have got married too?
Marriage was not on the cards for me I guess. It’s not as if I never got any proposals; I got quite a few of them. But nothing really materialised, so I never got married.

Do you feel like there are no interesting scripts being written for elderly actresses in the industry today?
It’s true; there aren’t really that many roles for elderly women, though I think that the situation is slowly changing for the better. In the West, especially, the scenario is changing and they write strong, meaty roles for older women. I am sure such a time will come to India soon enough.

You were the chairperson of Central Board for Film Certification. Today when you see the CBFC getting so strict, what do you think about it?
Censorship is essential and we have to be careful about the content that is shown in the theatres. Some people may have religious problems with the film, even riots might happen. I think that the CBFC is simply doing its job. I do think that there is scope to modify the guidelines though.

After coming such a long way, today, when you look back do you have any regrets?
Yes, I do have regrets. Every human being has them and I am no exception to the rule. I have my share of regrets. If you want to know more about them, you need to read my book.