Dancing in a trance 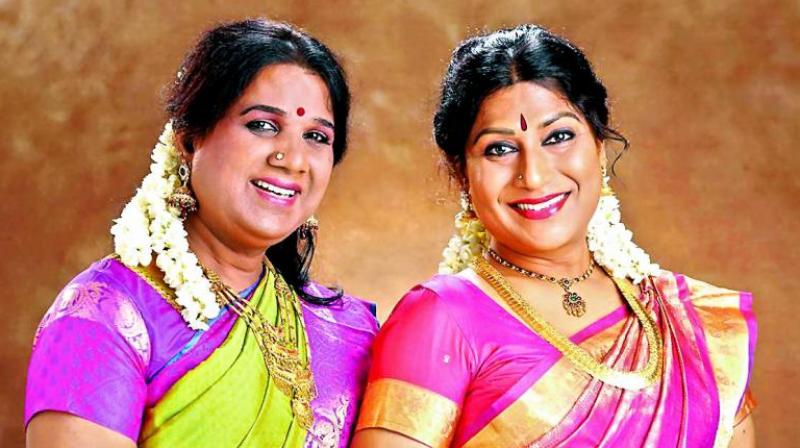 The soulmates, Sakthi and Narthaki

Padma Shri Dr Narthaki Nataraj – every single word in her name smells of blood, toil, tears and sweat. The first transgender artiste to be honoured with Padma Shri, the fourth highest civilian award in the country, Narthaki looks back at her journey through rejections, bravery, hatred, insults, perseverance and success.

Born and brought up in the rustic charm of Madurai in Tamil Nadu, Narthaki grew up among her 10 siblings, enjoying the love and warmth of a joint family. When she started experiencing the bliss of feminineness growing inside her male body, she couldn’t express it to anyone. She terms it ‘a beautiful feeling’. In the 80s and 90s, when society wasn’t open to gender diversity, when society decides for each person – what one should be, what one should wish for and if one should laugh at all, Narthaki soon became an outcast. Her only solace in the loneliness was the enlightenment of the feminineness and the dancer in her.

“We didn’t know anything about Bharatanatyam or dance other than film songs. Our introduction to dance was through the spectacular idols of the Madurai Meenakshi Temple, the Nataraja deity and actors like Padmini, Vyjayanthimala and Kumari Kamala,” she says. The pronoun she uses initially surprises one; why ‘we’? Because it has always been ‘we’ — the inseparable Narthaki and Sakthi.

Sakthi aka Sakthi Bhaskar has been Narthaki’s soulmate; they are friends from childhood. She clearly remembers that most precious moment of her life — the day they met. Alone, chased away by family and other children in the neighbourhood, Narthaki was sitting alone when she spotted another person like her — another outcast for her sexual identity. “I asked if we could play together then. We created a world for ourselves where we would happily play and dance; we have carried that world with us to this day. Sakthi is my friend, mother, guru and philosopher. I am her only world; there’s nothing beyond me for her. Whatever I am today is because of her sacrifice,” says Narthaki.

A few years elder to Narthaki, Sakthi has been very supportive and caring of her friend. The abuses they faced and the bliss of identity they experienced were the same. And they were determined that whatever happens, they would wear their gender identity on the sleeve and would never use it as a tool to gain sympathy or to scale heights. Narthaki says, “I was never hesitant to approach anyone with my identity – not now, not then. Even the Padma Shri has been accorded for my expertise as a dancer and not because I am a transwoman.”

Ostracism didn’t put down Narthaki’s determination or talent. A formal training was near-to-impossible at that time, but the universe conspires in strange ways. Says Narthaki, “It wasn’t me who found my guru, but my good fortune and destiny. My first teacher was Namanur Jeyaraman from the Thanjavur bani. We travelled all the way to Sivaganga to meet him. I was about 12. At the hallowed halls of his house, I saw the photos of Kamal Haasan’s sisters who had learnt dance from him. But Guru Jeyaraman was extremely ill and asked me to pray to Goddess Meenakshi for his recovery. A month later, I got a card from him to get a space ready for classes in Madurai. In the one year that followed, I learnt a full margam and got ready for my arangetram in 1983. My guru died a month later. It was as if God had kept him alive for a year just to teach me and conduct my arangetram. I started giving Bharatanatyam recitals after that,” she recalls.

Destiny had more wonders in store. When Narthaki and Shakthi danced at festivals and won prizes, to whoever who asked who their guru was, they said they would get trained under Vyjayanthimala’s guru! They didn’t even know who it was. Only later, from a magazine, did the duo come to know that it was K.P. Kittappa Pillai and that he was at Thanjavur. “We rushed off to Thanjavur to become his disciples. It was easier said than done. He would ask us to attend Vyjayanthimala’s recital in Bengaluru or Sudharani’s recital in Chennai and on seeing us there, he would wonder why we were there! It was hard on us financially, but we persisted relentlessly for nearly a year and miraculously, one day he announced, Come tomorrow. We will start class. We rushed back to Madurai and returned the next day with flowers and fruits as guru dakshina,” she says.

After training under Kittappa Pillai, a direct descendant of the famous Thanjavur Quartet brothers, the fathers of Bharatanatyam, Narthaki started giving recitals, propagating and preserving the Thanjavur style Nayaki Bhava tradition and rare compositions practised in ancient Tamil temples, which earned her name and fame. “Our friends asked us to move to Chennai to perform and continue our work of spreading the tradition of Thanjavur Quartet and compositions based on Sangam and Bhakthi (mystic) era literature. Chennai was a different world and honestly, we didn’t like it much. The city is where I earned fame and laurels, but my heart still lies in my Madurai village. I haven’t forgotten my roots and that, I believe, attributes to my success,” she adds.

Sakthi has been with Narthaki through the ups and downs, often shuttling between the roles of her makeup assistant, programme coordinator, compère and occasionally, a co-performer.  A strict disciplinarian, Sakthi also manages the training sessions for students. Narthaki stresses how fortunate she has been. “Every transgender person yearns for love. We never want to leave our home, but we are forced out. When thrown out, we have no options to survive. But I was very lucky that I had Sakthi by my side. Like the Tamil saying Tell me about your friend, I’ll tell you about yourself”.

Coming to the professional front, Narthaki’s dance productions are famous for their base in literature – not just Sangam and Bhakthi literature, but for collaborations with Punjabi, Odia and Telugu literature, and also with Tango dancers, Norwegian symphony, etc. How does she break the language, cultural barriers? She says, “Transforming literature to dance is a beautiful process as the language of dance is all about exemplified expressions. In one of my shows in Japan, I performed the Appar Thiruthandagam from Thevaram, a Tamil Shaivite work written during the Sangam period that talks about the liberation of soul. I presented a six-line poem in a 45-minute dance module. Last month, I performed in Amritsar and I researched on Punjabi folklore and classic literature before the event. I did stories and poems from Punjab. Likewise, I perform to Telugu keertanas in Andhra Pradesh and Odia poems in Bhubaneswar. However, a Tamil song is a standard component in all my performances as a mark of respect to my mother t
ongue. Language may be a barrier to speak but definitely not to dance.”

While dancing, Narthaki enters a trance, so does her audience. “I get elevated to a different level, forget myself and perform. People have told me that they have had divine experiences while I dance, but I don’t do anything special; it’s just the energy at that moment that passes on to everyone around,” she adds.

Her contribution in taking Thanjavur Quartet of Bharatanatyam to new heights has been great, but she calls it ‘simple’. “I want to take the art to the next generation unadulterated, just as how my guru had given it to me. I have had many critics say      that I do not innovate in my performance. I am not here to innovate; I am here to preserve and propagate the old, golden tradition.”

Together with Sakthi, Narthaki runs a dance school and a trust named Velliambalam Trust Nadan Kalaikoodam, the proceeds of which go towards the welfare of transgender community. For Narthaki, materialism doesn’t matter at all. “Gender, caste and religion are all for the material being. Being male or female or a third gender is natural; it’s your inner soul that you have to identify. I always believe that when we move on to the future, we should take our past with us. Our tradition and culture should be passed on to the next generation. In this fast-paced world, where art is becoming instant and fake, I want to show the world the real traditional Tanjore bani nayaki bhava and prove that real success lies in holding on to one’s roots.”

Even after performing all over the world combining Bharatanatyam and classic Tamil literature, Narthaki is still in awe of Tamil culture, “Our land is very rich in terms of culture. All our artworks are all from the soul. Even our God (Lord Nataraja) dances. Only in Tamil literature can one find a transgender form considered divine and respectfully referred to as Tirunangai (a holy woman). Earlier, I used to ask myself, why people accept Ardhanareeswaran and Lord Ayyappa, but never a person like me in flesh and blood. If I were a stone, I would have been accepted, but I was a living form and was shunned everywhere. During my research, I found out that epics that date back to the second century have transgender persons registered as ‘women’. I just stopped caring about people and perceptions after that.”

Now, the life story of Narthaki is included in the textbook of Tamil state syllabus. “Schools are where revolution begins. We couldn’t go to school or college, but now, learning about us, students would be kinder and encouraging towards their friends whom they find are different,” she hopes.

From a wounded and bleeding outcast, Narthaki has scaled great heights — won the Government of India scholarship twice, received the prestigious Kalaimamani award, became a top-grade artiste in Doordarshan, got recognition as an outstanding category artiste at the ICCR, bagged the Sangeeth Nataka Akademi Award, the President’s Award and now the Padma Shri. Her life has been an unbelievable journey, but Narthaki sums it up in a few phrases, “A lotus blooms from depths of dirt, like our success which blooms from pain and loneliness. Without the privilege of acceptance, family support or social backing, Narthaki and Sakthi cleared the rough road we travelled to create a beautiful path, which is open to all human beings driven by passion.”