I am happy and at peace with my life: Tabu

Tabu, who has set a benchmark in Bollywood with her movies, talks about finding a mentor in Gulzar, the gender parity, and her chance with luck. 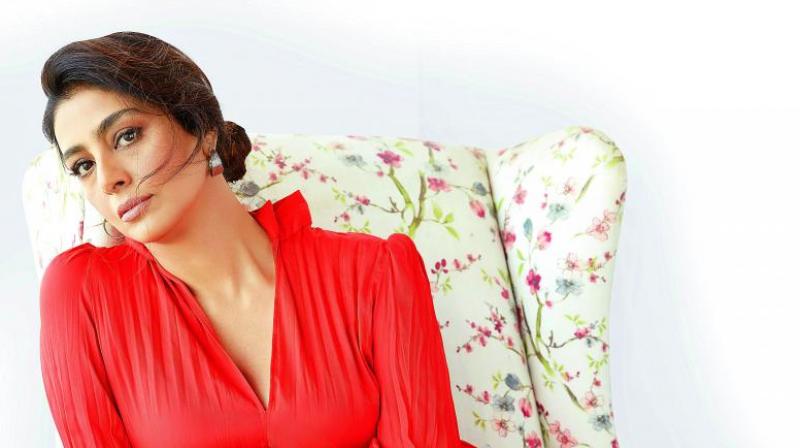 Talent along with a fair amount of luck are perhaps two factors that play a critical role in an artist’s life. And when it comes to the talented Tabassum Fatima Hashmi, popularly known by as Tabu, it seems that she has had a fair share of both. The actress, who has created a name for herself with films like Astitva, Chandini Bar, Maachis, Virasat, Drishyam and Haider, among others, never experienced a saturation point in her career. Even now, when she is all set for her next silver screen outing in De De Pyaar De, there’s no looking back for her.

Collaborating with her close friend Ajay Devgn yet again, Tabu will be seen essaying the role of a wife whose ex-husband is dating a younger girlfriend. Consequently, Ajay (50) will be seen romancing an actor half his age in the film.

While storylines with older male characters romancing younger female characters have almost become a norm in Bollywood  films, the converse is hardly seen or rather treated as a taboo.  Hence, talking about whether she feels that men can get away with anything in movie plotlines, the actresses says, “It is not right to say that men can get away with anything. The stories will go in the direction of what the audience is ready for. It is also reflective of our own society, mindsets, and barometers.”

Furthermore, the actress, who has almost four decades of experience in Bollywood, foresees a change, as she is positive that more women-inclusive narratives will see the light of the day in the future.  “Women form such a large part of the audience that their choices in general will finally reflect in the popular arts also. We have seen heroes beating 100 people and still surviving and we have only made them hit as it is the taste of the audience.”

While her commercial films such as Biwi No 1, Chachi 420, Hera Pheri and others did find their own place in her filmography, it was Gulzar’s Maachis(1996) that served as a breakthrough in her career.

It’s only natural for her to hold him in high respect as she reveals that the poet-director made her who she is today. “Gulzar sa’ab played a vital role in discovering my own abilities and becoming confident about my talent as an actress. I didn’t even realize how he was doing it. It happened so easily and he is a godsend for me because usually after ages, you start gaining confidence but I got it so early in my life,” she says.

Tabu even went on to win the prestigious National Award for her role in Maachis. Ever so grateful of the tutelage provided by Gulzar, she reminisces.  “Somebody like Gulzar validating you and appreciating the work you are doing means a lot even when you are not even putting as much effort. So he makes it easy and you get a National Award for it. I think, personally for me, I started finding myself after working with Gulzar.”

The actress is also known for having played a sundry of roles. Even though she took up the challenging role of a mother in Astitva when she was barely 30, and even later in Drishyam and Haider, she somehow swerved from getting typecast.

“Yes, I don’t know how I got away with that. Actually, I don’t think I saw it as a ‘mother’ or ‘sister’ because I don’t like to label my characters. The fact that she is somebody’s mother always came secondary. I have to be happy with what is offered to me to do in the film. If I have gotten away with it, then great because you don’t want to underline the fact that she is a mother,” says the 47-year-old actress.

Further, the actress revels that her heterogeneous roles have rather helped her in not doing the same kind of movies over and over again. “In fact, I have been offered every genre, be it glamour, swimsuit, sari, Hollywood, Telugu, and horror, so I think somewhere I am happy that writers did not typecast me in their heads. It is very easy otherwise but I always had choices in my plate,” she says.

Despite having such illustrious films to her name, the actress too had to face the brunt of the gender pay gap in Bollywood. In a previous interview, she had even mentioned how she was always paid less as an actor. However, now that she has proved her worth film after film and she is happy with the remuneration she gets. “Thankfully, yes, things have changed. I have worked hard enough to be paid according to my worth. The time is also right, in the past few years, everyone got to know what I am bringing on to the table,” she says proudly.

Although, the actress knows the workings of the industry, she points out that at the end of the day, the only measure according to which one gets paid in Bollywood is one’s talent. “I don’t know if there was a fair distribution then, but it also depends on your equation with the producer and how much you think you are worth  at the box office. Finally, people will pay according to what you bring to the table, regardless of whoever you are,” she adds.

While the 47-year-old actress has made some individualistic choices in her professional life, her personal life too boasts of some unconventional choices. Unlike her contemporaries, Tabu, who is one of the most beautiful actresses, never married and chose to remain happily single. “I don’t miss anything about being not married. Not for a single day in my life, I have thought otherwise. Had I missed being married, I would have done it a long time ago. It was the easiest thing for me to do. But there is no void, and I am happy and at peace with my life,” she affirms.

As everything seems to be working out for an unassailable Tabu, it’s only fair to wonder if she believes that along with her talent, luck too played a big role in her life. “In my case, it was luck along with the wise choices that I made. Also, there will always be the ‘x’ factor which one cannot explain so we just have to leave it. The luck factor is all about timing. Somewhere, a lot of things are coming together to make things happen,” she says. Believing timing to have played a significant role in her career graph, Tabu believes that’s how she got lucky with the esteemed director Ang Lee’s 2012 movie Life of Pi. “I got Life of Pi because Ang had seen The Namesake. You really don’t know what is the chain of events that has led to your success or accomplishments,” she concludes.