2016 Fear vs Hope: The end of television started this year

A Colombian drug lord, three former BBC employees and Kevin Spacey have initiated an invasion that could kill off the daily soap. 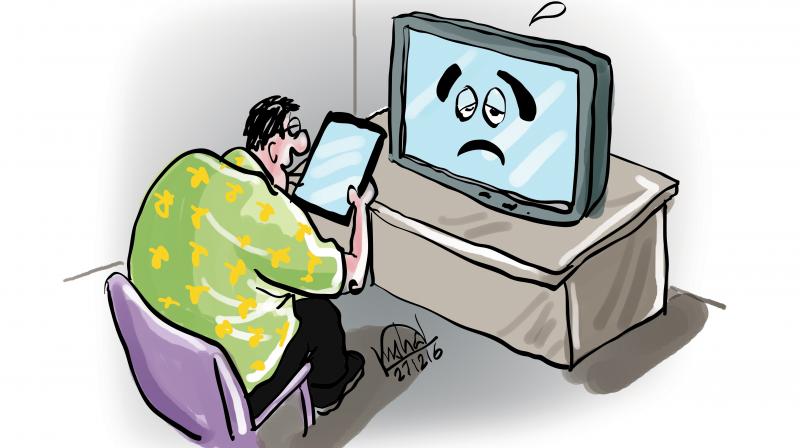 The teams are already being readied. Netflix has tied up with Shah Rukh Khan’s Red Chillies and so has Apple.

On-demand streaming. A technology that was developed two decades ago has returned with absolute might to disrupt present-day cable television, and our gym schedules. The impact has been immediate and universal.

Netflix, one of the leaders in the business, has caused a 50 per cent drop in American TV watching. It’s estimated that its 86 million worldwide subscriber base spent 10 billion hours a month hooked up to the service. And it’s not just bored Americans. Forty-two per cent of the subscriber base lies outside the United States. And while you consider the numbers, remember this — this is a tech company that started off with 30 employees and a $15 IPO 14 years ago. Today, Netflix stock is worth $125.59; the company is being valued at $32.9 billion (more than CBS) and has 3,500 employees — and they have been streaming content for just nine years.

America’s all-powerful entertainment gurus had inititally refused to even acknowledge Netflix. In 2010, when the New York Times asked Time Warner CEO Jeff Bewkes for a quote on the streaming service — which had just jumped from 7.5 million to 12 million subscriptions — he rudely dismissed the Californian firm. “It’s a little bit like, ‘is the Albanian Army going to take over the world’? I don’t think so.” This upset no one... neither the Albanians nor Netflix CEO Reed Hastings. Hastings instead, wore the comparison like a “badge of honour”. “For the next year, I wore Albanian Army dog tags around my neck. It was my rosary beads of motivation,” Reed was quoted as saying.

Four years later, Netflix rose 19 per cent, without a single advertising break. And as 2016 ends, Netflix and Pablo Escobar are not the only ones vying for our attention. Amazon Prime has arrived in India bringing with it billions in investment and some of the most-watched shows on the planet, including The Grand Tour, from three former BBC employees. Prime’s for the taking for all of Rs 499, annually!  There’s Hotstar, with its focus on sports and regional content for just Rs 199 a month, Airtel movies offering packages as low as Rs 49 a month and an entirely free service called Voot. After a few minutes on the calculator, you’ll notice that Netflix is the most expensive of the lot, with the premium high-resolution stream needing Rs 800 from you, every month. What also sets them apart is their content catalogue. 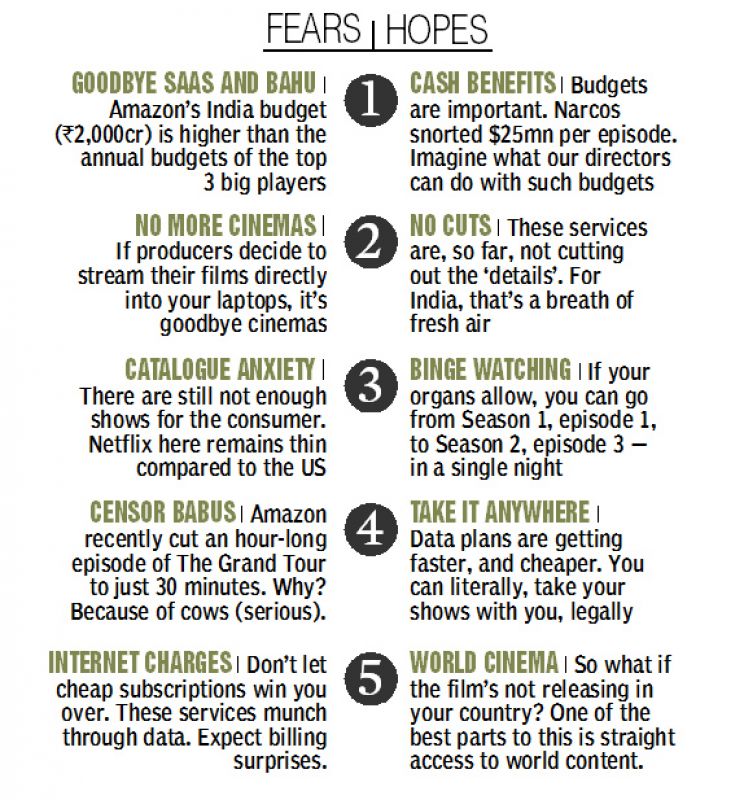 Much like Netflix, Amazon will be setting up meetings with Indian content creators to prepare a desi catalogue of shows —everything from much-loved mythological fiction to comedy.  The latest entrant already has a competitive list — from the delightful Mozart in the Jungle to the absolutely thrilling The Man in the High Castle. For India, its plan is to take what has worked well, package it using incredible budgetss and set no limits. It’s called ‘blue sky thinking’ and depending on what side of the PowerPoint presentation you are on, it’s a world of possibilities.

“So, you take your rona-dhona soaps, add a million dollars in production budget and what you have are brilliantly-shot back-to-back episodes that you can’t tear yourself away from,” says a TV content creator.

Amazon’s blue-sky vision is the particularly troubling part for traditional made-for-cable directors. For India, it has announced 18 original TV shows. “Imagine this. The guy with one of the world’s biggest wallets had just knocked on your door. He likes what you have done, wants you to make content for him and has the risk-taking ability to give you a free rein. This is blue sky vision... an absolute lack of any restrictions. These are no longer tech companies that stream shows. They are production houses churning out award-winning titles,” adds the Bombay-based legacy TV show maker.

The teams are already being readied. Netflix has tied up with Shah Rukh Khan’s Red Chillies and so has Apple. Hotstar can bring sports into bed-time and Amazon has roped in Vishal Bhardwaj, Vidhu Vinod Chopra and SS Rajamouli. All three men were responsible for some of the biggest movies ever made — raking in crores at the box office.

Video streaming services, like chocolate ice cream cones, will never lose their charm. They will only get better and they will get so good you will  be ready to change a lifestyle to accomodate them

It is also expected that these services will become the new TV by 2020. But as far as TV-like disruption from the 90s is concerned, they have already arrived.