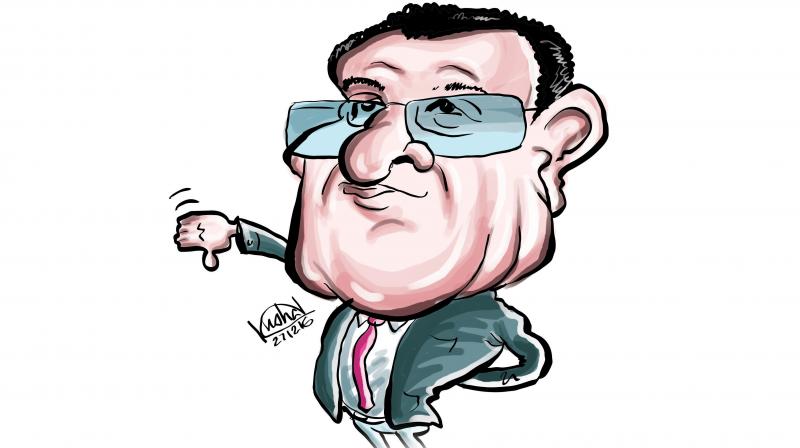 This year has been disappointing for many. But, for some of us, entire careers and relationships have ended. A Clinton lost in this year’s big election upset, Rahul Gandhi’s corruption earthquake shivered and died, the man who was supposed to lead a gigantic all-Indian company to newer heights was shown the door and the very definition of supercouple will usher in 2017, alone. Here are the duds of 2016.

Cyrus Mistry
Tata, bye-bye
He was handpicked by Ratan Tata, and not many are. Cyrus Mistry, son of the largest single shareholder in the Tata conglomerate, had an extremely unceremonious exit from the company. He had succeeded Tata after the latter’s 21 years as the boss and his appointment was, at the time, seen as a promise of continuity, he was the ‘trusted heir’. It was a career on a silver platter. But four years later, the man once described as the most “important industrialist in both India and Britain”, found his access revoked. The very public fallout after the firing of October 24 continues and the strangest part is the reason Tata Sons has come up with. The company claims Mistry’s methods had been in violation of the Tata spirit, that he had endangered the founding principles behind its 57 interests. Mistry, meanwhile, has alleged widespread irregularities and presence of a rigid system that was not pro-change. He has refused to go down quietly and there’s still furious bubbling. The Tata chaos, then, makes this list because of a very public spat — the sorts that leave a bitter taste in the mouth.

Rahul Gandhi
Surprise, it didn’t work
It’s not often that someone promises an earthquake. Rahul Gandhi did and very soon ended up staring at one of the biggest political duds of the year.

Gandhi had claimed he had evidence revealing “personal corruption” of  Prime Minister Narendra Modi. But on the day of the big reveal, the plan sank faster than the Titanic. Gandhi alleged that Modi, as the chief minister of Gujarat, had received kickbacks worth over Rs 40 crore from the Sahara group. The Congress vice president also brought up the Birla diaries — part of a document that was recovered by the CBI from the personal computer of an Aditya Birla group executive. However, the trouble was that these allegations were a rehash of what was brought up by Arvind Kejriwal. The matter is with the Supreme Court, brought there by activist Prashant Bhushan. Gandhi’s ‘sequel’ was panned by those expecting an earthquake and it was immediately clear that the tactic had failed to cause any seismic shifts.

Hillary Clinton
Farewell, washington
A few hours before the November 8 US presidential polls, estimates by reputed news outlets said Hillary Clinton had a 98.2 per cent chance of winning the race to the White House. But on Election Day, she lost the race within five hours. The Clinton defeat marks the biggest political upset America has witnessed in decades. A man who had never held a government office, who had proudly claimed that fame allowed him to grope women and who had famously objectified both his daughters defeated a former senator, a former First Lady and former Secretary of State. Analysts would later claim her lackluster campaign had isolated millenials, that she had not paid attention to white voters and that she was over-confident and often, even “boring”. But nobody had predicted an outright Trump victory. The tycoon’s campaign had resorted to every possible trick in the dirty-fighting book — even bringing those who had accused Bill Clinton of rape, to a press conference ahead of a debate. The defeat marks the end for the Clintons’ political aspirations and marks the start of a very unpredictable presidency. Because into this unstable world of today, enters a man who Harvard doctors suggested, needs a “neuropsychiatric evaluation” before assuming office.

David Cameron
And All he wanted was EU
In the months leading up to Brexit, the former British Prime Minister and his supporters designed their ‘Remain’ campaign primarily around economics. They were heard telling voters, “it’s safer in the EU” and leaving would be a “leap into darkness”. Cameron himself had started the countdown. In 2013, he had assured British citizens that they would have an in-or-out referendum and 2016 was picked as the year of choice. He then assembled the best PR tacticians in town and had them working from 6am to 10 in the night — strategising, suggesting and organising. But on June 23, Brexit exploded in their faces with 53 per cent of England voting out. Cameron’s team was accused of ignoring Britain’s frustrations with rising immigration and failing to comprehend realities.

The press was on the attack and his decision to give Barack Obama a starring role in the Remain push backfired spectacularly. Team Leave was even leading in later polls and that stymied Cameron’s supporters. “I can’t believe people are really going to vote themselves poorer because they don’t like the Poles next door,” a former Cameron adviser was quoted as saying in the run-up to the referendum. But Britain did vote to leave and Cameron, the Prime Minister who had set his country down that road, had to call it a day.

Brangelina
Knock, knock FBI
The world’s most recognisable couple split this year and it became so dirty, the FBI got involved. The husband has been accused of being a pot-smoking, laze-around who struck one of the six kids on a flight. The FBI interviewed Jolie for hours on the matter. The child abuse charges against Pitt were later dropped and the FBI announced that their investigation into Pitt had been closed. Jolie and Pitt were the very definition of “supercouple” when they wed in 2014. There were thousands of magazine articles, newspaper headlines and the couple even sold their wedding photos for $5 million — which later went to charity. But today, Brangelina lies in pieces — only remembered by a few photos of the parents and the brood of six moving through airports and a 2015 movie, starring both, which was about a couple who barely speaks to each other.

Saina Nehwal
Eat, play, recover
For the first time since 2009, Saina Nehwal — once the very face of badminton in India — finds herself out of the top 10. She has been missing from the international circuit and her disastrous tour of Rio saw her return with an injury she spent the rest of the year recovering from. And her most recent matches haven’t been smooth either. Nehwal immediately lost against Thailand’s Porntip Buranaprasertsuk at the China open. Buranaprasertsuk has a worldwide rank of 14 and has never earlier been able to dislodge Nehwal’s intense matchplay. But yes, the 26-year-old Hyderabadi’s year has been a rough one. There’s still tremendous ability though. Nehwal is known for pure grit and towards the end of 2016, she thrashed Buranaprasertsuk at the Hong Kong open and rallied on until she was stopped by Cheung Ngan Yi at Macau. Nehwal is far from calling it a day and comparisons to P.V. Sindhu don’t make much sense because Nehwal has achieved stupendous succcess in an unbelievably short duration. In her trophy case are 22 international titles including seven Super Series crowns that prove she is the storm that has not waned.

Keith Vaz
Party of the year
The UK’s longest serving British-Asian MP was the cause of a sex scandal involving cocaine, a group of Romanians and some very colourful language. Never has a reputation gone this far south, this fast.

Dubbed ‘Vazeline’ because of an uncanny ability to slip out of scandal, Vaz’s vast reserves of luck and influence ran out when the all-seeing British tabloids splashed front page photos of him and a Romanian “rent boy” just hours before a party in August this year.

What made this even more humiliating for Vaz were the details. The MP was actually being filmed and he’s heard discussing the unprotected “mechanics” of the night, allegedly agreeing to buy cocaine (although he didn’t want any for himself) and money. All this from the man who checks crime, immigration and drugs policy for the UK. The fall from grace was immediate. He quit as chair of a home affairs committee and profusely apologised to his wife who admitted she wanted to “break all the crockery on his head”. But there’s a reason why he’s known as Vazeline. In November, Vaz was officially back after being appointed to a committee looking into the UK’s Criminal Finances Bill — designed to tackle corruption and money laundering.