Jagan reinventing himself in Modi’s image 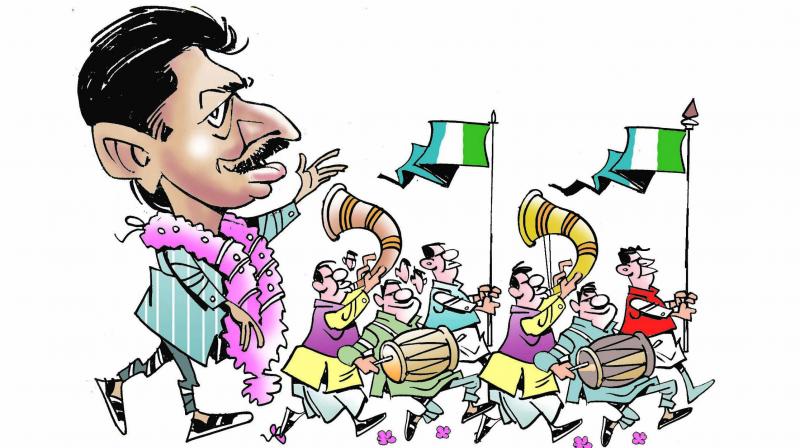 Jagan Mohan Reddy decided it was his first test to showcase a difference; wherein he would not be found doing doublespeak while in opposition and after coming to power.

The first 100 days of a government are a great yardstick to gauge — and project — the course of the term, without underestimating either the power of course-correction available to those in power, or the adage that two weeks is too long a time in politics. So it is with the debut of the YSRC party’s government in Andhra Pradesh.

Expectations from a reign differ when a scion inherits a throne, or earns it.

Andhra Pradesh Chief Minister Y.S. Jagan Mohan Reddy, is one of India’s youngest political leaders. He is sometimes an enigma, at other times an open book. He is the latest sensation outside the saffron fold, amongst the few of relevance in the country. He is rapidly reinventing himself, but unlike lazy assumptions that he would be cloning his late father Dr Y.S. Rajasekhar Reddy, he is carving himself in the mould of India’s most successful role model in contemporary times — Prime Minister Narendra Modi.

YSR’s WELFARE MODEL
There is a definite investment of political capital in large-scale spending on welfareonomics, Jagancare if you wish, in risking every resource of a state to re-carving the role of a government as a total custodian of paternal welfare — healthcare, education, old-age pensions, housing, and even moral uplift bordering on policing - restricting liquor consumption — all of which Reddy draws as much in spirit from his late father, as Modi in its modeling and nature of roll-out.

In his mind, Reddy might well think — as several Telugu political leaders believe, that Modi himself drew extensively in his brand architecture from them — infrastructure, reforms and development modeling from N. Chandrababu Naidu, welfare, especially universal healthcare from Y.S. Rajasekhara Reddy, and investing money directly into farmers over agriculture and having an integrated water management from K. Chandrashekar Rao — that he is on continuum of a legacy to give a hospital bed to every poor citizen when he needs it.

IN QUEST OF CLEAN IMAGE
Consciously or not, Reddy almost stops imitating his father and seeks a political image closer to Mr Modi from thereon. This is illustrated in his seeking a clean image, as a crusader against corruption — while YSR was oblivious to corruption charges, assured that a corrupt leader would still be loved for a successful trade-off with effective welfare delivery, and took care in not making any assertions of zero-corruption in his administration — Jagan is clinically handling his perception of how his government would handle public monies.

Taking a high moral ground, constant reiteration that he would cleanse the system, he is quickly, and easily, tracing a path set up by Modi — a man who is seen as not only clean, but as one who would neither spare opponents nor his own partymen in matters of graft. Mr Reddy is getting the moral Teflon coat perhaps as a political necessity given his continuing CBI and ED cases in matters of quid quo pro.

Reddy as most Indian politicians are in envy of how all Rafale deal allegations failed against Modi, who harnessed his reputation to turn the chowkidar jibe into a campaign. Hence, if the Telugu Desam dubbed late Dr YSR as the ‘Raja of Corruption’, Reddy is flinging the muck back, calling Naidu the ‘Emperor of Corruption’.

MAN ABOVE PARTY
Most great leaders transcend their parties. Mahatma Gandhi was greater than the sum of the rest of the Congress, as was Pandit Nehru or Indira Gandhi. PM Atal Behari Vajpayee was not just above, but different, from his party — ‘right man, wrong party’ et al, which actually helped him lead his party to power, and the first-ever non-Congress government to complete a term. Even a YSR was above the Andhra Pradesh Congress — people voted more for him, not for the party.

But few leaders in contemporary times have stood so much higher in popular rating over their own party as Modi. This facet, along with the ‘above-corruption’, crusader for clean politics image of the PM, Reddy dearly yearns for and is striving for in his re-make-up.

The bet of the Andhra Pradesh government, in the run-up to marking its first 100 days soon, is that people of the state will judge the government only as much as they are in love with and trust Jagan Mohan Reddy. Leader is the government, and therefore, the brand of the leader stands far above the sum of the parts — an acknowledgement that not just election campaigns but performance appraisals too have assumed a de facto Presidential format in the minds of the voters.

BE STRONG, BE DIFFERENT, BE DISRUPTIVE
With a conviction of placing the highest onus on the aura of the leader, and relegating others to near irrelevance — no number twos here — Reddy took the first call on an issue where most other parties are in operational sync — armtwist opponents till they join the ruling party as a strategy to weaken the opposition.

In the first electoral term of the bifurcated Telugu states, between 2014 and 2019, it was hard to decide who better engineered large-scale defections from rival parties — while Rao nearly emptied the YSRC and TD in Telangana, and almost reduced to naught the presence of Congress in his second term — Naidu broke YSRC with a roll-call approach to inducting its members.

Jagan Mohan Reddy decided it was his first test to showcase a difference; wherein he would not be found doing doublespeak while in opposition and after coming to power. He refused to induct any TD  MLAs after winning. He does not need them anyway.

“If you want to join my party, resign from a position you got from people on a TD  platform,” he told them.

WEARING RELIGIOUS IDENTITY NO ELECTORAL LIABILITY
Reddy is as staunch a Christian as Modi is a Hindu or Assaduddin Owaisi is a Muslim. He does not wish to evade it or apologise for it, even now he is ready to push in the other direction, if he can. There was a little spiritual sojourn to morph that image before elections, where in a rare borrowing from most other leaders, including Rahul Gandhi, Mr Reddy went on a temple visiting spree, but come his swearing-in ceremony, he made no bones about being first blessed by Christian pastors, before making it an all-faith spiritual mélange — mullahs and pandits followed in that order.

JAGAN, HOWEVER, NEVER CAN BECOME A MODI
Reddy has several fault lines. Unlike his father, who could afford the welfare bill with an economic boom, his clout in Centre given the same party rule, and a united Andhra Pradesh with Hyderabad as capital — Jagan has none of the advantages. Unlike Naidu’s stint in 1999-2004, which was extremely low in welfare focus, the TD  itself pushed the spend on direct benefits to the subalterns extensively between 2014-19, thus pushing Reddy to up the ante, and expenditure.

Without a Hyderbabad, without a special category, without an overtly and too-friendly a Centre footing bills, without a booming economy - the noose around the neck would most likely be comprised of the economic threads. Corruption can be an effective issue with perception management against Naidu — but when BJP comes knocking as prime rival, Reddy may not be found as clean. And being a staunch Christian can even more easily become a basis to target him as anti-Hindu. In which case it would be: checkmate.