Sri Lanka: Return of the Rajas

In the new President, Gotabhaya Nandasena Rajapaksa, Sri Lanka and its international interlocutors have a mixture of both. 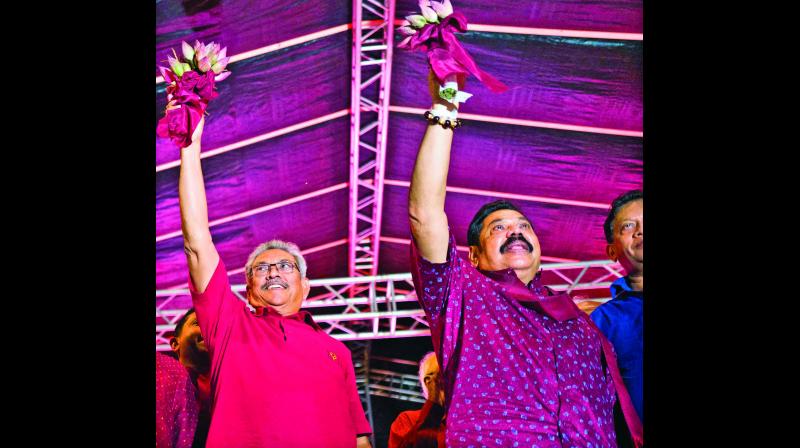 In more ways than one, it is the return of the native for Sri Lanka. Barring the election of lesser-known veteran, outgoing President Maithripala Sirisena in Elections-2015, the nation’s politics has revolved round known parties and personalities - not necessarily in that order. In the new President, Gotabhaya Nandasena Rajapaksa, Sri Lanka and its international interlocutors have a mixture of both.

They all have known him, and also have perceptions of him, from his days as war-time Defence secretary under brother and President, Mahinda Rajapaksa (2005-15). While being ‘pro-active and decisive’ on the security front, the world too knows little of the man’s political vision, mission and delivery mechanisms, as was the case with Sirisena. But then, he is not going to be a push-over, whether inside the country or outside.

Much has been written about the Rajapaksas and all controversies surrounding them, in terms of war-time crimes and accountability issues, the ‘China factor’ and the rest. Independent of the truth or otherwise of the matter, two facts stand out. One, Sri Lanka has voted them back to power, with Mahinda Rajapaksa declaring himself brother Gota’s Prime Minister - if the latter was elected to power - long before the poll process had commenced.

Two, after the failure of the outgoing Government of President Sirisena and his estranged Prime Minister Ranil Wickremesinghe, it should once again dawn on the war-victimised Tamils in Sri Lanka and the international community that it is back to the Rajapaksas when it comes to finding a constitutional solution to the ‘ethnic issue’ in the island-nation. That is to say, if the war-victors in the Rajapaksas cannot deliver a negotiated settlement to the vexatious issue, no other leader and party could be expected to do so - as the past five years have shown, since.

The new President has between now and September 2020, when alone the Geneva-based UNHRC is expected to take up the ‘war crimes probe resolution’ for an actionable update, based on the resolution passed in March this year. However, Gota, his Government and the party will also be tied down to the stalled Provincial Council elections and also parliamentary polls, which are due by August 2020 but could come through much earlier.

More that the processes, until the new President and his team has a comfortable majority in Parliament, whether in the outgoing one or not, but definitely in the upcoming one, his arms and feet would be tied. It is another matter what kind of political solution that his party and Government envisages, and what ‘minimalist’ demands that the Tamil polity and society would see as acceptable.

West at a crossroads
Having flagged war-crimes probe, at times independent of a political solution for the Tamils of the island-nation, the West has been put at a crossroads since. When the US-led West moved the UNHRC resolutions after their calculated post-war gamble to flag it as the UN Security Council (UNSC), even if informally, failed owing to veto-threats by China and Russia, the Mahinda regime in Colombo flatly declared their decision to boycott it.

Now at the commencement of Gota’s poll campaign, they reiterated the same. President Gota R has since appointed commander of the Sri Lanka Army’s 55th Division, Maj-Gen Kamal Gunaratne (retd) as the new Defence Secretary. He would be working with Army chief, Lt-Gen Shavendra Silva, who was the commander of the equally controversial 58th Division during war-time. The latter was an appointee of the outgoing Government. The US and the rest of the West did declare that it would be difficult for them to work militarily with Sri Lanka with Silva’s continuance in office, but did not go beyond words at the time. The Sirisena-Wicrkemesinghe duo, otherwise at loggerheads during their last months and years in office together, did not react, or bother.

China angle
The question then arises if China would return to occupy the centre-stage in Sri Lanka’s foreign policy affairs despite President Gota’s declaration that his Government would stay neutral. There again, the ‘international community’ especially has more to introspect. The Rajapaksas still cannot explain convincingly how and why they needed to fast-track China-funded Hambantota Port Project, a legacy from the previous administration of President Chandrika Bandaranaike-Kumaratunga (CBK) - but a dream of all Sri Lanka for years and decades earlier.

Yet, when the ‘duo leadership’ went in for a snap ‘debt-to-equity’ deal with China on Hambantota and handing over Sri Lankan territory to Beijing, no member of the international community felt cheated, or protested. What more, the Government also went in for a further $ 100-m China loan for building expressways of the kind that the Rajapaksas had excelled in.

Shifting ‘goal-posts’
Yet, it the world and also global human rights watch-dogs and also local communities and NGOs felt more at ease with the outgoing Government compared to the Rajapaksas, it owed to the ‘sense of freedom and openness’ that they had come to represent even before the polls - and one aspect of public life that they preserved till the end. For the international community, at times including the Indian neighbour, the Rajapaksas came off as shifting their self-set goal-posts time and again, be it on the post-war political settlement to the ethnic issue or on the China-related geo-strategic security concerns.

The lid blew off on the Beijing-centric security front when the Rajapaksas allowed Chinese subs to berth at the Colombo Port, despite India reportedly expressing concern. On the burning ethnic issue, they were not entirely wrong but did not seem to have briefed the progress purportedly made in the political negotiations with the Tamil National Alliance (TNA), representing the war-affected community.

With the result, when the TNA walked out of the talks unilaterally, blaming it all on the Rajapaksas and demanding international war-crimes probe, the Rajapaksas were not only peeved reportedly - but also felt being used until the world was ready to arraign them. Today, all stake-holders need to realise that much has been lost to pre-suppositions and mis-communication, to put it mildly. The Rajapaksas, the TNA and the West all need to revisit the last five years and more, and all-acceptable solutions to multiple issues entangling Sri Lanka to the present are hidden somewhere there.

India, as a neighbour, stake-holder, benefactor and beneficiary, all rolled into one, need to do it all - from soul-searching to ethnic facilitation, if and if only called, and go beyond to clarify its demands and positions on the geo-strategic front. There can be hopes of better coordination and collaboration, now that the two nations are known to have common concerns and seemingly shared intelligence (whether or not acted upon) and approaches to ‘internal security issues’ of the ‘international terrorism’ kind, as displayed at the ‘Easter Sunday serial-bombings’ in Sri Lanka, where the Indian alerts went unheeded, all the same.

THIRD TIME PM
Former Sri Lankan President Mahinda Rajapaksa was also prime minister between 2004 and 2005 and again for 52 days during last year's political crisis before the Supreme Court ruled his appointment unconstitutional. He will now head a minority government as elections cannot be held before March 2020. After that, President Gotabaya is most likely to call early elections to facilitate Mahinda becoming the PM and ultimately replace Executive Presidency with Westminister system where the PM is the Chief Executive.

HOW SOUND IS LANKAN ECONOMY?
International credit rating agency Fitch warned that the new president Gotabaya's  pledges to increase social spending, public-sector wages and pensions could jeopardise cutting Sri Lanka's public finances. Earlier this month, the IMF released the latest tranche of a $1.5 billion bailout that was suspended in October 2018 during a constitutional crisis last year. Coupled with expected bond issues this should ease near-term concerns about Sri Lanka's debts. "But external debt repayments are substantial at $19 billion in 2020-2023 against reserves of $7.8 billion," Fitch said. It said that any rollback of economic reforms of the previous government could have implications for Colombo’s relations with the IMF.

(The writer is a Distinguished Fellow at the Observer Research Foundation, Chennai Initiative)