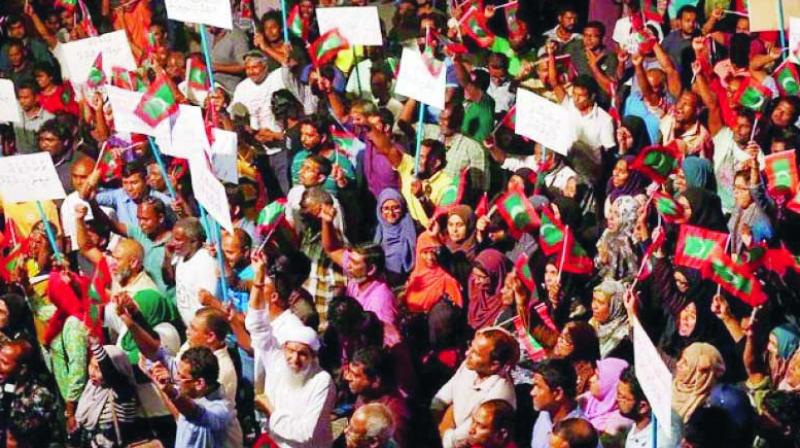 India is being forcing to choose between the high road and the messy, contentious road. (Photo: AFP)

Yameen ordered the arrest of Supreme Court justices, sacked the police commissioner who sought to enforce the Court’s decision, and empowered the security forces to make arrests and disperse public gatherings. While India has condemned the declaration of a state of emergency, China has tacitly backed the Maldives government’s actions, creating yet another flashpoint for regional competition.

Viewing itself as a “big brother” to the Maldives, India has taken an interest in the stability of the country in the context of its vision as the dominant power in South Asia. It intervened to defend the Maldives government from a coup attempt in 1988 and subsequently both countries enjoyed strong economic and political relations. However, these relations eroded after President Nasheed’s ouster in 2012 as China initiated significant infrastructure projects (including some that India had intended to undertake) and signed a free trade agreement with the Maldives in December 2017. China sees the Maldives archipelago as a key node in its Belt and Road Initiative while India sees Chinese encroachment in its backyard as threatening, particularly after the PLAN sent three warships on a port call to the Maldives last year.

Similar to what it did in Doklam and other parts of India’s neighborhood, China’s support for Yameen in the garb of stability and prosperity has placed India in a bind, forcing it to choose between the high road and the messy, contentious road. If India supported diplomatic condemnations but opposed active intervention, it would distinguish itself as an upholder of the “rules based order” and the “free and open Indo-Pacific” but could cede ground to rising Chinese influence and power projection. If India intervened militarily to safeguard serious strategic interests, others in the region could view India as autocratically as China, diminishing its influence and credibility as a defender of the liberal international order, particularly in the eyes of its revived Quad partners.

India fears “debt traps” set by China that could lead to land grabs and a potential military foothold on the archipelago. China sets these traps with expensive infrastructure and white elephant projects financed by loans, masquerading as aid, which China then trades for equity stakes in the country’s critical infrastructure if a country cannot re-pay the loan. Such an action in the Maldives would be threatening to India for two reasons.

First, the expansion of Chinese influence in the Maldives could pose significant military consequences for India. The Maldives is a series of atolls composed of almost 1,200 islands whose northernmost point is located roughly 450 km from India’s southern coast. If China controlled some of these islands (or engaged in new island building), it could establish listening posts and naval facilities to monitor Indian naval activity or even construct air and naval bases to threaten the Indian mainland or sea lanes of India’s trade and energy supplies.

Second, India’s ability to maintain its influence over the Maldives is a litmus test of whether it can fulfil the role of “net security provider” in the region. After a string of setbacks in influence in Sri Lanka, Nepal, and Bhutan, an erosion of influence in the Maldives feeds the perception that China is eroding India’s sphere of influence. Perceptions of power matter as much for deterrence or compellence as actual material capability. In such an “emperor has no clothes” moment, not only would India suffer a loss of prestige, but India’s reputation as the most consequential state in South Asia would be hollowed.

Hawks and moderates have both called for intervention, and there is some perception of US support for Indian intervention in the Maldives, but the Indian government has demurred from such action.

It seems highly unlikely the Indian government will intervene militarily in the Maldives as it did in 1988. Interventions today are messier, especially in a more competitive region, and could trigger greater resentment, blowback, and overextension. Instead, India could summon political and economic means to bring pressure on the Maldives government and induce a course correction, much like it did in Sri Lanka in 2014-15. For instance, tourism is the most important industry for the Maldives accounting for a third of its GDP, more than half its foreign exchange, and over 60% of total employment. While India only composes a small share of tourists, its Quad partners and their allies together compose 35% of foreign tourists and likely a disproportionate share of tourism spending. The ongoing crisis has already had a significant impact on the industry and India could use diplomatic methods and information campaigns further accentuate the pressure, as needed.

The author is a Senior Associate and Co-Director of the South Asia Program at the Washington D.C.-based Stimson Center.