The outrage against the proposed delimitation of Assembly constituencies in Jammu and Kashmir needs to be understood in its right context. 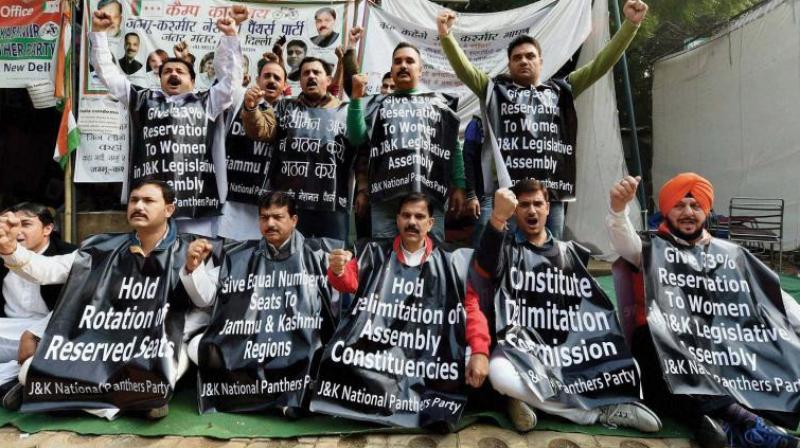 Activists of Jammu and Kashmir National Panthers Party (JKNPP) shout slogans to protest the alleged neglect of J&K by the Centre in the process of delimitation, at Jantar Mantar in New Delhi. (Photo: PTI)

The outrage against the proposed delimitation of Assembly constituencies in Jammu and Kashmir needs to be understood in its right context.

Soon after the new Home Minister took office, it was widely reported in the national media that the Centre was considering an early redrawing of the constituency boundaries in J&K in the run-up to elections, with an express purpose of having a Hindu Chief Minister.

Since its inception in 1925, RSS has never shied away from its civilisational project of Hindu Rashtra, so in a State with 68 per cent Muslim population, the idea of a Hindu Chief Minister, naturally becomes all the more exciting for the ruling party. Anxieties in Kashmir stem from this obsession with reframing the state polity on communal terms, otherwise the last delimitation exercise was also done during Governor’s rule in 1995 and there was no such resistance to it.

It is a fact that since 1965, when the Prime Minister of J&K was re-designated as Chief Minister, the top post has always been held by a Muslim. In more recent times, since the 1996 elections, Ghulam Nabi Azad was the only Chief Minister from Chenab Valley region of Jammu Province and the remaining five Chief Ministers during this period were all Kashmiri Muslims. With 54.9 per cent population, Kashmir Province has 46 seats in the 87-member Assembly, Jammu has 37 seats for 42.9 per cent population and Ladakh has four seats for 2.2 per cent population. The default electoral arithmetic in the State has been such that a Hindu Chief Minister could never become a reality till now, but not that there was ever an occasion that J&K could have got a Hindu Chief Minister but the opportunity was denied. Religion has never come in the way of the individual’s Constitutional right to hold highest public offices in the State.

The Kashmir-based political parties have resented the idea of early delimitation because it would amount to undermining the State legislature that has frozen the process of delimitation till 2026-2031 by amending the J&K Representation of Peoples Act and Section 47(3) of the Constitution of Jammu and Kashmir. All that we are saying is that a popular government is not in place at the moment and the Governor as an agent of the Centre cannot initiate legislation on critical Constitutional matters of the State.

This amendment in 2002 was done to bring the State on par with rest of the country where the delimitation was frozen for the same period. Therefore, the freeze is not about denial of political aspirations of the Hindu community or regional aspirations of the Jammu province. In fact when the amendment was passed, the House had significant representation from Jammu and Ladakh regions and there was complete consensus on the need to put a lid on the matter for the time being. 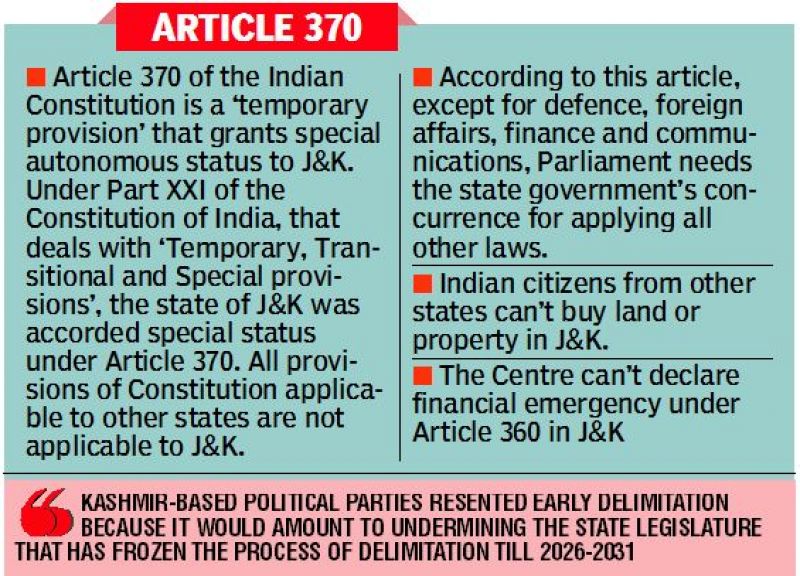 The point is that if a growing population necessitates the redrawing of Assembly constituencies let it be done at its right time by establishing a Delimitation Commission after following the due process of law. Similar is the case with reservation of SC constituencies. The process has to be fair and transparent and guided by Constitutional principles.

Clearly, any proposal of redrawing of Assembly constituencies at a time when elections are due looks like an attempt at gerrymandering. It is a fraud being committed on the people of J&K, more so the people of Kashmir by snatching their critical stake-holding from the politics of the State.

There is a serious concern in Kashmir that the Muslim-majority character of the state polity is being manipulatively eliminated to conclude the process of disempowerment of the Kashmiri people. Because there is a majoritarian government at the Centre that has won a landslide mandate from the people of India, the apprehension is that the special Constitutional privileges of the State legislature as protected by the Article 370 of the Indian Constitution might be tampered with, further fuelling tensions in an already volatile state.

BJP ran its entire election campaign around the need to abrogate Articles 370 and 35A of the Constitution and end the special status of the State so it’s hard to rule out misadventures that BJP might undertake as part of its celebratory hangover. The party could deploy absolutely illegal methods and subvert the Constitution to tick the boxes in its election manifesto in order to placate the larger national audience and impose a sense of defeat on Kashmiris. All regional political parties in J&K are awake to such a possibility.

The challenge for electoral mainstream in Kashmir therefore is how to democratically and non-violently counter a legislative assault on the special status of the state when the political activity in the State is abysmally low. In recent years the electoral mainstream has suffered a serious legitimacy crisis in the state and the participation of people in the electoral process has been on a constant decline. The near-total boycott situation in south Kashmir during the recent Parliament elections has become a major source of worry because it gives a huge space for manipulation to BJP and its allies in the state. A major policy shift in the Centre’s approach to Kashmir seen in recent times has been how the ruling party in New Delhi perceives electoral mainstream in Kashmir. Traditional sensitivities with regard to Kashmir are now a thing of past. There used to be a huge focus on enhanced electoral participation and the spectacle of polling in insurgency-ridden pockets of Kashmir Valley used to be celebrated. But the party interest has now overtaken the national interest.

BJP has realised in the recently concluded election campaign that Kashmir cannot only be used to win elections in rest of the country but it is possible for BJP to make inroads into Kashmir itself and win seats there. A pariah that it was, the PDP-BJP coalition gave BJP an opportunity to get introduced into the Valley and lay down the necessary ground network. The confidence that BJP has got now after having experienced power in the state has emboldened them to go a few steps further and attempt the Sangh agenda of having a Hindu CM. This they know can’t be done if the voter turnout is high. The boycott therefore offers an immense opportunity for electoral manipulation in Kashmir. This shift of state policy from focus on increased voter turnout to focus on boycott is something that Kashmiris are yet to grasp fully.  But it is heartening to see that a section of society in Kashmir is gradually waking up to dangers of abandoning the electoral space. My extensive interactions with Kashmiri youth tell me that it might not be easy for the rightwing party and its proxies to get significant electoral success in Kashmir in the near future as conversations around the existential threat to Kashmiris are getting louder. Upcoming Assembly elections are extremely crucial. Even rumours about trifurcation of the state, forced delimitation and abrogation of the articles related to special status are going to massively polarise the discourse. If Kashmiris decide to vote this time, which appears likely, then BJP will have to brace itself for a surprise. As of now the assurance from the Governor and the statement by the Home Ministry that no delimitation proposal was under discussion at the moment have given some hope to people of Kashmir. It is expected that rather than acting as an instigator, the Centre will allow tempers to calm down in Kashmir. The state has bled a lot in last few years and it is the time that old conversations about engagement and peace pick up again and the developmental activity resumes. That is what would be the best version of ‘Modi hai to mumkin hai’ for the people of Kashmir.

(The author, the first Kashmiri to top the Indian Civil Services examination, quit over killings in Kashmir and formed the Jammu and Kashmir People's Movement in March 2019. He is a medical graduate. In 2018, he was a recipient of the Fulbright-Nehru Master's Fellowship at Harvard Kennedy School)