In Tamil Nadu, cinema itself is revered as a religion, theatre as a temple and the star as the presiding deity. 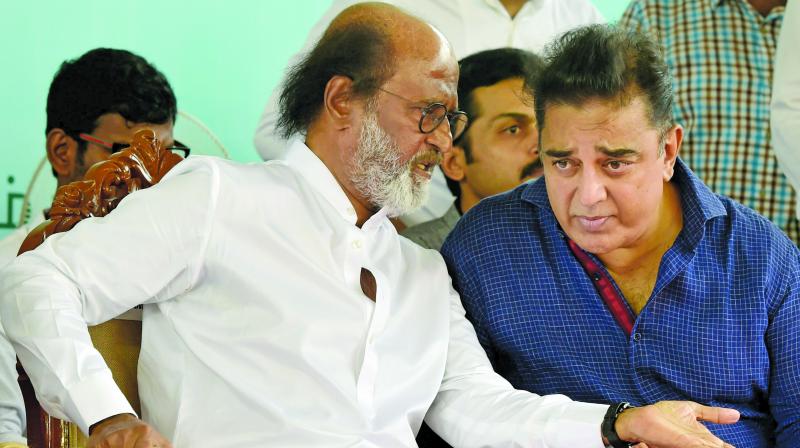 In Tamil Nadu, cinema is revered as a religion, theatre as a temple and the star as the presiding deity. Nowhere in the world do cinema personalities exert as much power as they do in politics in Tamil Nadu, home to the rationalist Dravidian movement and a state that boasts of sowing the seeds of the Information Technology revolution in India. Cinema stars may become great political leaders and chief ministers but they do not necessarily make good administrators. This has been Tamil Nadu’s experience in seeing the dark side of Matinee netas.

Tamils have always been captivated by art since the inception of the race several centuries ago. Performing culture has had its share of importance in Tamil history and artists have always been held in awe by their audience in this part of the word since time immemorial, but these entertainers could never influence the decision makers and remained largely apolitical.

Everything turned topsy-turvy when poets who sang in praise of God entered the arena and they not just held the kings captive to their word play, but also deeply influenced their politics, policies and hence became an integral part of their administration.

When the rulers actively encouraged the “bhakti poets”, performance, religion and politics became inseparable in what is now known as Tamil Nadu. And the influence that the performers wield among the people continues even now, in 2018, with cinema and politics being two sides of the same coin.

In Tamil Nadu, cinema itself is revered as a religion, theatre as a temple and the star as the presiding deity. Nowhere in the world do cinema personalities exert as much power as they do in politics in Tamil Nadu, home to the rationalist Dravidian movement and a state that boasts of sowing the seeds for Information Technology revolution in India.

And film personalities catapult themselves to the status of Gods actively encouraging cult worship that even leads to violence at times. The religion of Tamil cinema began manufacturing new Gods – prominent among whom were M G Ramachandran and S S Rajendran – who not just encouraged hero worship but also used the powerful silver screen as a medium to propagate their political ideology.

The Dravida Munnetra Kazhagam, better known by its acronym DMK, put cinema to its optimum use by carpet bombing the industry with its ideologues and supporters – who carried the propaganda on the screen.

Cinema played a major part in DMK’s ascension to the Fort. St. George, the seat of the Tamil Nadu Government, with the powerful pen and tongue of its most-popular script writer M Karunanidhi turning the game in its favour.

The real cult worship in Tamil Nadu began only after the DMK came to power and MGR’s emergence as the king-maker after he put his weight behind his friend Karunanidhi to take over the mantle from C N Annadurai after his death in 1969.

MGR, the matinee idol who swayed millions through his acting skills and often sentimental dialogues which projected him as saviour of downtrodden women, could stay in power till he breathed his last and his successor J Jayalalithaa also had a shot at power – not just once, but for four terms. And now, after Jayalalithaa, her colleagues from the powerful industry that has dictated politics in the state for five decades now – Rajinikanth and Kamal Haasan – have also thrown their hats in the ring. Kamal and Rajini can make no difference to Tamil Nadu politics that has inculcated the slave mentality among the people.

They promise a better Tamil Nadu now, but the pertinent question that should be asked is what were their contributions to nation building while they were in cinema for nearly four decades?  It is natural to anyone to have political ambitions, but one should not think that mere star power would help them at the hustings.

Heroes and heroines who capture power work overtime to convert their voters into mere fans, while sitting in their ivory towers. Their agenda has always been to reduce the people into passive participants in democracy and ensure that they lose their self-respect and remain captive only to their charisma.

These cinema super stars merely act as promoters of neo-liberal economic policies and ensure that people remain mesmerised by their charm and refrain from questioning them or their policies and ideologies, that if if they really have any.

MGR and Jayalalithaa spoke of human rights and stood for the poor in their films, but they ruled the state with an iron fist and created the ignominy of violently crushing people’s movements. Administrations run by MGR and Jayalalithaa never had any semblance of democracy and their tenures will also be remembered as the most “repressive period” in the history of Tamil Nadu.

Only during their tenures, the “black laws” – POTA, TADA, Goondas Act and NSA – were blatantly misused to quell dissent and to settle scores with political opponents. The semi-dictatorship, introduced by MGR and actively patronised by Jayalalithaa, led to over centralisation of power and rampant corruption in all sectors of the government.

MGR and Jayalalithaa might have been good leaders, but they were never daunting administrators. They only allowed hypocrisy and nepotism to mushroom during their regimes – most of the engineering colleges in Tamil Nadu are owned by politicians and MGR had a major role in promoting his former henchmen to transform themselves into educationists.

That corruption is deeply entrenched in their politics will be on display every time Tamil Nadu goes to vote.

The film stars, who later donned the hat of politicians, were highly successful in determining a price tag for everyone – separate price tags for voters, bureaucrats, industrialists and they are even successful in corrupting constitutional bodies.

“Cash for Votes” is a way of life in Tamil Nadu and people’s minds have been besmirched so much that even if all political parties in the state decide not to bribe for votes, the voters wouldn’t accept it.

People openly ask for money from candidates during elections and money distributions on the eve of polling is a ritual in its own way. The Dravidian politicians, most of whom had their grooming in tinsel town, have mocked the electoral system of India by reducing it to a laughing stock.

Actors can only encourage herd mentality among people; they can never transform the society. It is better they leave the job of nation building to committed politicians.

(The writer is the general secretary of Viduthalai Chiruthaigal Katchi (VCK) and anti-caste activist.)