India   All India  11 Apr 2018  My husband has isolated himself in room: Wife of BJP MLA accused in Unnao rape
India, All India

My husband has isolated himself in room: Wife of BJP MLA accused in Unnao rape 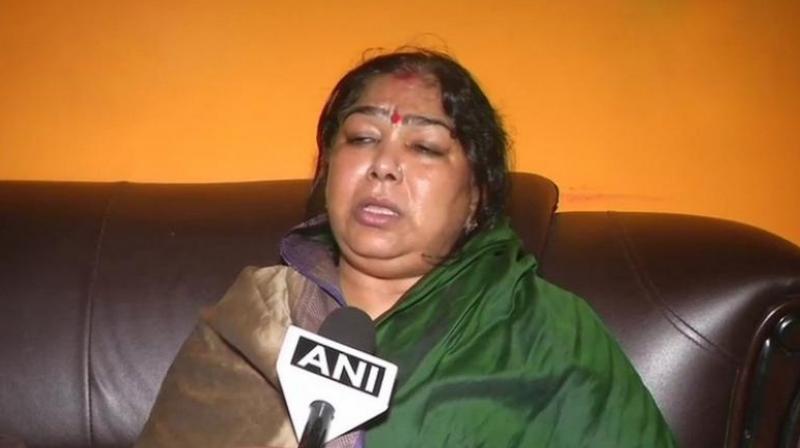 Sangeeta Sengar said 'He (Kuldeep Singh Sengar) has isolated himself in his room and is feeling helpless.' (Photo: ANI | Twitter)

Lucknow: Two days after the father of an 18-year-old woman from Uttar Pradesh, who alleged rape by a BJP MLA, died in police custody, and her family was reportedly confined to a hotel in Unnao by the police, the wife of accused lawmaker Kuldeep Singh Sengar met a top police officer in Lucknow to demand "justice for her husband".

During her meeting with Director General of Police (DGP) OP Singh, MLA’s wife Sangeeta Sengar complained that the media had already declared her husband guilty of rape.

“He has isolated himself in his room and is feeling helpless. We want the truth to come out. Just by using words like 'balatkaari' (rapist), nothing will be proved,” Sengar’s wife said.

The MLA's wife told ANI, "There is a political motive behind this. Make my husband and girl (rape victim) undergo Narco Analysis Test. My daughters are being traumatised. We are being mentally harassed. No evidence has been presented yet. Until and unless it has been proven, my husband cannot be labelled as a rapist."

The 18-year-old woman has accused BJP MLA Kuldeep Singh Sengar and his brother Jaideep Sengar, also known as Atul, of raping her in June last year.

The victim family's numerous attempts to file an FIR (First Information Report) against them were thwarted by the police. They were even threatened and shooed away. But the family didn't give up.

Last week, an angered Kuldeep Singh Sengar allegedly let his brother brutally thrash her 55-year-old father. Their struggle to file a complaint against Atul and his men for the assault, however, led to a counter-complaint by his daughter's alleged rapists.

The injured man was arrested and put in jail. He wasn't taken to the hospital till he vomited and complained of abdominal pain. He died of septic shock at the hospital on Monday, his postmortem report revealed among other gut-wrenching details.

Atul was arrested a day later on charges of leading an assault on the man. A Special Investigation Team (SIT) has also been formed to question his brother.

"The allegations against Atul Sengar about murder are totally false. It is that man (the girl's father) who came to our house and abused us. He had a big criminal record," NDTV reported Sangeeta Sengar saying.

The rape victim had tried to kill herself right outside Uttar Pradesh Chief Minister Yogi Adityanath's home on Sunday. The same day, her family had sent a handwritten letter to the chief minister's office. The subsequent FIR named all the attackers, but omitted the MLA's brother.

Kuldeep Singh Sengar has dismissed all allegations and said "these low level people are trying to frame me".

Also Read: They are from low class, trying to malign me: UP BJP MLA on rape allegation