London Mayor Sadiq Khan in an interview reiterated his view that the invitation to Donald Trump was 'premature'. 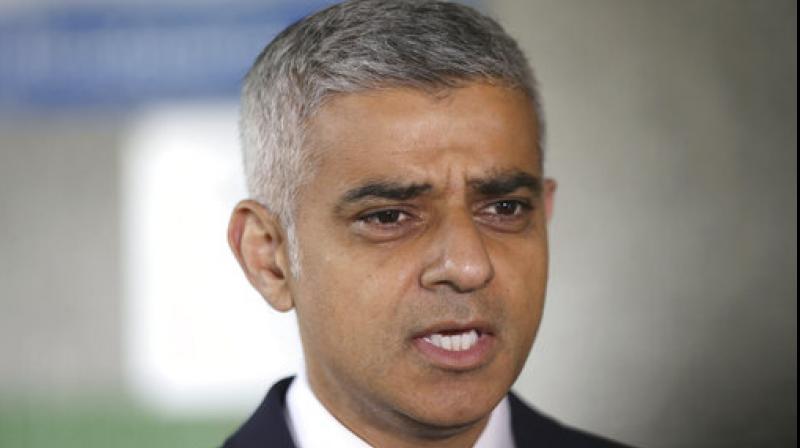 Mayor of London Sadiq Khan speaks to the media as he joined London Ambulance workers in observing a minute's silence at the London Ambulance Service headquarters at Waterloo, central London, in honour of the London Bridge terror attack victims. (Photo: AP)

London: The British government on Tuesday stood by an invitation for US President Donald Trump to make a state visit to the UK as London Mayor Sadiq Khan under attack from the White House said the offer should be scrapped.

"The invitation has been issued and accepted and I see no reason to change that," Foreign Minister Boris Johnson told BBC radio. Prime Minister Theresa May, asked by The Sun newspaper whether the controversial trip would go ahead, answered "Yes."  But Khan, in an interview with AFP, reiterated his view that the invitation was "premature". "State visits are given to world leaders who have had distinguished service, who have a track record," he said.

"In the circumstances where Donald Trump as president had a Muslim ban, had changed the policies of the USA, the longstanding policies around refugees, in the circumstances where many British people disagree with many of Donald Trump's policies, we shouldn't be having a state visit," he said. Khan said the United States and Britain were "close allies" and they should continue to work closely together.

"But one of the things about a special relationship, it's like having a best friend you stand shoulder-to-shoulder with them in times of adversity but you call them out when they're wrong, and you tell them when they are wrong. And I think on many, many things, Donald Trump is wrong," he said.

May made the invitation to Trump just seven days after he took office, a decision that prompted accusations that Britain, its global influence set to be weakened by Brexit, was kowtowing to the new US leader.

By contrast, May's predecessor David Cameron gave the invitation to the president Barack Obama more than a year into his administration.

More than 1.8 million people have signed an online petition saying Trump should not make the state visit as it "could cause embarrassment" to the monarch. In other comments, May and Johnson both defended Khan for his reassurances to Londoners after the attacks.

Trump, in a series of tweets, lashed Khan's handling of the Saturday night terror attack, mocking the mayor for telling the public there was "no reason to be alarmed" over armed police on the streets.

The US president then dismissed criticism that he had taken Khan's remarks out of context, accusing Khan of coming up with a "pathetic excuse" to defend himself. "I think Donald Trump is wrong in what he said about Sadiq Khan in the aftermath of the London Bridge attack," May said at a press conference on the campaign trail ahead of Thursday's election.

Johnson said separately "He is entirely right to say what he said to reassure people of his city about the presence of armed officers on the streets."