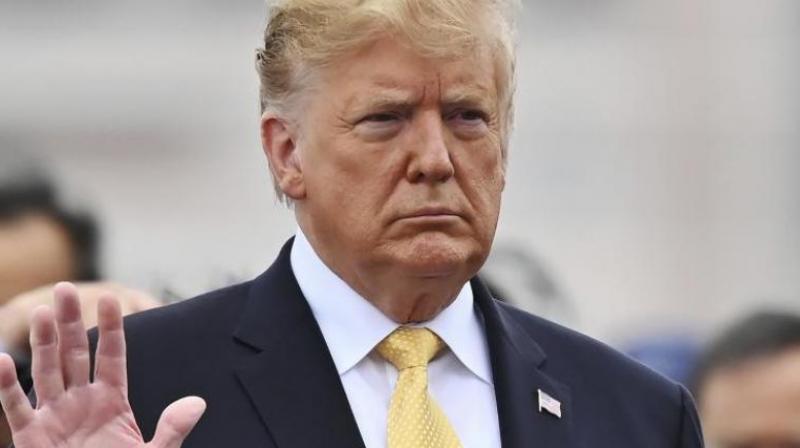 Beset by tensions at home and abroad, Trump sparked yet more controversy with his use of the racially charged word 'lynching' to describe his predicament. (Photo: File)

Beset by tensions at home and abroad, Trump sparked yet more controversy with his use of the racially charged word "lynching" to describe his predicament.

His impeachment looked ever more likely after the Democratic-led lower house of Congress questioned the acting US ambassador to Ukraine, Bill Taylor.

Taylor is seen as a crucial witness in the case against Trump, who is accused of abusing his power to push Ukraine to investigate one of his main 2020 election rivals, Democrat Joe Biden.

The hearing was behind closed doors, but according to The Washington Post and CNN, Taylor used opening remarks to confirm that the White House repeatedly sought to pressure Ukraine -- and said it would not deliver US military assistance without results.

Taylor said he was told Trump wanted Ukrainian President Volodymyr Zelensky "to state publicly" that he would investigate, according to his leaked opening statement.

Read | A whistleblower, a transcript... the many players in Trump's impeachment drama

He said that the US ambassador to the European Union, Gordon Sondland, told him that "'everything' was dependent on such an announcement, including security assistance."

Emerging from the testimony, Democratic congressman Adriano Espaillat tweeted that "what I heard today from #BillTaylor was very troubling and explosive."

"At some point we're going to have to conclude our investigation and go forward with what we have, and what we have is incredibly damning right now," another Democratic legislator, Ted Lieu, said.

A new CNN/SSRS poll on Tuesday showed support for Trump's removal from office is now 50 percent to 43 against.

However, reflecting the intensely partisan divide among voters, 87 percent of Democrats are pro-impeachment, compared to just six percent of Republicans.

Trump admits to asking Ukraine's government to probe what he says is corruption by Biden in the ex-Soviet republic.

However, he denies Democrats' allegation that he tried to strongarm the Ukrainians by linking the delivery of US military aid to his request for an investigation into Biden.

Trump has already branded the impeachment proceedings a "coup," a "hoax," a "witch hunt," and a variety of swear words.

On Tuesday, he prompted an uproar by claiming he was the victim of a lynching, a word linked in the United States to the darkest days of slavery and its long aftermath.

"All Republicans must remember what they are witnessing here -- a lynching," Trump tweeted.

More than 3,400 African Americans were lynched between 1882 and 1968, and congressional Democrats reacted with collective anger.

"How dare you?!" seethed congresswoman Barbara Lee on Twitter as she assailed the "disgusting and ignorant message" from Trump.

The White House fought back, with spokesman Hogan Gidley insisting that Trump did not mean to compare "what's happened to him to one of the country's darkest moments."

There was rare criticism from the top Republican legislator, Senator Mitch McConnell, who said Trump had made "an unfortunate choice of words."

He added, however, that Trump does have a "legitimate complaint" over a "totally unfair process."

Trump will rely on McConnell to deliver an acquittal in the Senate if the lower house does go ahead with an impeachment vote.

Another important Republican senator, Lindsey Graham, said Trump's comparison was in fact correct: "This is a lynching in every sense."

Trump did urge Zelensky in July to investigate Biden and his son, according to a summary of a phone call released by the White House.

Seeking help from a foreign country in a domestic election is illegal in itself, but a whistleblower complaint about the call made the more serious allegation that Trump also sought to condition nearly USD 400 million in military aid to Ukraine on Kiev launching a probe.

Taylor is a military veteran and career diplomat who served as US ambassador to Ukraine from 2006 to 2009, and is now charge d'affaires following the ouster of ambassador Marie Yovanovich this year.

Yovanovich testified to Congress two weeks ago, telling House investigators she was pushed out on "false claims" that she had disparaged Trump.

Taylor has already damaged Trump's defence with a paper trail that includes text messages in which he expresses alarm about having to pressure Zelensky's government.

He, Sondland and other top US diplomats discussed leveraging a potential summit between Trump and Zelensky on a pledge to mount investigations harmful to the Democrats.

"Are we now saying that security assistance and WH (White House) meeting are conditioned on investigations?" Taylor asked Sondland in a September text message.

Later, Taylor expressed more explicit reservations to Sondland: "I think it's crazy to withhold security assistance for help with a political campaign."