Here are the key players of the Donald Trump-Ukraine controversy

This controversy has triggered the commencement of the formal process of impeachment inquiries against Trump on September 24, 2019. 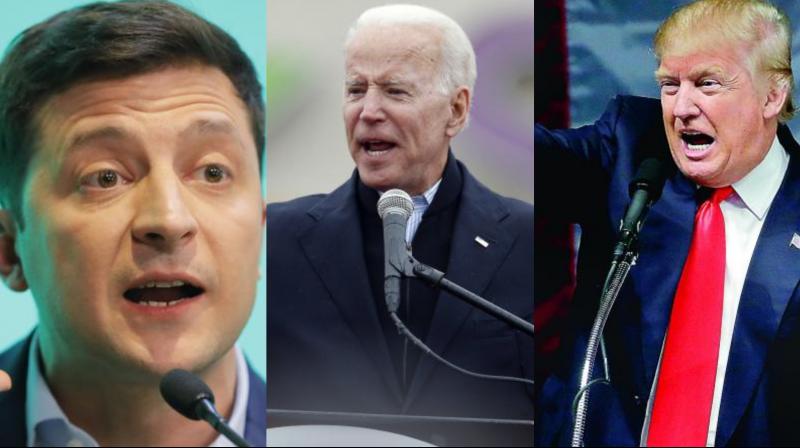 Washington: Since May 2019, US President Donald Trump and his attorney Rudy Giuliani has repeatedly pressed the Ukraine government to investigate business dealings of Joe Biden, a Democratic candidate for the 2020 US presidential election, and his son Hunter Biden.

A whistleblower complaint filed by a CIA officer asserted that "the US President is using the power of his office to solicit interference from a foreign country in the 2020 elections". As per the complaint, Trump made the phone call on July 25, 2019, to try to pressurise Ukraine president Volodymyr Zelensky.

After the conversation, senior White House officials tried to 'lockdown' the complete official transcript of the call.

This controversy has triggered the commencement of the formal process of impeachment inquiries against Trump on September 24, 2019, with the Speaker Nancy Pelosi directing a go-ahead for the process.

Here are the key players of this controversy:

Donald Trump (President of the United States): The Democrats announced an official impeachment enquiry into Trump this week after whistleblower's complaint about his conversation with the Ukraine president.

A White House summary of July 25 telephonic conversation showed Trump pressed Zelensky to work with Rudy Giuliani to investigate his rival Joe Biden for 2020 US election.

In the July 25 phone call, the Ukrainian President mentioned plans to buy US-made Javelin missiles -- which he needs to help guard against potential Russian provocations. At the very same time, Trump was sitting on nearly USD 400 million in aid to Ukraine, which he has argued was on hold while he leaned on European countries to give more to Ukraine.

Volodymyr Zelensky (President of Ukraine): Ukraine’s new president was a wildcard candidate who had no experience of politics and played the role of the president in a television comedy. In a remarkable plot twist, he’s now been thrust into the centre of an American political scandal.

His country is in the midst of a years-long standoff with Russia over Crimea, an area Russia invaded and annexed in 2014.

He flattered Trump during their phone call in July and promised a fair look at the Biden family after Trump asked for an investigation. However, Zelensky does not want to get involved in US politics after the White House released the transcript of the conversation.

Joe Biden (Donald Trump's main political rival): The current frontrunner in the race for the Democratic presidential nomination was the vice-president in 2016 when the Obama administration pressured Ukraine to remove Viktor Shokin, the country’s top prosecutor.

Hunter Biden (Son of Joe Biden): Joe Biden’s second son served on the board of Burisma Holdings, a Ukrainian gas producer, from 2014 to 2019. Burisma had been investigated by Shokin for alleged corruption, but the investigation was dropped by the time the US government urged Ukraine to fire Shokin.

Biden, who handled Ukraine issues for the Obama administration, had put public and private pressure on the Ukraine government to fire Shokin.

The Obama administration threatened to withhold USD 1 billion in loan guarantees unless Poroshenko took action. Trump has seized on this to accuse Biden of wrongdoing -- despite no evidence of this -- and the international calls for Shokin's firing at the time. The Ukraine legislature voted to oust Shokin in March 2016.

He has said he went to Ukraine because was trying to undermine the beginnings of the Russia investigation and protect Trump's former campaign chairman Paul Manafort, who is currently in prison for tax fraud linked to his business dealings in Ukraine.

Giuliani has said he then pivoted after learning about claims concerning Joe Biden's actions as Vice President, including his public calls in 2016 for a prosecutor in Ukraine to be fired.

Giuliani claims that was improper because, at the time, Biden's son sat on the board of a Ukrainian company that had once been under investigation in Ukraine.

The Whistleblower: Little is known about the identity of the person who ignited the firestorm engulfing Trump.

An anonymous government worker - with access to White House officials - who filed an official complaint against the President claiming that multiple officials had concerns that Trump was using his public office to seek personal political gain from a foreign power.

The complaint also alleged a coverup by White House staffers who sought to bury Trump's conversation with the Ukrainian President by placing a rough transcript of it in a computer system reserved for highly classified material.

Michael Atkinson (Inspector General of the Intelligence Community): The whistleblower complaint was originally delivered to Michael Atkinson. After receiving the complaint, Atkinson, the inspector general for the intelligence community, recommended it be shared with Congress. This put Atkinson at odds with his superior, Maguire, who blocked it from being shared. While the complaint was being withheld, Atkinson alerted lawmakers to its existence, saying it raised issues of “urgent concern”.

Nancy Pelosi (Speaker of the US House): The speaker of the House, and the most powerful woman in Congress, Pelosi decided to initiate an impeachment inquiry after the rough transcript of the Trump-Zelenskiy call was published on Wednesday.

Joseph Maguire (Acting Director of National Intelligence): He is a retired vice admiral and former Navy SEAL and became the acting director of national intelligence on August 16, 2019. He has been criticised for not sharing the complaint with Congress --- as is normal procedure. Maguire said he thought issues raised in the complaint might be covered by executive privileges and later consulted officials at the justice department and White House over the complaint.

Weeks into the job, he's already been called to testify before Congress over the Ukraine scandal. In that congressional testimony, he defended the whistleblower for coming forward.

William 'Bill' Barr (US Attorney General): The attorney general is named by Trump in the call with Zelenskiy, the president saying Zelenskiy should work with Barr – and Giuliani – to investigate Joe and Hunter Biden. The Department of Justice, which Barr oversees, said Trump had not asked Barr to work with Ukraine.

Barr took over as head of the Department of Justice in February 2019 and oversaw the official release of the Mueller report summing up the government's investigation into claims that Russia engaged with the Trump campaign to tamper with the 2016 election.