World   Americas  18 Oct 2017  With spike in hate crimes in US, Indian-Americans fear for their lives
World, Americas

With spike in hate crimes in US, Indian-Americans fear for their lives

Almost ten months into the Trump presidency, Indians might be changing their minds, as many fear for their lives. 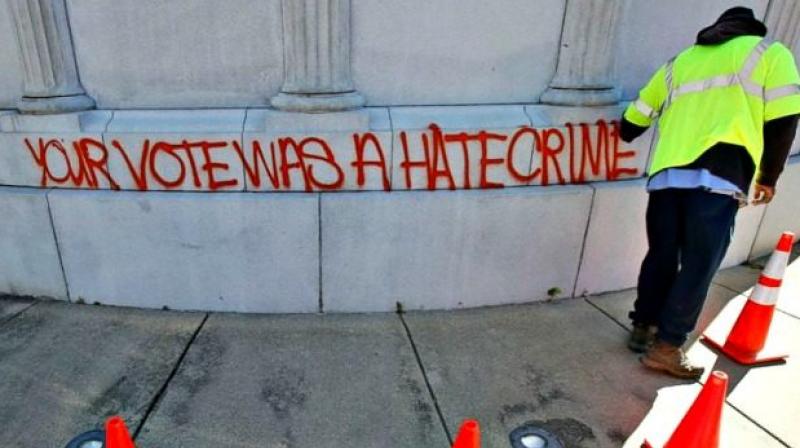 'I have become acutely aware of my skin colour in the last few months, after the rise of alleged hate crimes against Indians and Indians mistaken for ‘Arabs,’ said Sushovan Sircar. (Representational Image | Photo: AP)

New York: Even as Hindu nationalists piqued with joy in the moments after Donald Trump came to power; and as the Oval Office lit up on Wednesday from Trump’s Diwali celebrations, Indians in America by and large continue to live in fear.

Trump’s ‘America First’ policy has had more repercussions than imagined, as the outrage against immigrants spins speedily out of control. Hate crimes are on a steady rise as the wave of racist violence consumes migrants indiscriminately.

According to reports, Purinton allegedly had mistaken the victims to be ‘Middle Eastern men.’

On March 2, 2017, a 64-year-old Florida resident was arrested for trying to set a convenience store on fire because he believed its owners, who are of Indian descent, were Muslims.

Two days later, on March 4, Deep Rai, a 39-year-old Sikh, was shot outside his home in Kent, Washington, by a masked gunman, who allegedly shouted at him to "go back to his own country.”

Though violence and hateful rhetoric has escalated since Trump’s inauguration, many Indians – in America and abroad – have made the mistake of interpreting his calls to clamp down on Muslim migrants as support for the Hindu-majority country.

For many Indians, the primary concern was a possible restriction on work visas while they remained blissfully ignorant of the threat their skin posed, Quartz reported.

However, almost ten months into the Trump presidency, Indians might be changing their minds, as many fear for their lives.

The fear rising among Indian immigrants is imminent.

“I have become acutely aware of my skin colour in the last few months, after the rise of alleged hate crimes against Indians and Indians mistaken for ‘Arabs,’ Sushovan Sircar told HT.

Sircar, who is a student of cyber security policy at Georgetown University in Washington DC, added, “The last two months have seen three violent attacks against people of Indian origin in Kansas city, Kent and South Carolina, which resulted in two deaths. I didn’t want to stand out any more than I already do, and my family back home has been worried too. So I shaved off my beard, and the absurdity of this fear is saddening”.

Read: Indian killed in Kansas: US assures justice, says it's 'a nation of immigrants'

Another Indian living in US, Shourjya Deb, 27, a student of public policy and administration at Rutgers University in New Jersey said: “In the university space, the way of life is such that people are kind of afraid of being called out as racists or fascists. But even here, when I ask Republicans if they want me to leave the country, they are embarrassed and don’t know how to handle the question.”

Indians make up for a little more than one percent of American population with about 3.2 million people of Indian descent living there, a Pew Research Centre report found.

Whereas, according to a report in the New York Times, the number of applications for H-1B visas also fell to 199,000, a nearly 20 percent decline, according to data kept by United States Citizenship and Immigration Services.

The lure of the ‘American dream’ seems to be waning, its shine dampened each day, under Trump Administration, as white supremacists misread and learn to make ‘America Hate Again.’