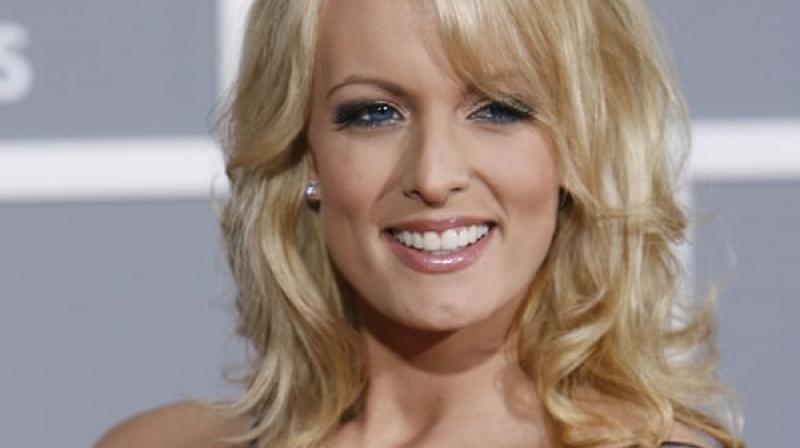 Since the alleged signing of a confidentiality agreement, Daniels has denied the affair took place and then appeared to deny making the denial. (Photo: AP)

After Trump's long-time personal lawyer admitted paying USD 130,000 to Stormy Daniels shortly before the 2016 election, the actress's manager suggested a non-disclosure agreement had been broken.

"Everything is off now, and Stormy is going to tell her story," manager Gina Rodriguez told US media.

Trump's aide and special counsel Michael Cohen has refused to say why he paid Daniels the vast sum but was not, as he claims, reimbursed by the "Trump Organization nor the Trump campaign."

Trump declined to comment on the issue. The White House has dodged questions about whether allegations of an affair are true, claiming the matter was dealt with during the campaign.

It has also referred any questions about the payment to Cohen.

Vice President Mike Pence described suggestions of an affair as "the latest baseless allegations against the president."

In January, celebrity magazine In Touch published a 2011 interview with Daniels -- whose real name is Stephanie Clifford -- in which she details having "textbook generic" sex with Trump.

She recalled meeting Trump at a celebrity golf tournament in 2006, shortly after the president's wife Melania Trump gave birth to their son Barron.

Since the alleged signing of a confidentiality agreement, Daniels has denied the affair took place and then appeared to deny making the denial.

The allegations bubbled away before the election but have resurfaced because of a legal case that claims Cohen's payment may have broken campaign finance laws.

The lawyer said he did nothing wrong.

"The payment to Ms Clifford was lawful, and was not a campaign contribution or a campaign expenditure by anyone," Cohen said.

He declined to say whether Trump was aware of the payment.

Watchdog group Common Cause launched the legal action, saying they have "reason to believe" that money was "an unreported in-kind expenditure... because the funds were paid for the purpose of influencing the 2016 presidential general."

The alleged violation of federal campaign finance law "undermines the integrity of democracy in the United States," a letter signed by Paul Ryan of Common Cause reads.

Daniels has been taking advantage of her newfound notoriety.

In a recent appearance on the late night TV talk show "Jimmy Kimmel Live" -- right after Trump delivered his State of the Union address -- Daniels deflected questions about the alleged affair and whether she had signed a non-disclosure agreement.

"You're so smart, Jimmy," Daniels answered.

Later in the interview, Kimmel asked, "Have you ever made love to someone whose name rhymes with Lonald Lump?"

"I'll call you whatever you want me to call you, baby," Daniels responded.