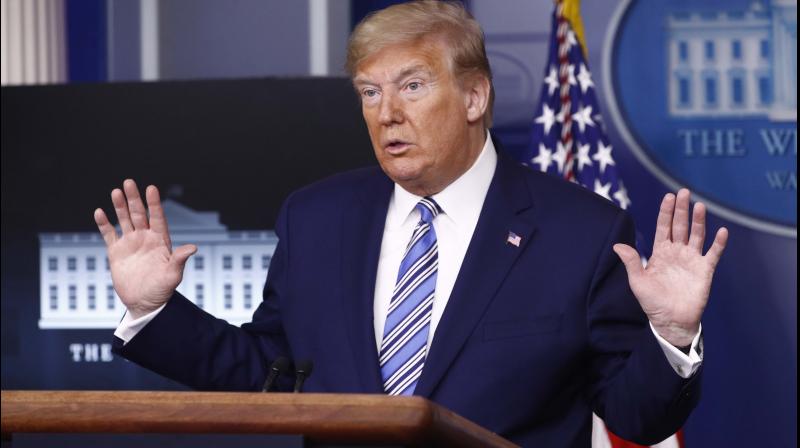 Washington: US President Donald Trump was abruptly escorted by a US Secret Service agent out of a live press briefing on coronavirus as a precautionary measure, after a shooting incident outside the White House.

Following the incident on Monday, Trump minutes later returned for the news conference and said things were under control.

"White House seems to be very well under control. I would like to thank the Secret Service for doing their always quick and very effective work but there was an actual shooting and somebody has been taken to the hospital, Trump told reporters as he resumed the press briefing.

"I don't know the condition of the person. It seems that the person was shot by Secret Service. So we will see what happens," Trump said.

The incident happened soon after Trump started speaking inside the James Brady press briefing room of the White House.

As he was making his opening statement and talking about NASDAQ and economy, a top secret service agent reached out to him and requested him to leave the briefing room.

The secret service was seen saying something into his ears, after which the President, calm and composed, walked out of the briefing room.

Trump later told the reporters that he was taken to the Oval Office.

"We were taken just out over to the Oval Office," he said.

Treasury Secretary Steven Mnuchin was also in the briefing room.

Amidst confusion as Trump left the briefing room for several minutes, the Secret Service in a tweet confirmed the incident, saying "There has been an officer involved shooting at 17th Street and Pennsylvania Ave. Law enforcement officials are on the scene".

"The investigation into a USSS officer involved shooting is ongoing. A male subject and a USSS officer were both transported to a local hospital. At no time during this incident was the White House complex breached or were any protectees in danger, the Secret Service said in another tweet an hour later.

Trump told reporters that the incident happened outside the White House complex.

"It was outside of the White House in this area right over here and they will have details for you in a little while. Somebody is taken to the hospital. It seems that the shooting was done by the law enforcement at that person, at the suspect, he said.

It was the suspect who was shot and this just took place. A couple of people outside I noticed a man named John Roberts who you know very well he reported that he heard shots. He was outside and he heard two shots, he added.

Responding to a question, Trump said that he was not rattled.

Trump said that he feels very safe with Secret Service.

"They are fantastic people. They are the best of the best, and they are highly trained. I don't know if anybody got to walk outside, but there were a lot of terrific looking people ready to go if something was necessary. People at the highest level of law enforcement there's nobody like these people, so they just wanted me to step aside for a little while just to make sure that everything was cleared outside because it was right in this area, he said.

"I didn't even think about not coming back (for the news conference). I said am I able to go back and they said you have to wait a little while. I waited a little while as you know in the Oval Office area and I said, can I get back now and they said yes, and they have a lot of fortification outside just in case, but it was one person, he said.