World   Americas  10 Dec 2018  Pak continues to harbour terrorists, US should not give it even one dollar: Haley
World, Americas

Pak continues to harbour terrorists, US should not give it even one dollar: Haley

Haley said US did not need to give money to countries that wish harm to US, go behind its back and try and 'stop us from doing things'. 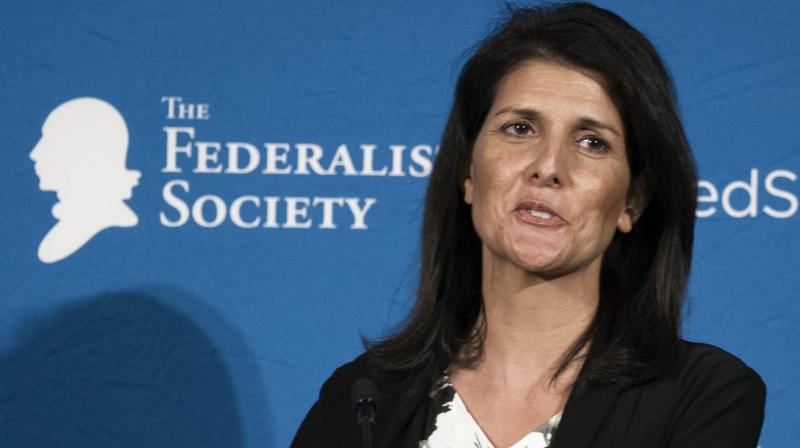 Haley will step down as the UN envoy at the end of this year. (Photo: File)

New York: Pakistan continues to harbour terrorists that turn around and kill American soldiers, US ambassador to the UN Nikki Haley has said, asserting that Washington should not give Islamabad even a dollar until it addresses the issue.

Haley, the first Indian-American ever appointed to a Cabinet position in any US presidential administration, said the US did not need to give money to countries that wish harm to America, go behind its back and try and "stop us from doing things".

"...I think there should be a strategic view on which countries we partner with, which ones we count on to work with us on certain things, and move forward accordingly. I think we just blindly allow money to keep going without thinking that this is real leverage. We have to use it," Haley told US magazine 'The Atlantic'.

"The one example I'll give you is, look at Pakistan. Giving them over a billion dollars, and they continue to harbour terrorists that turn around and kill our soldiers —that's never okay. We shouldn't even give them a dollar until they correct it. Use the billion dollars. That's not a small amount of change," she said. Haley will step down as the UN envoy at the end of this year. US President Donald Trump last week nominated chief State Department spokeswoman and a former Fox News journalist Heather Nauert as Haley's successor.

In October, Haley announced that she was leaving the post by the end of the year. The 46-year-old former South Carolina governor has served nearly two years in the post. She said Pakistan should be told "you have to do these things before we will even start to help you with your military or start to help you on counterterrorism".

Asked if she does not agree that foreign aid can turn an adversary into an ally, or can make a country more favourable than it would be otherwise, Haley said, "no, I think it absolutely can. I think that you do have to use it as leverage".

"I don't think you should blindly give it and then expect goodwill. You have to ask for goodwill and then give it when you see good things happen," she said.

Last month, Trump defended his administration's decision to stop hundreds of millions of dollars in military aid to Pakistan, saying Islamabad does not do "a damn thing" for the US and its government helped late al-Qaeda leader Osama bin Laden hide near its garrison city of Rawalpindi.

The US Naval Special Warfare Development Group forces, in a daring helicopter raid, killed Laden in 2011 and demolished the compound.

Trump began the new year by launching an attack on Islamabad in his first tweet of 2018, accusing it of "lies and deceit".

"The United States has foolishly given Pakistan more than 33 billion dollars in aid over the last 15 years, and they have given us nothing but lies and deceit, thinking of our leaders as fools," he wrote. "They give safe haven to the terrorists we hunt in Afghanistan, with little help. No more!" Trump added.