The documents reveal new aspects of the plan, including the proposed involvement of a Russian company to manufacture nuclear equipment. 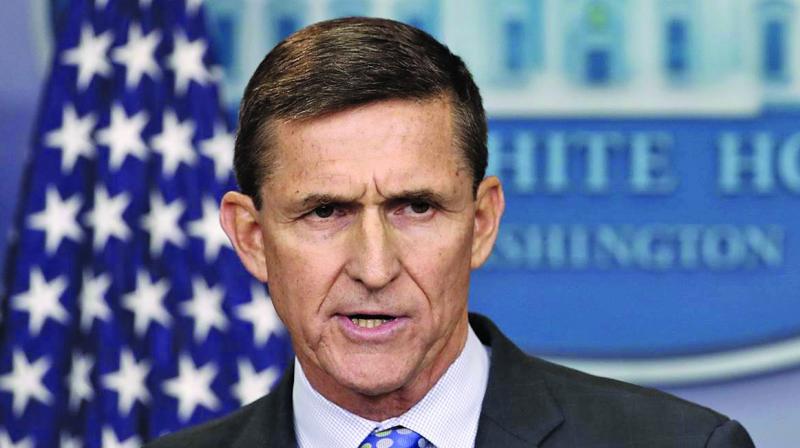 Mr Flynn pleaded guilty on Friday to lying to the FBI about a discussion with the former Russian ambassador to Washington, Sergey Kislyak, in late December 2016 regarding sanctions. (Photo: File)

Washington: Backers of a US-Russian plan to build nuclear reactors across the Middle East bragged after the US election they had backing from Donald Trump's national security adviser Michael Flynn for a project that required lifting sanctions on Russia, documents reviewed by Reuters show.

The documents, which have not previously been made public, reveal new aspects of the plan, including the proposed involvement of a Russian company currently under US sanctions to manufacture nuclear equipment. That company, major engineering and construction firm OMZ OAO, declined to comment.

The documents do not show whether Mr Flynn, a retired Army lieutenant general, took concrete steps to push the proposal with Mr Trump and his aides. But they do show that Washington-based nuclear power consultancy ACU Strategic Partners believed that both Mr Flynn, who had worked as an adviser to the firm as late as mid 2016, and Mr Trump were firmly in its corner.

"Donald Trump's election as president is a game changer because Trump's highest foreign policy priority is to stabilize US relations with Russia which are now at a historical low-point," ACU's managing director, Alex Copson, wrote in a November 16, 2016 email to potential business partners, eight days after the election.

White House officials did not immediately respond to an email seeking comment. ACU declined comment and also declined to make Mr Copson available for an interview. Previously they told a congressional committee that they had not had any dealings with Flynn since May 2016, before Mr Trump became the Republican Party's presidential candidate.

Mr Flynn's lawyer, Robert Kelner, did not respond to a request for comment.

Mr Flynn pleaded guilty on Friday to lying to the FBI about a discussion with the former Russian ambassador to Washington, Sergey Kislyak, in late December 2016 regarding sanctions.

The documents also show that ACU proposed ending Ukraine's opposition to lifting sanctions on Russia by giving a Ukrainian company a USD billion contract to provide turbine generators for reactors to be built in Saudi Arabia and other Mideast nations.

The contract to state-owned Turboatom, and loans to Ukraine from Gulf Arab states, would "require Ukraine to support lifting US and EU sanctions on Russia," Copson wrote in the November 16 email.

A Turboatom spokeswoman said she did not have an immediate comment on the matter.

The email was titled "TRUMP/PUTIN ME Marshall plan CONCEPT." ME stands for Middle East. The title, evoking the post-World War Two plan to rebuild Western European economies, reflected the hopes of the plan's backers that Mr Trump and Russian President Vladimir Putin could cooperate on a project that would boost Middle East economies.

The email can be seen here.

The ACU documents reviewed by Reuters include emails, business presentations and financial estimates and date from late autumn 2016.

As part of their investigation into the Trump election campaign's ties to Russia, Special Counsel Robert Mueller and Democrats on the House of Representatives' Oversight Committee are probing whether Mr Flynn promoted the Middle East nuclear power project as national security adviser in Mr Trump's White House.

Mr Flynn resigned after just 24 days as national security adviser after it became known he had lied to Vice President Mike Pence by telling him he had not discussed US sanctions on Russia with Kislyak in late December.

In response to questions about the emails and documents, ACU referred Reuters to letters written in June and September by ACU scientist Thomas Cochran to the House Oversight Committee.

In those letters, Cochran had laid out the project's strategy, describing a "ready-to-go" consortium that included French, Russian, Israeli and Ukrainian interests, without naming specific companies.

Mr Gowdy did not respond to requests for comment.

The Wall Street Journal and the Washington Post reported this week that Mr Flynn pushed a version of the nuclear project within the White House by instructing his staff to rework a memo written by a former business associate into policy for Mr Trump to sign.

Two US officials familiar with the issue said the policy document Flynn prepared for Mr Trump's approval proposed working with Russia on a nuclear reactor project but did not specifically mention ACU. The officials, who spoke on condition of anonymity, said they did not know if Mr Trump had read the memo or acted upon it.

‘This was a big win’

On November 18, 2016, 10 days after Mr Trump won the presidential election, ACU's Copson received an email from nuclear non-proliferation expert Reuben Sorensen saying that he had updated Flynn on the nuclear project's status. Sorensen's role in the project was not clear from the emails.

"Flynn is getting closer to (being named) National Security Advisor. Expect an announcement soon. This is a big win for the ACU project," Sorensen wrote.

"Spoke with him via backchannels earlier this week. He has always believed in the vision of the ACU effort ... We need to let him get settled into the new position, but update him shortly thereafter," Sorensen added.

The email can be seen here.

Reuters could not independently confirm a briefing took place. Sorensen did not reply to an email seeking comment.

On November 30, 2016, Copson briefed US Representative Ed Royce, Republican chairman of the House Foreign Affairs Committee, on the nuclear project, an email shows.

Copson was joined by Jim Hamel, a senior official from Curtiss-Wright Corp., which has a nuclear division based in Royce's California district and was eager for a role in the multi-billion dollar project.

In a follow-up email on December 5 to a Royce aide, Mr Hamel wrote, "We hope that the Chairman will follow-up on Alex's suggestion to reach out to General Flynn" to discuss the project.

Royce's spokesman, Cory Fritz, confirmed the briefing to Reuters. "No action was ever taken by the chairman or the committee," he said in an email.

Mr Flynn was an adviser to ACU from April 2015 to June 2016, according to amended financial disclosure forms he filed in August 2017 to the Office of Government Ethics.

Democrats on the House Oversight Committee say that when Mr Flynn applied last year to renew his government security clearance, he failed to disclose a June 2015 trip he made to Egypt and Israel to promote the reactor project. Mr Flynn has not commented on the trips.