Amid racial unrest, Trump brands himself 'president of law and order' 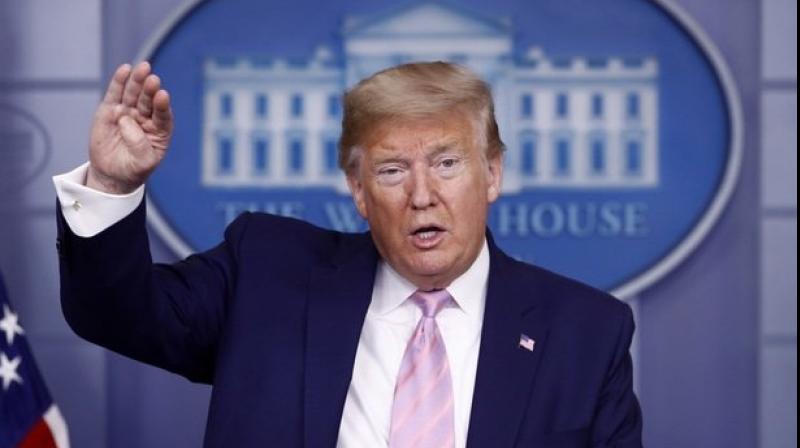 Donald Trump declares himself 'president of law and order' amid protests. (AP Photo)

Washington: Embracing the language of confrontation and war, President Donald Trump on Monday declared himself the “president of law and order” and signaled he would stake his reelection on persuading voters his forceful approach, including deploying US troops to US cities, was warranted in a time of national tumult and racial unrest.

Trump made his Rose Garden declaration to the sound of tear gas and rubber bullets clearing peaceful protesters from the park in front of the White House. It created a split-screen for the ages, with his critics saying the president was deepening divisions at a time when leadership was crucial to help unify a fractured country.

The president’s forceful turn to a partisan posture was reminiscent of the us-vs-them rhetoric he has often used when under pressure, including in the face of the coronavirus pandemic. He has responded to the violence with a string of polarizing tweets, one starkly laying out the political stakes by underscoring the approach of Election Day.

Trump vowed to deploy the US military to America’s own cities to quell a rise of violent protests, including ransacking stores and burning police cars. He offered little recognition of the anger coursing through the country as he demanded a harsher crackdown on the mayhem that has erupted following the death of George Floyd.

Floyd died after a white Minneapolis police officer pinned him down and pressed his neck with his knee as the man pleaded that he couldn’t breathe. Violent demonstrations have raged in dozens of cities across the nation, marking a level of widespread turmoil unseen for decades.

The political ground beneath Trump has greatly shifted in the spring of this election year. He was supposed to be running on a strong economy, but now he’s facing a pandemic, economic collapse and civil unrest not seen since the 1960s.

Indeed, some around the president likened the moment to 1968, when Richard Nixon ran as the law-and-order candidate in the aftermath of a summer of riots and captured the White House. But Trump is the incumbent and, despite his efforts to portray himself as a political outsider, he risks being held responsible for the violence.

Trump emerged after two days out of public view in the White House to threaten to deploy “thousands and thousands” of U.S. troops. Then he made a surprise walk through Lafayette Park to a Washington house of worship known as “The Church of the Presidents” that suffered fire damage in the protests.

“The president just used a Bible and one of the churches of my diocese as a backdrop for a message antithetical to the teachings of Jesus and everything that our church stands for," she said. But he had his campaign moment.

In a video teleconference Monday morning, Trump had scolded governors.

The president urged governors to make more use of the National Guard, which he credited for helping calm the situation Sunday night in Minneapolis. He demanded that similarly tough measures be taken in cities that also experienced spasms of violence, including New York, Philadelphia, and Los Angeles.

Trump’s exhortations came after a night of escalating violence, with images of chaos overshadowing largely peaceful protests. The disturbances grew so heated Friday night that the Secret Service rushed the president to an underground White House bunker previously used during terrorist attacks.