New strategies for an old partnership

The US decision to pull out of the multilateral nuclear deal with Iran has upset its allies. 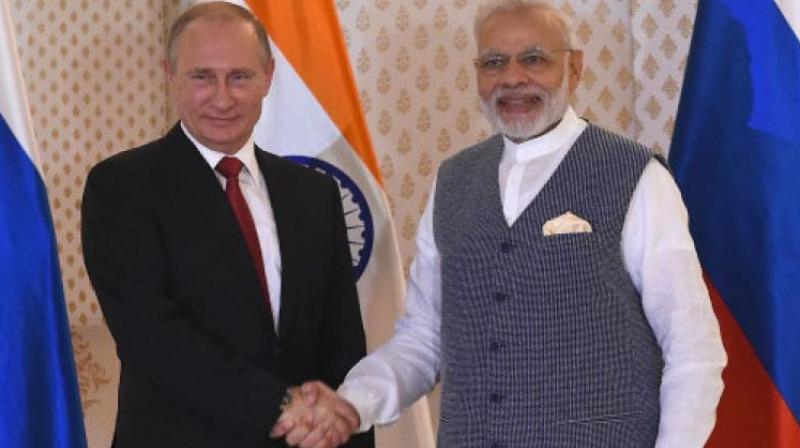 Prime Minister Narendra Modi’s informal summit with Russia’s President Vladimir Putin in Sochi, Russia, on Monday is in the backdrop of global uncertainties and negative perceptions about bilateral relations.

The global uncertainties are all around us. The United States and Russia are in an acrimonious faceoff in multiple conflict zones. America’s ambivalence about its commitment to the security of the Indo-Pacific region has encouraged China to establish its dominance in the area. US President Donald Trump’s decision to hold a direct dialogue with North Korean leader Kim Jong-un has raised questions about the future balance of forces in that region. The US decision to pull out of the multilateral nuclear deal with Iran has upset its allies. Making matters worse are the most recent US sanctions, which target foreign companies with energy or defence links with Iran or Russia.

Given these circumstances, it is important for India to calibrate relations with major powers to maximise its room for manoeuvre. The “reset” with China was part of this exercise. The journey to Sochi is even more important. The strategic partnership with Russia needs to be insulated — to the extent possible — from the US-Russia Cold War.

The main elements of our relations with Russia are well known. They include a similarity of political outlook on major global issues. Defence cooperation remains crucial: 60-70 per cent of the equipment of our armed forces are of Russian/Soviet origin. Notwithstanding the recent increase in defence imports from the United States and elsewhere, statistics show that in the last five years, 62 per cent of India’s arms imports were from Russia. The US contributed 15 per cent. Moreover, we do not have alternative suppliers of equipment equivalent to the Russian S-400 air defence system or of other major technologies that the Russians transfer. There are significant two-way investments in hydrocarbons. Russia is the only foreign country in India’s nuclear energy sector. Efforts to broad-base the economic partnership continue.

While these are objective facts, public perceptions are of a drift in relations. An Indian narrative is that a weakened Russia, under pressure from the West and deferential to China, is less sensitive towards India’s concerns. The corresponding Russian narrative is that India’s worldview is aligning with America’s global objectives.

In reassessing perceptions about Russia, it is useful to recognise a few ground realities:

One, Russia is a permanent member of the UN Security Council and a major military power, with a large nuclear weapons arsenal.

Two, it is an energy superpower with a significant share of global supplies of oil, gas and uranium fuel. It supplies about 30 per cent of Europe’s gas and nuclear fuel requirements.

Three, the impact of Western economic sanctions on Russia is waning, as confirmed by World Bank assessments. Many countries (including European) have found ways around them.

Finally, Russia straddles the Eurasian land mass, with political and economic linkages with countries in our near and extended neighbourhood. Geography is an important determinant of foreign policy.

France and Germany sustain a regular dialogue. Germany’s Chancellor Angela Merkel visited Russia last week; while French President Emmanuel Macron will do so this week. The trade and investment turnover with Russia of both countries has increased significantly in 2017. They have both criticised US sanctions against European energy links with Russia.

Japan, a key US ally, worries about the geopolitical implications of the Russia-China partnership. Japanese PM Shinzo Abe is a frequent visitor to Russia, seeking to resolve their territorial dispute over the Kurile Islands in the Pacific Ocean and move on to closer political and economic engagement.

After its military intervention in Syria in 2015, Russia now plays a major role in West Asia. Nato member Turkey has joined Russia and Iran to mediate in the civil war in Syria. Saudi Arabia, another US ally, coordinates with Russia to regulate global oil production. Both these countries — traditionally Western arms importers — are negotiating for military supplies from Moscow. Israeli Prime Minister Benjamin Netanyahu, another firm US ally, maintains a regular dialogue with President Putin on Israel’s interests in West Asia. He was in Sochi about two weeks ago.

Prime Minister Modi and President Putin are expected to share their perspectives on global developments. They could discuss, in an atmosphere of easy informality, differing perceptions on matters of bilateral concern. India’s global vision is for a multipolar world order, in which we see an important role for Russia. Neither a unipolar, nor a bipolar order — in which China may want to enlist Russia as a junior partner — is in the interests of our two countries. There needs to be an understanding that India’s relations with the United States would not prejudice Russia’s interests. Equally, in relations with China or its proxy war with the US in Afghanistan (where Pakistan plays a role), Russia would be sensitive to India’s security concerns. Both sides have to accept the reality that in today’s world, there cannot be an exclusivity of relations or total congruence of interests. The leaders could discuss how to rectify perceptions of the strategic partnership and encourage a broader economic engagement.

The Sochi visit also sends out the message that India will not be scared of Russia by the American sanctions. As the Europeans have pointed out, extra-territorial application of sanctions infringes sovereign decision-making. In India’s case, sanctions restricting defence cooperation with Russia would severely affect our defence preparedness. As a strategic partner interested in India’s economic and military strength, the US should not impose measures to weaken India. This message would have been conveyed during the recent Indian high-level visits to the US. The Sochi visit will reinforce it.

Formal summits focus on structured agendas and bilateral “deliverables”. They do not give leaders the opportunity for in-depth discussions of global developments and for better understanding of mutual perceptions. Western leaders have developed the practice of frequent, informal summit meetings for such brainstorming. Protocol-conscious Asian leaders have not yet embraced this idea. The Sochi and Wuhan meetings set a good precedent in this respect.