In the past year and a half, terrorists have been targeting the camps of the armed forces, whether in Pathankot in January 2016 or in Uri. 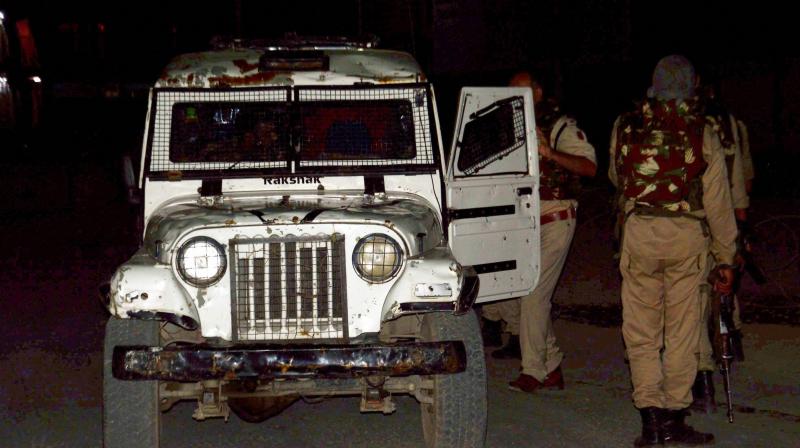 Security person stand guard after militants opened fire on the Amarnath Yatra in which some pilgrims were killed in Anantnag in Jammu and Kashmir. (Photo: PTI)

It is interesting and surprising that Jammu and Kashmir IGP Muneer Khan told a news agency that it was the Lashkar-e-Tayyaba (LeT), the Pakistan-based jihadi outfit, which was the perpetrator behind the terrorist attack on the bus from Valsad, Gujarat, in Anantnag district on Monday night, in which seven Amarnath Yatra pilgrims were killed. He even identified the mastermind as one Ismail. The officer’s statement is surely based on the intelligence sources available to the state police.

In the past year and a half, terrorists have been targeting the camps of the armed forces, whether in Pathankot in January 2016 or in Uri. India’s surgical strike against the terrorist camps across of the Line of Control (LoC) in September last year appear to have targeted the Jaish-e-Mohammed (JeM) camps. It’s not surprising that the jihadists had chosen a soft target — the Amarnath yatris — despite the elaborate security cordon that is thrown around the pilgrims’ cavalcade along the route from Srinagar to Pahalgam, and the trekking track from there to the cave where the stalagmite of Shiva appears at this time. The terrorists struck at the early stage of the route, nearer to the town. There has been a clear security lapse.

This should not, however, be used in the predictable blame game where one security agency likes to pass the buck to another, and sometimes the tour operators are accused of violating the security norms. There is a need for greater surveillance. In this continuous war with the terrorists, there will always be loopholes, which need to be plugged.

Many J&K watchers in the state and elsewhere connect every episode of violence in the Valley to the unresolved “K” question — the long-standing bilateral dispute between India and Pakistan. The knee-jerk response of the Kashmir commentariat is that unless the “K” question is addressed in all its forms, violence of any kind in the Valley will not end. This has only spawned endless discussions, with no workable solution in sight. The political parties in the Valley, including separatists, argue that it is not so much a bilateral as a trilateral issue, where the stakeholders from both Kashmirs (including the part occupied by Pakistan) need to have a place at the negotiating table.

There is, however, little possibility of India, Pakistan and Kashmiris sitting down to resolve the issue. Therefore, it is futile to talk about what could be discussed at such parleys, and what solutions could be acceptable to all the parties. It is this commentariat that is likely to portray Monday’s Lashkar attack on the Amarnath pilgrims as a grave situation that threatens to snap the brittle link that keeps J&K in the Indian Union. With every tragic epicycle of violence in the Valley, the Greek chorus of the commentariat has been foretelling gloom and doom.

That leaves us with the situation as it exists on the ground — jihadi groups operating from across the LoC, separatist groups led by the Hurriyat factions who refuse to take part in the electoral process, and the National Conference (NC), People’s Democratic Party (PDP), the Congress, BJP, Panthers Party, Communist Party of India — which participate in the democratic exercise, and have either been ruling the state or sitting in Opposition in the Legislative Assembly. Whenever any of these parties are in Opposition they adopt more strident tones, and while in office take a more responsible line. This has been the case with the two regional parties — NC and PDP.

The party in power has to deal with the situation that arises out of the terror attacks. Chief minister Mehbooba Mufti has been unsparing in her remarks and gestures towards the attack on the Amarnath pilgrims. The NC has not been far behind. The BJP, which shares power in the state with the PDP and with the NDA members at the Centre, has adopted a calibrated stance, an expression of resolve to deal firmly with the terrorist challenge.

It is a fact that episodes of violence, including terrorist attacks, can be traced back to the “K” question. And whichever political party or coalition is in power at the Centre, it is fully aware that there is no workable solution, and that what needs to be done is to maintain democratic governance in Jammu and Kashmir while fending off challenge from across the border. Even the most biased observer will have to concede that, though former Prime Minister P.V. Narasimha Rao had pushed through Parliament a maximalist and unrealistic resolution claiming what is now Pakistan-occupied Kashmir (PoK) to be an inalienable part of India. Pakistan too has a similar position, though both sides have practical alternatives in mind, which they cannot afford to reveal in public.

India can continue to successfully repel the Pakistan-based jihadi groups warring in J&K though there is a price to be paid for it in terms of valuable human lives and the ruination of the lives of ordinary people in the Valley. And India has no alternative but to fight this battle for J&K and its people. There is little doubt that governments in Srinagar and New Delhi have failed to meet the aspirations of the people of J&K. But that is a failure of the Indian State all over the country, and not in Kashmir alone.

The people of J&K, like people elsewhere in the country are, as a matter of fact, forging their own destiny despite the failure of governments and the volatility created by the jihadi groups. The unstated perception of the people of J&K is that they have a better future in a democratic India compared to the politics of internal instability on the Pakistani side. All that governments in the state and at the Centre have to do is to keep democracy going in Kashmir so that the people can prosper. And simply ignore the Cassandras.