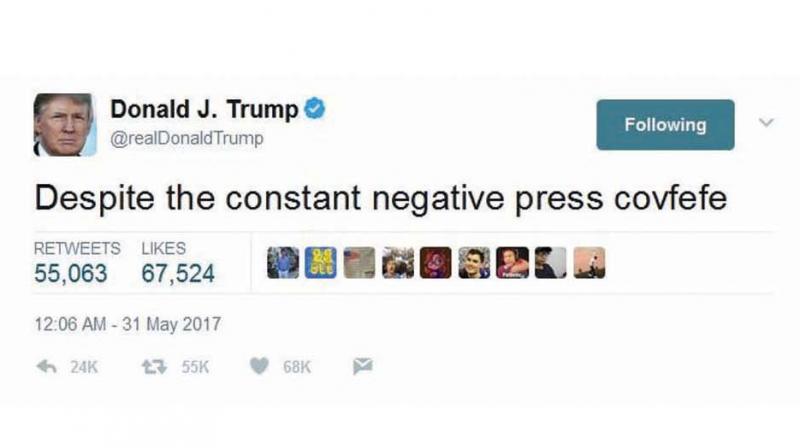 Trump’s midnight twitter typo, ‘covfefe’ took social media by storm. And within a few days of its birth, the ‘word’ became a part of another controversy.

The winner of 2017’s National Spelling Bee contest, Ananya Vinay, sealed her victory with the word ‘marocain’; a dress fabric made of wool or silk or both, but her real test came on CNN, where she was being interviewed upon her victory and was asked to spell ‘covfefe’. While the 12-year-old struggled to spell it, unaware of the word’s context, Twitter wondered if Shakespeare would be turning in his grave now, for there is a new inventor of ‘words’ on the block — US President Donald Trump. Trump’s midnight twitter typo, ‘covfefe’ took social media by storm. And within a few days of its birth, the ‘word’ became a part of another controversy.

CNN anchors further told Ananya that they didn’t know if ‘covfefe’ originated from Sanskrit, which is what she must be ‘familiar with’ and ‘that’s what you’re probably used to’. Twitter was quick to call out on CNN’s racism. Standup comedian, Jeremy McLellan tweeted, “12-year-old Ananya Vinay won the National Spelling Bee so naturally CNN had her on to spell ‘covfefe’ and say some racist stuff to her.”

While people are debating on twitter whether the remarks were racist or not, a student, Karthikeyan Rajadurai, says, “CNN did this with last year’s winners as well. I mostly lived in NYC and Pennsylvania and people were liberal there. Racism is less in places where majority of people are immigrants. Racism only occurs in places with no immigrants. And it’s also not because they hate them, but because they’ve never met immigrants. So racism doesn’t exist in America as it is shown in the media.”

But he adds, “Although the CNN anchors appeared racist, the truth is that they commit blunders all the time. It is not that they are racist, they are just ignorant. Fact checking is nil on that platform.”

Many people on the other hand are clear that the remarks were stereotyping rather than ignorant. Twitter account holder, Ashvin Lad tweeted, “What was with the ‘Sanskrit’ remark? Talk about an underlying assumption there. Would you have said ‘Latin’ if the kid was Caucasian?”

On the other hand Sanskrit professor, Sudhi Kant opines, “While it was wrong of CNN to ask Ananya what they asked, there is nothing wrong in asking someone if they know Sanskrit. Unfortunately, the language is becoming more popular abroad than it is in India. Of course, ‘covfefe’ is just gibberish and to compare that to Sanskrit is also an insult. But one could take it in a positive way and turn it around. Sanskrit is a living language, unlike what many will have us believe. So one could turn around the stereotype and make it something to be proud of. It is all in the attitude.”