BJP is on course to register a massive win, upsetting most pollsters. The party looks likely to finish with over 300 seats. 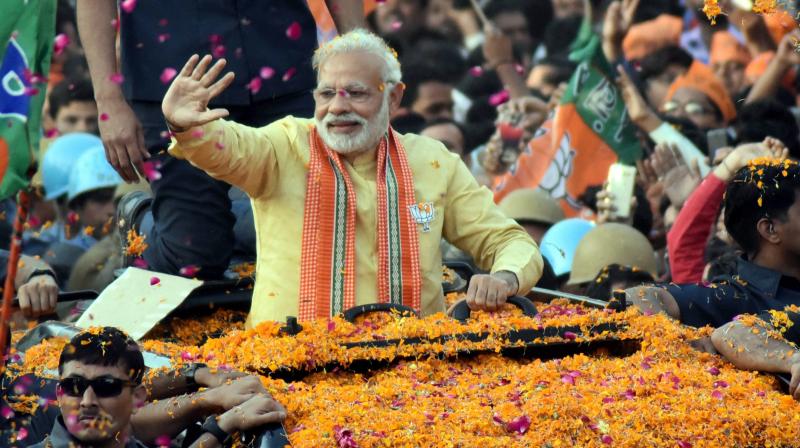 Lucknow:  Bharatiya Janata Party (BJP) on Saturday secured a massive win in Uttar Pradesh, with leads for all the 403 seats available. The saffron party led on 321 seats in the politically crucial state, thus getting a three-fourths majority. The Samajwadi Party-Congress alliance on the other hand, was relegated to just 60 seats.

BJP thus gained its largest ever majority in UP, comfortably overtaking the 221 seats Kalyan Singh won in 1991.

Meanwhile, the much-touted Samajwadi Party-Congress alliance led by Akhilesh Yadav and Rahul Gandhi, which had claimed it would win 300 seats, was completely decimated in most parts of the state.

In a press conference following the BJP's stunning win, its national president Amit Shah said that the saffron party would form the government in 4 states - Uttar Pradesh, Uttarakhand, Manipur and Goa.

The BJP president called the victory in UP the biggest victory by any party after Independence.

Amit Shah also hailed Modi as the most popular leader the country had seen after Independence. "The public has restored the same faith it put in the BJP and Narendra Modi during the 2014 polls," Shah claimed.

The BJP president said the people had embraced the 'politics of performance', casting aside dynasty politics in the state of UP and in the country.

Shah announced that the BJP would felicitate Modi on Sunday evening to mark the astounding performance under his leadership.

However, he refused to divulge as to who would become the new Chief Minister of the state, saying the party would take a decision in the matter.

Perhaps in a sarcastic vein, he said the BJP government would now build better roads and infrastructure than he had as the CM.

Stating that the people's mandate had to be respected, Akhilesh however backed Mayawati's assertion that the EVMs had been tampered with, adding that a probe should be conducted.

The UP CM claimed that perhaps, the people of UP had voted for BJP due to the bullet trains it had promised, prefering them over the expressway the SP government had been constructing. Countering a questioner on the poor state of law and order in the state, Akhilesh said the police in UP were usually the quickest to respond to incidents of crime. He asserted that BJP had won the election by communal polarisation.

After the press conference, Akhilesh Yadav proceeded to Governor Ram Naik's residence and submitted his resignation.

After falling out with his nephew Akhilesh, SP leader and minister Shivpal Yadav was in a tough see-saw battle with Manish Yadav Batre of the BJP in Jaswant Nagar of Etawah. Eventually though, Shivpal defeated the BJP candidate by 52,616 votes.

BSP candidate and gangster-turned politician Mukhtar Ansari, who joined the BSP in January after falling out with Akhilesh Yadav, however won from Mau by a massive 97,199 votes.

Home Minister Rajnath Singh's son Pankaj Singh won from Noida, and his victory was part of a landslide in eastern UP which saw BJP win all 8 seats in Noida and Ghaziabad.

Tainted minister Gayatri Prajapati, who is absconding after the UP Police booked him in an alleged gangrape case and attempt to rape a minor, lost in Amethi.

He was pitted against Garima Singh (BJP), the first wife of Congress leader Sanjay Singh, and Ameeta Singh (Congress) – his present wife. Singh went on to win the constituency.

Besides Mulayam, Chief Minister Akhilesh Yadav, his wife Dimple Yadav had also campaigned on this seat for Aparna but all their efforts went in vain with people selecting the BJP candidate.

Communally sensitive Ayodhya, long a BJP bastion, saw a see-saw battle between BJP's Ved Prakash Gupta and SP's Tej Narayan Pandey. However, in the end, Gupta won by a margin of over 49,000 votes.

Azam Khan won from Rampur while his son Abdullah won from the Swar Tanda seat.

BJP workers across the state began celebrating even as the early trends showed the saffron party taking a comfortable lead.

UP BJP chief Keshav Prasad Maurya had claimed today that BJP would win 2/3rds majority in the state, wiping out SP and BSP.

"We respect the mandate, but development has lost and votebank politics has won," Congress leader Rajiv Shukla said reacting to the result.

But it was Mayawati who was most anguished over the results. The BSP was leading in just 18 seats with leads for all 403 seats available. Subsequently, the BSP chief alleged tampering with EVM machines.

“Either the EVMs did not accept votes other than for BJP, or the votes of other parties have gone to BJP in the EVMs,” Mayawati said in a press conference immediately following the results.

“The BJP did not field a single Muslim candidate. Yet, most votes in Muslim majority constituencies have gone to BJP. This makes it evident that voting machines were manipulated,” she claimed.

“I have written to Election Commission in this regard. People no longer have faith in EVM machines,” Mayawati alleged.

Mayawati challenged PM Narendra Modi and BJP President Amit Shah to once again conduct the election on a paper ballot if they were so sure of their victory.

The incoming results were a complete shift from the results of the 2012 polls, where the BJP had come a cropper with just 47 seats, and the SP had stormed to power with 224.

Uttar Pradesh had witnessed seven-phase polling that started on February 11 and ended on March 8.

Two out of four exit polls this time had showed a near-majority for the Bharatiya Janata Party (BJP) in the Assembly elections, and Today's Chanakya predicted an over two-thirds majority on Thursday.

Only two polls showed a neck-to-neck fight between BJP and the Samajwadi Party-Congress alliance.

In 2012, the Samajwadi Party swept to power defeating incumbent chief minister Mayawati’s Bahujan Samaj Party which had got an absolute majority in the previous elections.