‘Ever since her joining she had to undergo ragging and was also ridiculed for coming from a lower caste,’ Salman said. 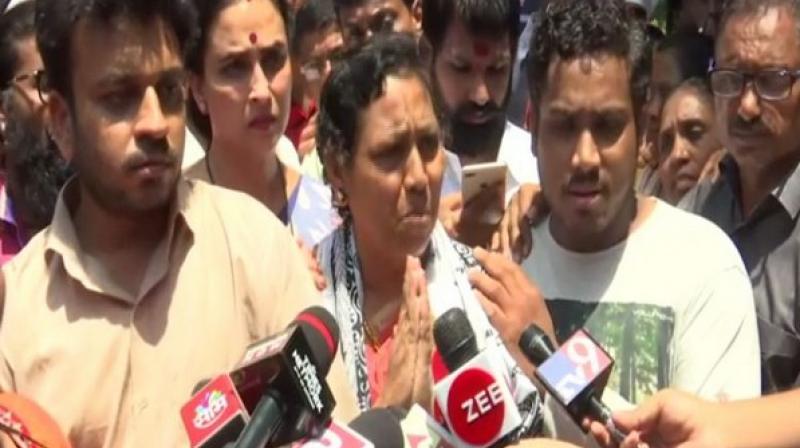 He said that the situation remained unchanged after her return from the posting and accused the administration of not doing enough in the case. (Photo: ANI)

Mumbai: Amidst the row over the suicide of the 22-year-old Dr Payal Tadvi, a protest was held outside the BYL Nair Hospital in Mumbai on Thursday by the victim's mother Abida Tadvi along with her family members, locals and various social organisations.

Salman, late Dr Payal's family member, alleged that the young doctor had been facing casteist slurs from the day she joined the hospital and the situation had turned so bad earlier that they had even requested the administration to intervene.

"She was selected in the Gynaecology department of Nair Hospital in May 2018. Ever since her joining she had to undergo ragging and was also ridiculed for coming from a lower caste. When we came to know about this we complained to the hospital administration of the abuse being meted out by three girls. The administration sided with us at first by sending her to an allied posting and also told us that they would change her unit," Salman told reporters in Mumbai.

He said that the situation remained unchanged after her return from the posting and accused the administration of not doing enough in the case.

"After she came back from the allied posting, they didn't change her unit and the torture on her increased since the three girls got to know of our complaint. They didn't change her department. We tried to submit a letter to the Dean in May, but we were stopped from meeting him so we met the Gynaecology department head instead. She, however, did not support us and stood by the three girls. We wanted to include the Gynaecology department head's name in the letter, that is why we took it back," Salman said.

Demanding justice and prompt action in the case, he said the three accused - Dr Hema Ahuja, Dr Bhakti Mehar and Dr Ankita Khandilwal - are "still roaming free" owing to the influential backgrounds they come from.

"We want justice for Payal, the three girls are still absconding only because they are rich and influential. They are still allowed to roam free even after five days have passed. We don't know the role of police in this but something needs to be done," he stated.

The three accused and the head of the Gynaecology department, Dr Yi Ching Ling, have been suspended by the Maharashtra Association of Resident Doctors (MARD) and the hospital administration.

The hospital had formed an internal investigation committee to look into the allegations by Abida Tadvi that Payal was being harassed by three female seniors for her caste and had also been subjected to ragging.