In a letter to the MARD, the trio has also denied the charges of 'ragging' levelled against them by the victim's mother Abeda Tadvi. 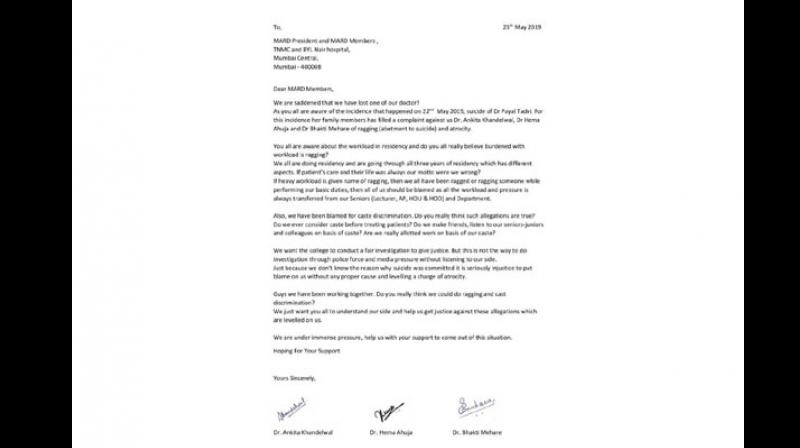 Mumbai: Three doctors - Hema Ahuja, Bhakti Mehar, and Ankita Khandilwal - all accused of abetting Dr Payal Salman Tadvi to commit suicide by persistently harassing her on the pretext of her social identity - have urged the Maharashtra Association of Resident Doctors (MARD) to ensure 'fair' probe into the whole issue.

In a letter to the MARD on Monday, the trio has also denied the charges of 'ragging' levelled against them by the victim's mother Abeda Tadvi.

"We want the college to conduct a fair investigation to give justice. But this is not the way to do investigation through the police force and media pressure without listening to our side," they have stated in the letter.

"Just because we don't know the reason why suicide was committed, it is seriously an injustice to put the blame on us without any proper cause and levelling a charge of atrocity," the letter written and signed by the three doctors reads.

"If the heavy workload is given the name of ragging, then we all have been ragged or ragging someone while performing our basic duties. Then all of us should be blamed as all the workload and pressure is always transferred from our seniors (lecturer, AP, HOU, and HoD) and department," the letter reads.

Denying the allegation of caste-based discrimination, the three accused have written: "Also, we have been blamed for caste discrimination. Do you really think such allegations are true? Do we ever consider caste before treating patients? Do we make friends, listen to our seniors/juniors and colleagues on the basis of caste? Are we really allotted work on the basis of our caste?"

The letter further asks the MARD to help the accused in getting a fair trial and give them a chance to clear the allegations levelled against them by the victim's mother.

"Guys we have been working together. Do you really think we could do ragging and caste discrimination? We just want you all to understand our side and help us get justice against these allegations which are levelled," says the letter.

Abeda Tadvi, mother of Dr Payal, who committed suicide on May 22, has claimed that three senior doctors -- Hema Ahuja, Bhakti Mehar, and Ankita Khandilwal -- at Nair Hospital tortured her daughter, and unable to bear this, she committed suicide.

The administration of the BYL Nair Hospital had formed an anti-ragging committee to probe into the suicide, while Maharashtra Association of Resident Doctors (MARD) has suspended the three accused doctors.

Maharashtra State Commission for Women has issued a notice to Dean of BYL Nair Hospital seeking a report on the action taken in connection with the suicide case.