Capping a landslide election victory, Modi will take oath along with his new council of ministers at 7 pm. 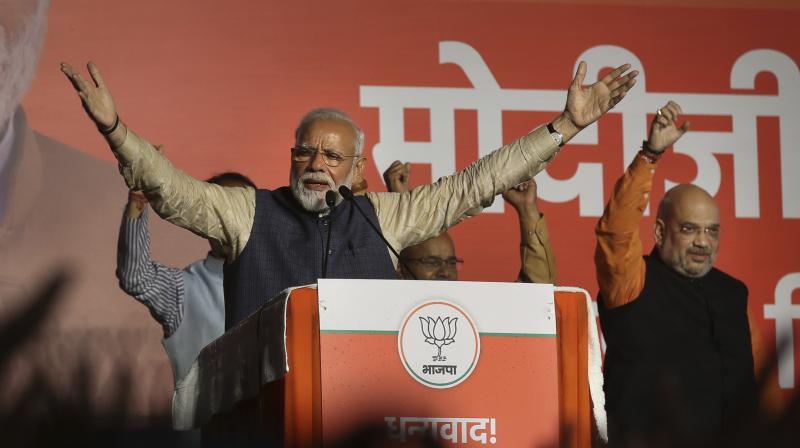 Shah, the architect of BJP’s victory of 303 seats in the Lok Sabha, is believed to be among those who will join the Modi cabinet and is tipped to get either Home or Finance, sources said. (Photo: PTI)

New Delhi: Ministers selected for oath of office will meet Prime Minister Narendra Modi at his residence at 4.30 pm on Thursday, shortly before the swearing-in ceremony, sources said.

Earlier in the morning, the Prime Minister held a final round of consultations with BJP president Amit Shah to give shape to his council of ministers before sending the list to the Rashtrapati Bhavan.

Capping a landslide election victory, Modi will take oath along with his new council of ministers at 7 pm.

As the party geared up for the celebrations, Shah’s Akbar Road residence was decked up. BJP general secretary (organisation) Ram Lal was among those who met Shah at his residence. Modi and Shah have held several rounds of discussions in the last two days ahead of government formation.

Also Read | From venue to menu: Here are the details of Modi’s swearing-in ceremony

Shah, the architect of BJP’s victory of 303 seats in the Lok Sabha, is believed to be among those who will join the Modi cabinet and is tipped to get either Home or Finance, sources said.

Among some of the new faces that are likely to be inducted include Prahlad Patel from Madhya Pradesh, Kailash Chowdhry from Rajasthan, Krishna Reddy from Telangana and Suresh Angedi from Karnataka and Raosaheb Danve from Maharashtra.

BJP allies like Shiv Sena, JD(U), AIADMK, LJP, Akali Dal and Apna Dal are set to be represented in the government.

Each NDA ally is likely to get one cabinet berth, sources said. The Shiv Sena has confirmed its leader Arvind Sawant, who defeated Congress heavyweight Milind Deora from Mumbai, will be its nominee in the council of ministers. Akali Dal leader Harsimrat Badal, who was Food Processing minister in the earlier government, will be in the new council of ministers as well, sources said.

The Lok Janshakti Party has already passed a resolution recommending its president Ram Vilas Paswan as the party’s representative in the Modi government.

The Apna Dal’s Anupriya Patel is likely to be in the council of ministers.

The JD(U) is likely to nominate either Ram Nath Thakur or Santosh Kushwaha, sources said.

Finance Minister Arun Jaitley’s decision to opt out on health grounds has fuelled speculation about who will get his coveted portfolio. Railway Minister Goyal, who filled in for Jaitley and presented the populist pre-election budget, is being seen as a key contender.

The BJP has refrained from making any official comment about the likely members of the government, with its leaders asserting that it is the prime minister’s prerogative.

The swearing-in ceremony in the forecourt of the Rashtrapati Bhavan is expected to be grand affair with about 8,000 guests, including leaders from the BIMSTEC countries, opposition leaders Rahul Gandhi and Sonia Gandhi, chief ministers, corporate honchos and film stars, watching as President Ram Nath Kovind administers the oath of office and secrecy to 68-year-old Modi and his ministerial colleagues.