Aviation firm responsible, crash could have been avoided: Pilot's husband

'I had texted her to see if she had landed or not... then saw the news on TV,' pilot's husband P Kuthariya said. 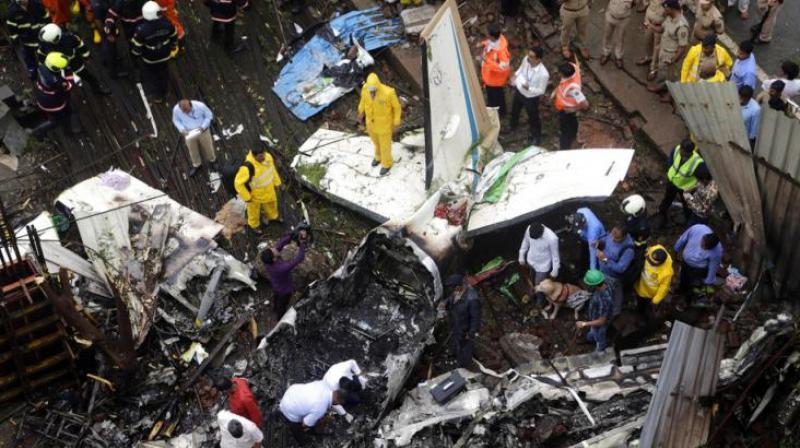 Rescuers stand amid the wreckage of a private chartered plane that crashed in Ghatkopar area, Mumbai. The plane hit an open area at a construction site for a multistory building in a crowded area with many residential apartments. 5 people including one on the ground were killed. (Photo: AP)

Mumbai: The chartered plane that crashed on Thursday in Mumbai, killing four people on board and a pedestrian, could have smashed into a school. It was saved by the diligence of pilot Captain Maria Zuberi and Captain Pradeep S Rajput - said the pilot's husband P Kuthariya.

The pilot of the 12-seater Beechcraft King Air C90 turboprop had also managed to stay clear of the many high-rises in the congested Ghatkopar suburb of Mumbai.

The pilot, who was trying to make an emergency landing at the Mumbai airport after the plane developed engine trouble, fell short of the runway. The plane crashed into an empty construction site before the landing process could be completed.

Read: 5 dead, including one on ground, as chartered plane crashes in Mumbai

P Kuthariya said he learnt of the news from the media. "I had texted her to see if she had landed or not... then saw the news on TV," NDTV reported Kuthariya saying.

He said he got to know that the pilots tried a lot to save the flight. "They crashed before they could complete emergency landing. Maria and Captain Rajput have given their lives for kids and people of Mumbai, they prevented the plane from crashing into a school," he added.

The locals say that the casualties in the Mumbai plane crash could have been more if close to 30 workers who were working at that construction site would not have gone on lunch break.

Read: Pilot saved many lives at cost of her own: Praful Patel on Mumbai plane crash

Apart from the two pilots, there were two others on-board. These included the aircraft maintenance engineer - Surabhi who was more than two months pregnant and aircraft junior technician Manish Pandey.