The attendants in the bus said that there were police personnel posted nearby but they failed to control the situation. 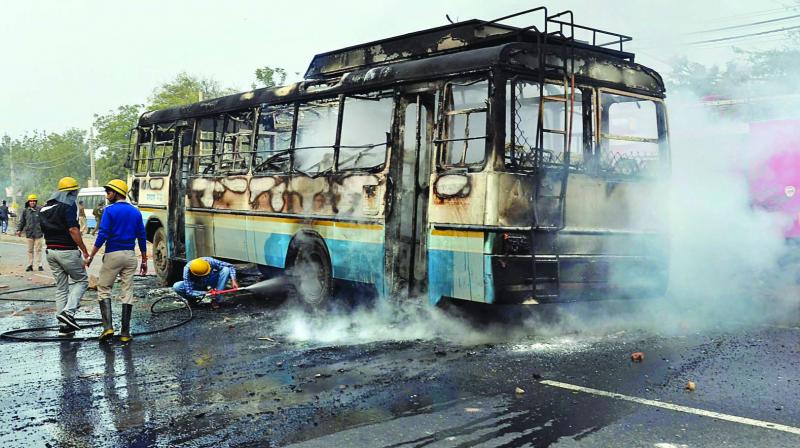 New Delhi/Jaipur: Violent protests and arson attacks spread to towns and cities in several states, including Rajasthan, Haryana, Maharashtra and Uttar Pradesh, on Wednesday, a day ahead of the release of Sanjay Leela Bhansali’s controversial film Padmaavat, as fringe groups that oppose the film remained defiant.

A bus was torched and a highway blocked in Haryana’s Gurgaon where protesters violated prohibitory orders while the police had to use force to disperse an agitating mob in Lucknow. Section 144 CrPC has been imposed around a 200-metre periphery of cinema halls showing the film till January 28, the authorities said.

In a shocking incident, Karni Sena goons protesting against the film’s release attacked a bus of the G.D. Goenka School in Gurgaon on Wednesday afternoon. In a video that has gone viral on social media sites, the protesters can be seen hurling stones at the bus near Sohna Road. Parvesh Kumar, the bus driver, told the media that around 10-15 schoolkids, some as young as 4-5 years old, were in the bus at the time of the attack.

The attendants in the bus said that there were police personnel posted nearby but they failed to control the situation. The attendants made the students duck and covered them to protect them from the attack. In the video, scared children can be seen crying. According to eyewitnesses, pieces of broken glass fell on the head of some children, injuring them.

Read: Uncertainty prevails over Padmaavat release in UP

In another incident, a Haryana Roadways bus was set on fire near village Bhondsi in Gurgaon, allegedly by Karni Sena goons. This hooliganism occurred despite the claims made by the Haryana police that no one would be allowed to disrupt peace in the state in the wake of the controversial film’s release on Thursday.

“Around 13 persons have been arrested for the attack and a case has been filed at Badshahpur police station. Furter investigations are under way,” Guragon police commissioner Sandeep Khirwar said. He added that raids are on to arrest the others behind the attack.

Karni Sena goons protesting against the film had also damaged two state roadways buses in Jaipur and blocked a road in the city’s Kalwar area, while scores of activists were held in Mumbai and Nashik. In Uttar Pradesh, a a fringe outfit even declared a bounty on actress Deepika Padukone’s nose.

With fringe outfits defiant, the Multiplex Association of India, that represents about 75 per cent of multiplex owners, said the film would not be screened in Rajasthan, Gujarat, Madhya Pradesh and Goa. “We have decided not to play the film in four states — Rajasthan, Gujarat, MP and Goa — as the local management has told us the law and order situation is not conducive,” Deepak Asher, the association’s president, said.

In Gujarat, theatre owners said the film would not be screened in any of the multiplexes or single screens till the row was resolved.

In Ahmedabad, the police arrested 50 people over the violence and vandalism outside malls in the city on Tuesday night. As many as 30 bikes and scooters parked outside three multiplexes were set ablaze by the protesters.

Madhya Pradesh was another state where the fringe outfits staged demonstrations. Nearly 200 protesters blocked National Highway 3, which links Agra with

Mumbai, near Pigdambar crossing in Kishanganj area in Indore district and broke glass bottles on the road, the police said.

As the protests raged, a defiant Karni Sena, which has been spearheading the opposition to the Bollywood period drama, sought to pin the blame on film director Sanjay Leela Bhansali. The fringe group’s chief patron, Lokendra Singh Kalvi, also said that a “janta curfew” will be imposed on theatres that screen the movie. He claimed that Shiv Sena leaders had assured the Karni Sena of support on the issue in Maharashtra.

The fringe outfit leader also alleged that a dream sequence between the characters of Alauddin Khilji and Rani Padmavati existed in the controversial film, which, he said, was “intolerable”.

“Those who watched the film on the invitation of the censor board a few days back have said that there is a dream sequence between Alauddin Khilji and Rani Padmavati in the film. We have been demanding that there should be no dream sequence and no romantic scene between the two,” he told a press conference in Jaipur.

Mr Kalvi also claimed that a section of the media had wrongly reported that members of the Karni Sena had seen the film on Tuesday. “This is not true and we are firm on our stand against the film,” he said.

Striking a defiant pose, the Karni Sena leader said that he and other outfit leaders may be arrested and bullets fired but the protest would continue in states like Rajasthan, Haryana, Uttar Pradesh, Gujarat, Maharashtra and Madhya Pradesh.

The film, starring Deepika Padukone, Shahid Kapoor and Ranveer Singh, is based on the saga of the 13th century battle between Maharaja Ratan Singh of Mewar and Sultan Alauddin Khilji of Delhi.

The Supreme Court had paved the way for the film’s nationwide release after some states had issued notifications banning the film. The film, which was earlier named Padmavati and slated for a December 1 release, will now hit theatres worldwide on Thursday, January 25.

In West Bengal, Padmaavat found some powerful support, with state chief minister Mamata Banerjee saying she will be happy if it is screened in the state as the Supreme Court must be respected. “It is a film. The name of the film has also been changed. The states where trouble broke out are ruled by the BJP,” she told reporters at the state secretariat in Kolkata.