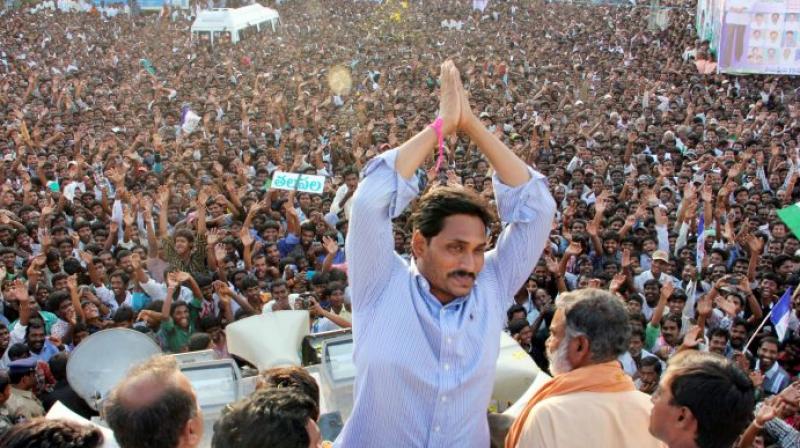 Confident of a victory from initial trends, the YSR Congress camp is reportedly in talks of finalising dates for Jaganmohan Reddy’s swearing-in as the new Andhra Pradesh chief minister.

According to sources, the party meeting would take place on May 25, while Jagan’s swearing-in is likely to happen on May 30.

He submitted his resignation to the Governor of Andhra Pradesh and Telangana ESL Narasimhan who accepted it, a Raj Bhavan press communique said here.

The counting began at 8 am to decide the fate of parties in this first-ever, full-fledged Andhra Pradesh elections after its bifurcation into Telangana in 2014.

As far as Assembly polls are concerned, at least two exit polls have predicted that TDP president N Chandrababu Naidu might get another term as Chief Minister, while one has predicted a huge win for YSR Congress.

The exit poll also predicted 1-3 seats for the Jana Sena Party (JSP) while others are expected to win a maximum of two seats.

Meanwhile, a poll of exit polls conducted by local news channels predicted YSR Congress to win 106 seats out of 175 Assembly seats and predicted 65 seats for the TDP.

The poll of polls is a collective prediction of Lagadapati Exit Polls, People's Pulse Exit Polls, and Mission Chanakya.

Both People's Pulse and Mission Chanakya have given an upper hand to Jagan Reddy with 112 and 91-105 seats respectively.

These polls were also the first since Naidu broke the alliance with BJP-led NDA over the delay in granting special status to Andhra.

In the 2014 election, the TDP led by N Chandrababu Naidu emerged with a majority with 103 seats.

The voting for 175 Assembly and 25 parliamentary seats was held in a single phase on April 11.

The voter turnout recorded was 79.88 per cent which was 1.92 per cent higher than the 2014 Assembly elections.

The state elections were held simultaneously with the 2019 Lok Sabha election.

The prime narrative in the Andhra Pradesh Assembly Election 2019 has, however, been around the special category status for the state as Chandrababu Naidu targeted Prime Minister Narendra Modi for reneging on the commitment.

Also Read: Sikkim Results Live: Will Sikkim see a change or it's going to be SDF again?