This is the first time that the two political parties AIADMK and DMK have contested elections without their supreme leaders. 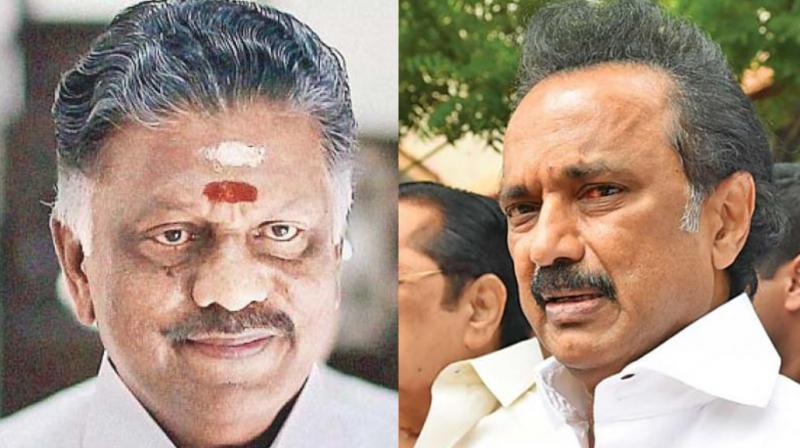 The state witnessed by-election in 22 assembly constituencies. The AIADMK needs four seats to secure the state government whereas the DMK needs 22 seats.

The by-election results are of great significance as they will decide fate of the state leadership which has a minority government in power.

The AIADMK is in coalition with the Bharatiya Janata Party and the DMK has teamed-up with the Congress in this election.

AIADMK was leading in Hosur, Manamadurai, Sathur, Sholinghur and Vilathukulam as released by the Election Commission.

DMK was ahead in Ambur, Gudiyatham, Thiruporur and Thiruvarur, the last being the native constituency of late party chief M Karunanidhi.

The state of Tamil Nadu has witnessed great political turmoil in last three years. The two political stalwarts of the state Jayaram Jayalalitha and Muthuvel Karunanidhi passed away in 2016 and 2018 respectively.

This is the first time that the two political parties AIADMK and DMK have contested elections without their supreme leaders.

The elections were crucial as apart from the Lok Sabha polls for 42 constituencies, the state also had by-polls in 22 assembly constituencies.

The by-polls were necessitated as after Jayalalitha’s demise AIADMK split into two factions. The two factions were led by Jayalalitha’s aide Sasikala and the then Chief Minister of Tamil Nadu O Panneerselvam. Meanwhile, in a major political development, T T V Dhinakaran, the nephew of Sasikala formed a separate political party named Amma Makkal Munnetra Kazhagam appointing Sasikala as its General Secretary and 18 MLAs of the ruling AIADMK defected to the AMMK.

The state has 234-member assembly. In 2016, the AIADMK returned back to power with 134 seats and the DMK secured 89 seats. A political party or front needs to secure at least 118 seats to be in power. The ruling AIADMK has 114 members at present and the DMK has 97 members. The next assembly elections are due in 2021. The AIADMK needs to win four seats to be able to be in the government.

AIADMK's S Muniyandi is up against P Saravanan of the DMK and I Mahendran of the AMMK.

AMMK’s K Sukumar is contesting against Pongalur N Palanisami of the DMK and VP Kandasamy of the AIADMK.

The AIADMK has fielded Senthil Nathan to take on PH Shahul Hameed of the AMMK and Senthil Balaji of the DMK.

Kamal Haasan’s Makkal Needhi Maiam (MNM) will also be contesting for the first time. MNM has fielded 40 candidates (39 in Tamil Nadu and 1 in Puducherry) in the Lok Sabha elections and 20 in the Asssembly election. Some of his key candidates are P Shaktivel, G Mayilsami and S Mohanraj from the Thiruprankundram, Sulur and Aravakurichi Assembly seats respectively. M Gandhi is contesting from Ottapidaram, a reserved constituency.

Haasan had sparked a controversy by calling Nathuram Godse, the assassin of Mahatma Gandhi, “India’s first terrorist” who was a “Hindu”. He also said that “Hindu” was the term given by the foreign invaders as nobody, prior to Mughals, has used the term Hindu. According to him, our identity should be that of “Indians” and not “Hindus”.

The exit-polls have suggested that the DMK-Congress coalition would be bagging most of the seats in the general election. If the trends hold true for assembly elections as well, then the ruling AIADMK may fear losses in the assembly election. Also, some of the sitting MLAs of the AIADMK may switch to the DMK. The AIADMK had called the exit polls as “lies”.

The counting has begun for the assembly election.

Also Read: Sikkim Results Live: Will Sikkim see a change or it's going to be SDF again?