Chidambaram would spend the night at CBI HQ and will be presented before CBI court on Thursday. 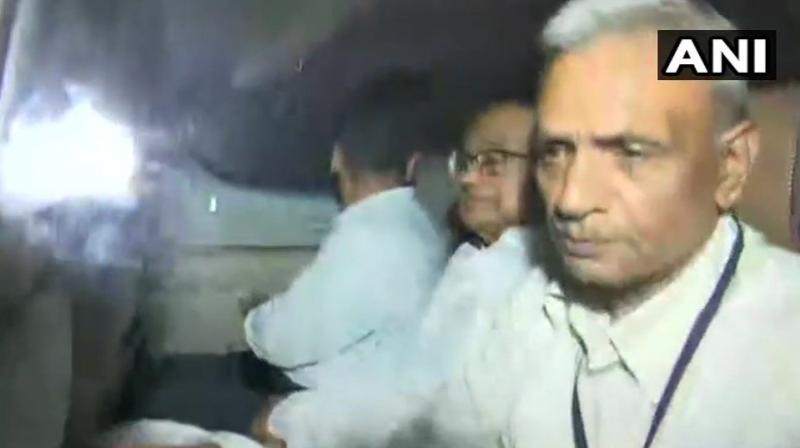 New Delhi: Former Union minister P Chidambaram was arrested by the Central Bureau of Investigation late on Wednesday night in INX Media case after a day-long drama during which the elusive MP’s desperate lawyers failed to protect him from arrest in a money-laundering case. He is most likely to be presented before a CBI court on Thursday.

Missing from Tuesday evening — soon after the Delhi High Court refused him anticipatory bail — Chidambaram surfaced at the Congress headquarters on Wednesday evening to claim innocence. In a brief address he said he had not committed any offence and that he had all faith in the law “even if it was implemented by an unequal hand of probe agencies”. He left the Congress office exactly after six minutes.

Probe agencies — unable to find him in the last 24 hours — were hot in pursuit and reached his Jor Bagh home around 9 pm. Officers scaled the walls and jumped inside as the gate was not opened. As batches of officers reached Chidambaram’s home, some of them were allowed to enter the house. He was bundled into an Ertiga by CBI officials around 9.45 pm and whisked away.

The scene outside his home was chaotic with Congress supporters shouting slogans against Union Home Minister Amit Shah, and some of them subsequently coming to blows with BJP men.

Many of them were detained by the Delhi police.

Yesterday, after the Delhi High Court refused to grant former Union minister P Chidambaram anticipatory bail in a case of money laundering, a team of lawyers representing Chidambaram led by Kapil Sibal knocked the Supreme Court’s door twice in an attempt to file an anticipatory bail plea on his behalf.

What is INX Media Case:

The INX Media case deals with the alleged irregularities in the Foreign Investment Promotion Board (FIPB) clearance to the media group for receiving overseas funds of Rs 307 crore at the time when P Chidambaram was the Union finance minister.

Read: What is the INX media case and how are Chidambarams involved?

On May 15, 2017, the Central Bureau of Investigation (CBI) had registered an FIR, alleging irregularities in the FIPB clearance. In 2018, the Enforcement Directorate (ED) lodged a money laundering case.

Emerging after being in hiding for around 24 hours, former finance minister P Chidambaram cleared himself of all charges against him and his family in INX media case.

In an address to Press at Congress Headquarters in Delhi, Chidambaram said: ''I have not been accused of any wrongdoing in INX media case... no chargesheet was filed by either ED or CBI before a competent court.''

Chidambaram, who went incommunicado on Tuesday after the Delhi High Court rejected his anticipatory bail plea in connection with the INX Media case, said: ''I am aghast that I was accused of hiding from the law. On the contrary, I was seeking the protection of the law... I respect the law even if it is applied with an unequal hand by probe agencies.''

Chidamabaram also spoke about Article 21 that talk about ''Protection of life and personal liberty''. He said: " If I am asked to choose between life and liberty, I will unhesitatingly choose liberty''.