Another bid to amend rape laws: Why and what next?

The amendment bill will have to wait for Monsoon session, which will be convened sometime in July. 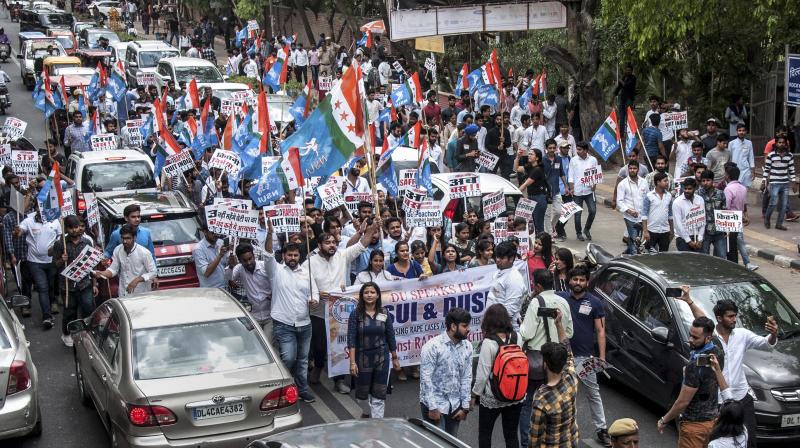 NSUI and DUSU activists display placards and shout slogans during a protest march against rape cases, atrocities against women and various other issues, in North Campus, Delhi University (Photo: PTI)

Mumbai: With rape incidents continuing unabated in the country, citizens of the nation have voiced concern, demanding justice for daughters, sisters and mothers in India. Placards and slogans in towns across the country read: “If we won’t stand for them, then who will?”, “Stop protecting the accused in hate crimes?, “Stop shielding rapists”, “No more alibis for rape” and many more.

After witnessing the nationwide protests and anger, Cabinet is expected to clear an ordinance to award death penalty of those convicted of raping a child up to 12 years of age.

Read: Amid nationwide uproar, cabinet to bring in death penalty for child rape

The rape and fatal assault shook the nation, when a 23-year-old medical student was beaten, gangraped and tortured in a private bus. There were six people, including the bus driver, who raped the woman and beat her friend. The spine-chilling incident generated widespread protests across India and abroad.

All the accused were arrested and charged with sexual assault and murder. Out of six, one of the accused was juvenile, who was convicted of rape and murder and sentenced maximum sentence of 3 years of imprisonment in reform facility. However, other accused, Ram Singh, died in police custody. Rest of the four accused went to fast track trial court and finished prosecution on July 8, 2013. The other four were initially given death by hanging by Delhi High Court but they moved to Supreme Court where their execution was cancelled and given 10 years of imprisonment.

According to Indian laws of press, we aren’t allowed to mention name of the victim, so she was called “Nirbhaya”, meaning fearless. The victim passed away on December 29, 2012.

After the Nirbhaya case, government at the Centre and state level took various safety measures for the women. But it seems all have failed!

This case refers to the rape of 17-year-old girl in Uttar Pradesh’s Unnao, in which the main accused is BJP MLA Kuldeep Singh Sengar. The case came to light when the victim tried to commit suicide outside Chief Minister Yogi Adityanath’s residence.

Initially, there was a delay in filing FIR, taking the accused into the custody as he belongs to the ruling party in the state. But after the intervention of the Allahabad High Court, police swept into action and the BJP MLA was sent to 7-day CBI custody while his brother is in police custody.

The gangrape and murder of an eight-year-old girl in Jammu’s Kathua has once again united the nation like that in 2012 when people took to the streets to voice their concerns over the crimes against women.

On January 10, the minor girl, who hailed from a Muslim Nomadic tribe, had taken her horses to graze in the forests near her home, but did not return. Later, her father filed a missing complaint.

The girl's body was found on January 17 and was sent for post-mortem which revealed that she was raped. The case was transferred to Crime Branch of Jammu and Kashmir police. A chargesheet was filed against eight people for the rape and murder of the minor which included a police officer.

The nation fumed after the brutality of the crime described in the chargesheet was made public. The details included the the eight-year-old was drugged, starved and repeatedly gangraped by men who finally bashed her head with a stone, murdering her. The chargesheet also revealed that one of the accused - a police officer- had asked the killer to wait so he could rape the child one last time.

As the nation was seething with anger over gangrape and murder of a minor in Jammu’s Kathua, another brutal act was reported from Prime Minister Narendra Modi’s home state Gujarat. A nine-year-old girl’s body was found with 86 injuries, including some on her private parts, from near a cricket ground in Surat.

After five-hour long postmortem, it was revealed that the girl was raped and tortured for at least eight days. She was strangled to death. Samples have been sent for forensic tests to determine whether she was drugged or not.

The recent horrific incident includes a six-month-old girl, sleeping next to her parents outside the Rajwada Fort in Indore, who was taken away and raped in an isolated basement some 50 metres away in the early hours of Friday.

Read: Is there an end? Another 6-month-old girl raped, killed in Indore

The accused, 21-year-old Sunil Bheel who was spotted on a CCTV camera carrying the baby on his shoulder, also killed her once he was done. The blood-soaked body of the infant was recovered on Friday afternoon from the basement of the commercial building when a shopkeeper had gone there to open his shop.

The child's body had injury marks on the private parts and the head.

After Nirbhaya case, the laws were amended, the definition of rape was widened which included stalking among the other aspects for women safety.

The assault took place in 2012, and the POCSO Act was finally amended in 2015, as one of the accused was juvenile. When the criminal laws were amended, a provision for death penalty was introduced if the victim died or was left in a "vegetative state". This became the Criminal Law Amendment Act.

Under the new Juvenile Justice (Care and Protection of Children) Act, 2015, the bill allows minors in the age group of 16-18 years to be tried as adults if the commit heinous crimes.

Before the Nirbhaya incident, definition of rape according to Indian law was only defined as “acts of penile-vaginal intercourse” and forcible acts of penetration of vagina, mouth, urethra or anus through penis or an inanimate object did not fall within the definition of rape.

Due to the loopholes in the definition of crime, a large number of rapists would be let-off because there was no law to punish such acts.

The definition was expanded in 2013 to consider rape as “any acts like penetration by penis, or any object or any part of body to any extent, into the vagina, mouth, urethra or anus of a woman or making her to do so with another person or applying of mouth to sexual organs without the consent or will of the woman” constitutes the offence of rape.

The section has also clarified that penetration means "penetration to any extent", and lack of physical resistance is immaterial for constituting an offence.

Except in certain aggravated situation the punishment will be imprisonment not less than 7 years but which may extend to imprisonment for life, and shall also be liable to fine.

In aggravated situations, punishment will be rigorous imprisonment for a term which shall not be less than 10 years but which may extend to imprisonment for life, and shall also be liable to fine.

The recent proposal to amend POCSO can now only be taken up as an ordinance to be passed by the Cabinet, headed by Prime Minister Narendra Modi. The amendment bill will have to wait for Monsoon session, which will be convened sometime in July.