A video shows soldier Aurangzeb being asked by suspected Hizbul Mujahideen terrorists about his role, duties, posting and encounters. 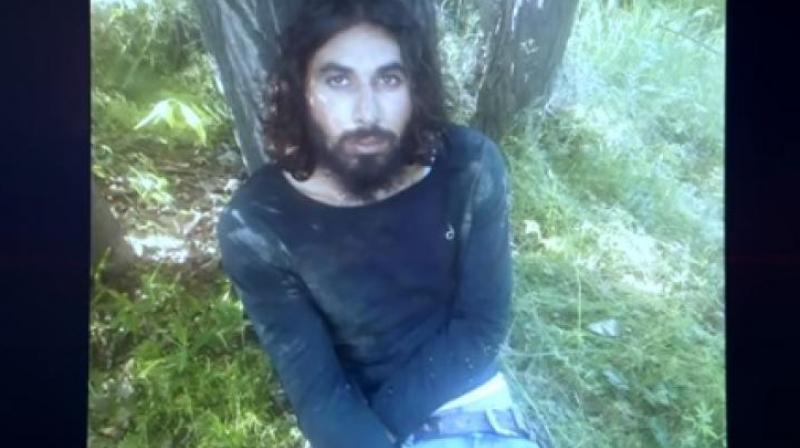 Indian Army soldier Aurangzeb belonged to 4 Jammu and Kashmir Light Infantry and was posted at the 44 Rashtriya Rifles camp at Shadimarg in Shopian. (Photo: YouTube | Screengrab)

Jammu: A video of Army jawan Aurangzeb, which surfaced on Friday, shows suspected terrorists asking him about the encounters he was part of, his postings and responsibilities, officials said on Saturday.

Aurangzeb was abducted at Kalampora when he was on his way home in Rajouri district for Eid. His body was found at Gussu village, about 10 km from Kalampora, in Pulwama district on Thursday night. He was shot in his head and neck, police said.

In the 1.15 minute-video, believed to have been shot in a forest area moments before he was killed, Aurangzeb, in a pair of blue jeans and a T-shirt, is being asked by suspected Hizbul Mujahideen terrorists about his role, duties, posting and encounters, an officer said.

Here is the transcript of the video:

Terrorist: Where do you live?

Aurangzeb: Pulwama... I am a soldier. I get on-post duty.

Terrorist: Were you behind Mohammed, Wasim and Talha Bhai's encounter?

Did you mutilate the body?

Aurangzeb: No, I had injury in hand.

Terrorist: What caused the injury?

Aurangzeb: Happened due to firing.

Terrorist: Who insulted the three?

Aurangzeb: Yes, there was firing.

Terrorist: After the terrorists were martyred?

The trooper, who was said to be a "buddy" of a company commander, belonged to 4 Jammu and Kashmir Light Infantry and was posted at the 44 Rashtriya Rifles camp at Shadimarg in Shopian.

The Army personnel had stopped a car on Thursday morning and requested the driver to drop Aurangzeb to Shopian, officers recounted.

When their vehicle reached Kalampora, terrorists stopped them and kidnapped Aurangzeb.

Father of Army jawan Aurangzeb said, "My son has abided by his pledge, he has kept his promise. He sacrificed himself for the nation and came back to me. I request the central and state governments to eliminate militancy," said Mohd Hanif, father of the Army jawan.

#WATCH Mohd Hanif, father of Rifleman Aurangzeb who was abducted&killed by terrorists in Pulwama, on June 14, says,"My son has abided by his pledge, he kept his promise. He sacrificed himself for the nation & came back to me. I request central&state govts to eliminate militancy." pic.twitter.com/fR02uDrA81

In May last year, a young, unarmed army officer was kidnapped by terrorists while he was attending a family wedding. His bullet-ridden body was found the next day.

Ummer Fayaz, 22, was a Lieutenant of the Rajputana Rifles and had joined the army five months ago.