India   All India  15 Aug 2021  In a first, 20 ITBP personnel awarded for fighting Chinese troops in Ladakh
India, All India

In a first, 20 ITBP personnel awarded for fighting Chinese troops in Ladakh 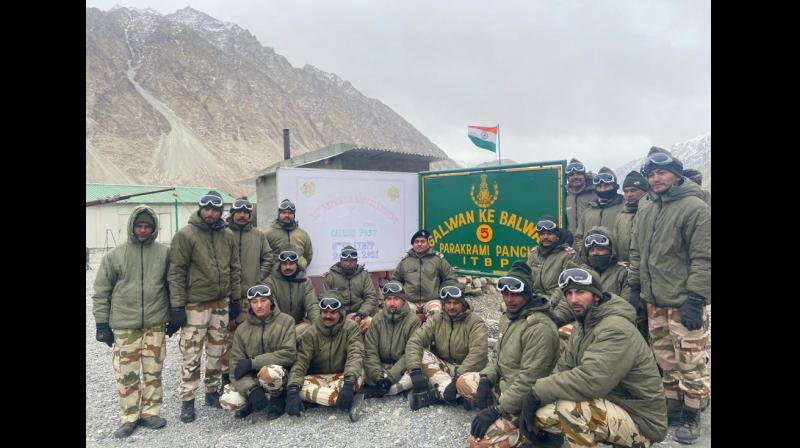 New Delhi: The Union home ministry has for the first time awarded 20 personnel of the Indo-Tibetan Border Police (ITBP) gallantry awards for showing exemplary bravery during clashes with Chinese troops in the Eastern Ladakh sector of Galwan Nalla and Finger IV region in May and June last year. A total of 628 Gallantry Medal have been awarded to police personnel of Central and State forces on the occasion of Independence Day.

Twenty-three ITBP personnel have been awarded the Police Medal for Gallantry out of which 20 have been awarded for their bravery in the clash with Chinese PLA troops. This is the largest number of gallantry medals received by ITBP, which is deployed along the Indo-China border.

Eight of these ITBP soldiers have been given the Gallantry Medal for fighting the PLA troops in the Galwan Nalla area on June 15 last year while six others have been awarded the medal for their bravery during the clash on May 18 last year in the Finger IV area.

Six ITBP personnel who were deployed posted near Hot Springs in Ladakh on 18 May during clashes with China have also been given the Gallantry Medal.

In addition, ITBP personnel deployed in Chhattisgarh for anti-Naxal operations have also been awarded.

The ITBP played a significant role in pushing back Chinese PLA troops in the Ladakh sector following violent clashes in May and June last year.

Chinese PLA had transgressed into Indian territory in Ladakh sector last year at several points, leading to violent clashes. Even now ITBP is maintaining high alert in Ladakh region and both sides are said to have deployed nearly 60,000 troops along the LAC in this sensitive area.

Among the personnel receiving gallantry awards, 256 are from J&K Police, 151 from CRPF, 23 are from ITBP and 67 are from Odisha Police, 25 are from Maharashtra and 20 are from Chhattisgarh and other states and Union Territory.