The top court, while citing 2009 judgement, also said organisers were responsible for any violence reported during procession. 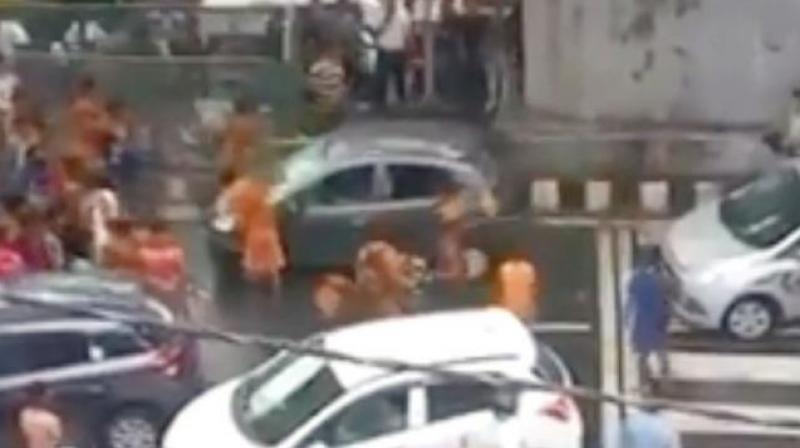 On Wednesday, a group of Kanwariyas, armed with iron rods and sticks, smashed a car in Delhi's South Moti Nagar area. (Photo: File)

New Delhi: After videos showcasing vehicles being vandalised by Kanwariyas across Northern states went viral on social media, the Supreme Court on Friday directed the police to take strict action against those responsible for erupting violence and breaching laws.

A three-judge bench of the apex court, headed by Chief Justice of India Dipak Misra, and comprising Justices A M Khanwilkar and D Y Chandrachud, reiterated an earlier verdict, which stated that videography of every procession should have to be made.

The top court, while citing the 2009 judgement, also said that the organisers were responsible for any violence reported during the procession.

On Wednesday, a group of Kanwariyas, armed with iron rods and sticks, smashed a car in Delhi's South Moti Nagar area after the driver allegedly tried to brush past one of them while moving on a busy road.

Read: Watch: Kanwarias create ruckus, damage car that brushed past them in Delhi

A similar incident also took place in Uttar Pradesh's Bulandshahr district on August 7, wherein Kanwariyas were filmed attacking a police SUV on a busy road, and also indulged in an altercation with the locals.

Six Kanwariyas, including main accused Pappu, were arrested in connection with the attack on Friday.

"Those on spiritual pilgrimage are lost in the devotion of God, and can never be violent. But if some anti-social elements get involved then we will take strict action, no one will be spared irrespective of who he is," he told news agency ANI.

Kanwar pilgrims are the devotees of Hindu God, Shiva, who embark on a pilgrimage every year during the Hindu month of Saavan.

Pilgrims can be seen carrying heavy pots filled with Ganga water on their shoulders, which they empty at the temples of Lord Shiva.