Babu Bhandari (Akshaye Khanna), a local politician in Karnalganj in Bihar, is more of a goon whose word is everyone’s command. 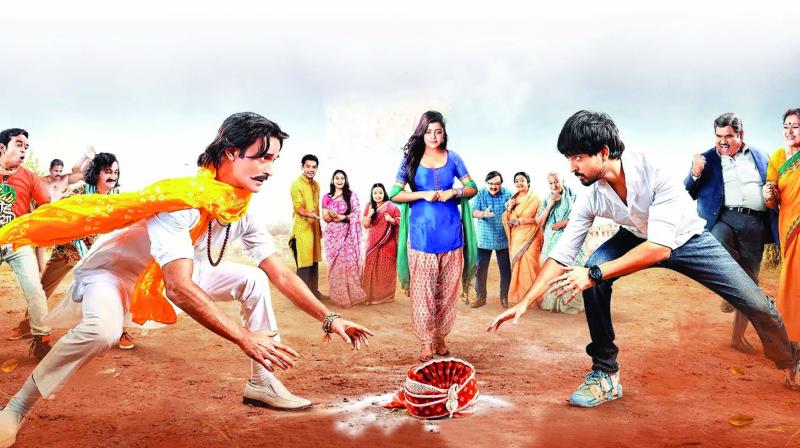 Forced marriages or marriages by abduction in some parts of our country are old hat, but those of us who have lived in the western parts of Bihar and eastern Uttar Pradesh in India would know more about “groom kidnapping” too, which is popularly known as Pakaruah shaadi or Jabaria shaadi wherein eligible bachelors are abducted by the bride’s family and later forcefully married to avoid heavy dowry costs.

The Karan Vishwanath Kashyap-directed Sab Kushal Mangal explores what another 2019 film Jabariya Jodi did; the difference is: the latter adds a new twist, shifting the focus from the kidnapped to the kidnapper, as the abductor himself falls for the bride-to-be he was so keen to marry off. As if this wasn’t enough, the shanghaied boy himself — a prized catch — begins to like the girl.

Babu Bhandari (Akshaye Khanna), a local politician in Karnalganj in Bihar, is more of a goon whose word is everyone’s command. Therefore, be it awarding the Man of the Match trophy at a cricket match where he is a chief guest, or desiring his whim at any other event, he gets away with people following what he wants. Babu’s so called do-gooder social service of looking for “qualified” young men and marrying them off to girls whose parents can’t afford dowry is lauded by most, and he faces little opposition until television host Pappu Mishra of the show Musibat Odh Li Maine exposes him on his show. Babu’s hackles are raised to the point that he decides to teach Mishra a lesson, and kidnaps him to set up an alliance between him and a vivacious girl Mandira (Riva Kishen). As the day of their marriage approaches, Mandira or Mandu — who is no plain Jane — gets nervous about the groom’s whereabouts she is supposed to be with for her lifetime, and is keen to know more about him. She manipulates her way into finding where Mishra has been held captive. She is on seventh heaven when she catches a glimpse of him and things would have been all hunky dory but for her overhearing Mishra’s last-ditch efforts to escape and posing himself as a Casanova who changes girlfriends every now and then — that makes her livid with rage, and she decides to set up a sting operation against him. Around the same time, Babu too sets his eyes on her, and falls head over in heels in love with her natural charm.

This is Khanna’s solo after a long time and the first hour is a breeze with him hogging more than his share of screentime, and making good use of it too. Relying less on his staple mannerisms and, maybe, trying to abandon some of them too, he tries his hand at comedy, delivering lines that don’t really offer much support. His receding hairline is so badly disguised by false hair that he looks a caricature of his earlier self. He doesn’t have the chutzpah required for a character who is so self-obsessed and rather loutish when he attempts to mouth dialogues in his own style, letting the Bhojpuri accent slip here and there. When he decides to alter and modify his looks to make himself more presentable for Manu, he does fill in the gaps and loose ends of the script with his good timing. What lets him down are some very predictable scenes that elicit more yawns than any laughs.

Both Priyank Sharma and Riva Kishen look the representatives of a small town to perfection. In other supporting roles, Satish Kaushik and Supriya Pathak as Priyank’s parents infuse too much effort into their parts to make them look natural but can’t help salvage the badly written scenes. Limited in their overall appearances as they are, it would do both a world of good if they chose their roles carefully and did justice to their talent to showcase their potential, and not accept films for the sake of bagging them.

Writers Karan Viswanath Kashyap and actor Brijendra Kala lose the plot once the leads fall for each other and Babu’s sudden lovestruck suitor seems too contrived. The uninspiring plot gets all the more compounded when the story progresses to make Babu’s character look kind and gentle.

A piece of sound advice to the director: If you are so keen to make a 132-minute film on groom kidnapping, decide what genre you want the film to be in — a laugh riot comedy or a masala entertainer. It would help to do some serious research to come up with more side-splitting quirky ways where interchanges add more sputtering bursts than mere forced chuckles.

The result: save for the lead actor, nothing “kushal mangal” in this feeble comedy!