'These tactics are particularly evident in China's pursuit of territorial claims along its border with India and Bhutan,' the report said 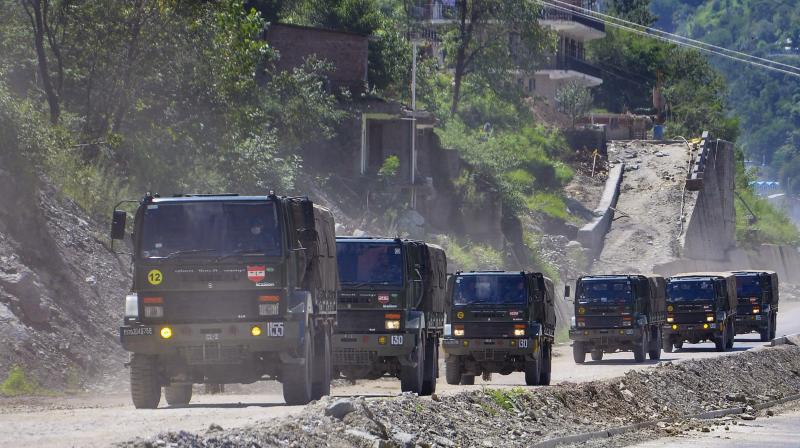 Army trucks move towards Ladakh via Leh–Manali Highway, in Manali. Chinese and Indian patrols regularly encounter one another along the disputed border, and both sides often accuse one another of border incursions, the report said.(PTI)

Washington: China has been using coercive tactics in pursuit of territorial and maritime claims in the South and East China Seas, as well as along its border with India and Bhutan, the Pentagon said on Tuesday.

China is engaged in hotly contested territorial disputes in both the South China Sea and the East China Sea. Beijing has built up and militarised many of the islands and reefs it controls in the region. Both areas are stated to be rich in minerals, oil and other natural resources and are vital to global trade.

China claims almost all of the South China Sea. Vietnam, the Philippines, Malaysia, Brunei and Taiwan have counterclaims over the area.

"China's leaders use tactics short of armed conflict to pursue China's objectives. China calibrates its coercive activities to fall below the threshold of provoking armed conflict with the United States, its allies and partners, or others in the Indo-Pacific region," the Pentagon said in its annual report on China to the Congress.

China has been fast expanding military and economic influence in the Indo-Pacific region, triggering concern in various countries of the region and beyond.

"These tactics are particularly evident in China's pursuit of its territorial and maritime claims in the South and East China Seas as well as along its border with India and Bhutan," said the report titled 'Military and Security Developments involving the People's Republic of China 2020' that was released by the Pentagon.

In recent years, the People's Liberation Army (PLA) has also increased patrols around and near Taiwan using bomber, fighter, and surveillance aircraft to signal Taiwan. China also employs non-military tools coercively, including economic tools during periods of political tensions with countries that Beijing accuses of harming its national interests, the report said.

Even as China settled 11 land-based territorial disputes with six of its neighbours, since 1998, in the recent years, Beijing has employed a more coercive approach to deal with several disputes over maritime features and ownership of potentially rich offshore oil and gas deposits, it said.

"Tensions with India persist along the northeastern border near the Indian state of Arunachal Pradesh, which China asserts is part of Tibet and therefore part of China, and near the Aksai Chin region at the western end of the Tibetan Plateau," the Pentagon said in its report to the Congress.

Chinese and Indian patrols regularly encounter one another along the disputed border, and both sides often accuse one another of border incursions, it said.

However, Chinese and Indian forces have regularly interacted since the 2017 Doklam standoff and generally kept disputes from escalating in 2019, it said.

After the 22nd round of India-China border talks held in September 2019, China and India agreed for the first time to coordinate patrolling at one disputed point along the Line of Actual Control in Arunachal Pradesh as a confidence-building measure to maintain peace at the border, the reported said.

The report, however, makes no mention of the latest border row between India and China in Ladakh.

India and China have held several rounds of military and diplomatic talks in the last two-and-half months but no significant headway has been made for a resolution to the border row in eastern Ladakh.

Giving its assessment of India-China border in 2019, the Pentagon said that officials from China and India continued regular meetings regarding their disputed border, while low-level face-offs persisted between Chinese and Indian military personnel.

Chinese and Indian forces both continued construction and patrols in contested regions along the disputed border, but generally kept tensions from escalating in 2019, it said.

In October 2019, President Xi Jinping met with Prime Minister Narendra Modi in Chennai to discuss economic relations and the importance of the peaceful resolution of contentious issues, particularly regarding the border. This meeting was the second summit between Xi and Modi, the first of which occurred in April 2018 following the 2017 Doklam standoff, it said.

In August 2019, China submitted "early harvest" proposals regarding China-India border issues to India, which was the first time that China had approached India with resolution proposals, the report said.

Although India was not pleased with the proposals, the 22nd meeting of the Special Representatives of India and China occurred in December 2019 and reinforced both sides' shared intent to manage tensions in the border region, it said.