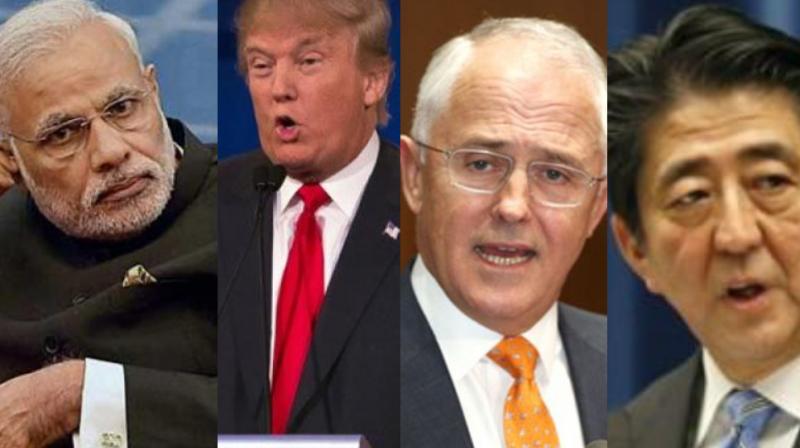 The source added that the preferred terminology was to call the plan an ‘alternative’ to China’s Belt and Road Initiative, rather than a ‘rival.’ (Photos: File)

Sydney: Australia, the United States, India and Japan are talking about establishing a joint regional infrastructure scheme as an alternative to China’s multibillion-dollar Belt and Road Initiative in an attempt to counter Beijing’s spreading influence, the Australian Financial Review reported on Monday, citing a senior US official.

The unnamed official was quoted as saying the plan involving the four regional partners was still "nascent" and "won’t be ripe enough to be announced" during Australian Prime Minister Malcolm Turnbull’s visit to the United States later this week.

The official said, however, that the project was on the agenda for Turnbull’s talks with US President Donald Trump during that trip and was being seriously discussed. The source added that the preferred terminology was to call the plan an "alternative" to China’s Belt and Road Initiative, rather than a "rival."

"No one is saying China should not build infrastructure," the official was quoted as saying. "China might build a port which, on its own is not economically viable. We could make it economically viable by building a road or rail line linking that port."

Representatives for Turnbull, Foreign Minister Julie Bishop and Trade Minister Steven Ciobo did not immediately respond to requests for comment.

Also Read: Nothing against India: China on CPEC extension to Afghanistan

"It is not the case that this is to counter China’s Belt and Road," he said.

Japan, meanwhile, plans to use its official development assistance (ODA) to promote a broader "Free and Open Indo-Pacific Strategy" including "high-quality infrastructure", according to a summary draft of its 2017 white paper on ODA. The Indo-Pacific strategy has been endorsed by Washington and is also seen as a counter to the Belt and Road Initiative.

First mentioned during a speech by Chinese President Xi Jinping’s to university students in Kazakhstan in 2013, China’s Belt and Road plan is a vehicle for the Asian country to take a greater role on the international stage by funding and building global transport and trade links in more than 60 countries.

Xi has heavily promoted the initiative, inviting world leaders to Beijing last May for an inaugural summit at which he pledged USD 124 billion in funding for the plan, and enshrining it into the ruling Communist Party’s constitution in October.

Local Chinese governments as well as state and private firms have rushed to offer support by investing overseas and making loans.

In January, Beijing outlined its ambitions to extend the initiative to the Arctic by developing shipping lanes opened up by global warming, forming a "Polar Silk Road".

The United States, Japan, India and Australia have recently revived four-way talks to deepen security cooperation and coordinate alternatives for regional infrastructure financing to that offered by China.

The so-called Quad to discuss and cooperate on security first met as an initiative a decade ago - much to the annoyance of China, which saw it as an attempt by regional democracies to contain its advances. The quartet held talks in Manila on the sidelines of the November Asean and East Asia Summits.