45 palestinians have been killed by Israeli fire since the Great March of Return on March 30, with more than 1,500 wounded. 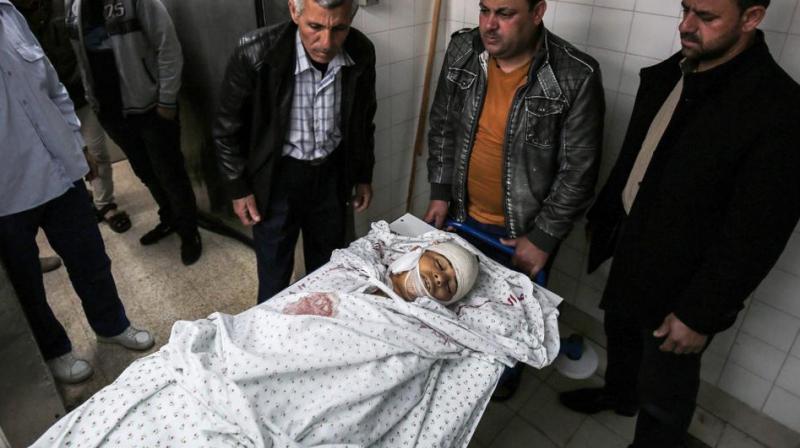 Relatives of 15-year-old Palestinian teenager Azzam Oweida gather around his body in the morgue of a hospital in Khan Yunis in the southern Gaza Strip on April 28, 2018, as he succumbed to his wounds a day after he was shot by Israeli forces in clashes along the Gaza border. (Photo: AFP)

Gaza City: A Palestinian teenager has died of his wounds a day after being shot by Israeli forces in clashes along the Gaza border, the Hamas-controlled territory’s health ministry said Saturday.

Azzam Oweida, 15, was hit in the head during protests in southern Gaza on Friday, the ministry said.

His death brought to four the number of people killed or fatally wounded during a fifth consecutive Friday of protests in which thousands of Gazans have gathered near the heavily-guarded border.

Most protesters were peaceful but some threw stones and burned tyres.

Forty-five Palestinians have been killed by Israeli fire since the start of what organisers have dubbed the Great March of Return on March 30, with more than 1,500 wounded.

No Israelis have been reported hurt.

The Israeli army said around 10,000 people had taken part in “riots” along the border Friday, saying troops responded with “riot dispersal means”.

The army has accused Hamas, the Islamist group that runs Gaza and has fought three wars with Israel since 2008, of seeking to use the protests as cover to carry out attacks.

Marchers are demanding the right to return to their homes seized by Israel in 1948.

Israel says that would mean the end of the Jewish state, and accuses Gaza’s Islamist rulers Hamas of using the protests as a pretext for violence.

The Israeli military said that at one point on Friday protesters had used “explosive devices, hand grenades and firebombs” as they attempted a mass breach of the border fence.

In what the military said was a direct response, Israeli warplanes on Friday night attacked “six military targets belonging to the Hamas terror organisation’s naval force in the Gaza Strip.”

It did not give the location of the targets, but the Hamas interior ministry in Gaza said aircraft -- originally reported as drones -- hit Gaza’s main port, damaging two boats but causing no injuries.

Eyewitnesses at the port said the two boats were badly damaged. Hamas security forces prevented journalists from reaching the scene.

It is believed to have been the first time Israeli aircraft had targeted boats in Gaza since the 2014 war there between Israel and Hamas.

The protest movement is officially independent but has the backing of Hamas, which has fought three wars with Israel since 2008.

On Friday protesters again gathered at five sites near the border fence, though numbers were down on previous weeks.

Three men were shot dead, according to Gaza’s health ministry, while the Gaza Centre for Media Freedom said three journalists were among those wounded.

Demonstrations are expected to spike again ahead of May 14, when the United States plans to move its embassy from Tel Aviv to Jerusalem.

The decision has infuriated Palestinians, who see the annexed eastern half of the holy city as the capital of their future state.

US President Donald Trump, who tore up decades of policy by recognising Jerusalem as Israel’s capital, said Friday he “may go” to the city for the embassy opening.

That came as Amnesty International called for an arms embargo against Israel over its use of live fire in Gaza.

Israel has rejected calls for an independent investigation into deaths along Gaza’s border. The army says its troops only use live ammunition as a last resort.