‘Dozens of groups have pulled out of planned visits to Bethlehem after being scared off by the announcement and subsequent violence. 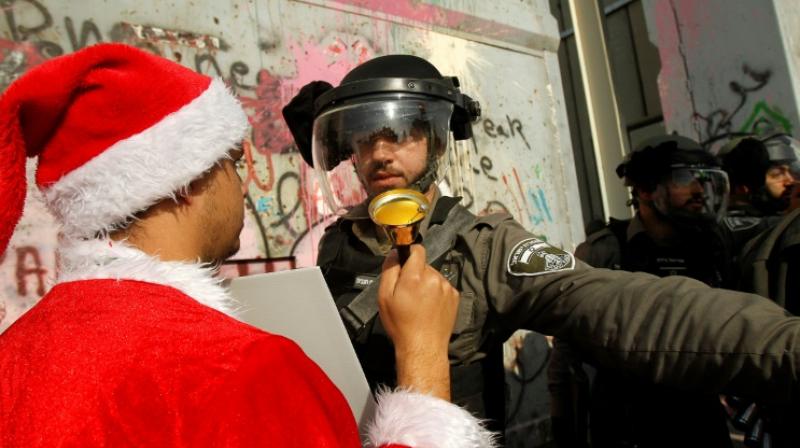 The annual scouts parade in Bethlehem will march through Manger Square near the Church of the Nativity, built over the spot where tradition says Mary gave birth to Jesus and where celebrations will culminate with midnight mass. (Photo: AFP)

Bethlehem (Palestinian Territories): Preparations were under way in Bethlehem Sunday for Christmas, with tensions still simmering in the city and the region following Washington's decision to recognise Jerusalem as Israel's capital.

The controversial December 6 announcement by President Donald Trump unleashed demonstrations and clashes, including in the Israeli-occupied West Bank city Bethlehem, where Christians will mark the birth of Jesus in a midnight mass.

Bethlehem is normally flooded by tourists at this time of year, but has at times appeared almost empty of visitors as nearby clashes between Palestinian protesters and the Israeli army keep people away.

Archbishop Pierbattista Pizzaballa, apostolic administrator of the Latin Patriarch of Jerusalem, said "dozens" of groups had pulled out of planned visits after being scared off by the announcement and subsequent violence.

"Of course this created a tension around Jerusalem and this diverted attention from Christmas," the Catholic church's top official in Jerusalem said of Trump's announcement, but stressing that Christmas celebrations would go ahead as planned.

Perhaps as few as 50,000 Palestinian Christians make up just around two per cent of the predominantly Muslim population of the West Bank and east Jerusalem.

Israel's tourism ministry has said that Christmas preparations have not been affected and that it expects a 20 per cent increase in the number of Christian pilgrims this year compared with 2016.

The ministry plans to operate a free shuttle service for the short distance between Jerusalem and Bethlehem for mass.

An Israeli police spokesman said that extra units will be deployed in Jerusalem and at the crossings to Bethlehem to ease the travel and access for the "thousands of tourists and visitors".

The annual scouts parade in Bethlehem will march through Manger Square near the Church of the Nativity, built over the spot where tradition says Mary gave birth to Jesus and where celebrations will culminate with midnight mass.

Israel seized east Jerusalem in the 1967 Middle East war and later annexed it, in moves never recognised by the international community.

Palestinians view east Jerusalem as the capital of their future state, and interpreted Trump's statement as rejecting their right to a capital in east Jerusalem, although the

In a statement ahead of Christmas, Palestinian president Mahmud Abbas said Trump's announcement "encouraged the illegal disconnection between the holy cities of Bethlehem and Jerusalem, both separated for the first time in over 2,000 years of Christianity".

Abbas called on "world Christians to listen to the true voices of the indigenous Christians from the Holy Land...that strongly rejected the US recognition of Jerusalem as Israel's capital".

"They are the descendants of the first followers of Jesus Christ and an integral part of the Palestinian people," Abbas said, calling the local Christian community "an inherent part of our societies".

In neighbouring Egypt, Coptic Christians who celebrate Christmas on January 6 saw a church in Giza attacked by a mob following Muslim prayers on Friday, the latest in some 20 such incidents in 2017.

But in Iraq, 2017 marks a positive turning point for the Christian community in the northern city of Mosul.

Christmas mass will be celebrated there for the first time in years following the city's recapture from the Islamic State group in July.

IS seized Iraq's second most populous city as part of a lightning offensive in 2014, driving out many Christians, and only small numbers have since returned.

Christian dignitaries as well as Iraqi political and military leaders are expected to attend the annual service at St Paul's Church in the eastern sector of Mosul.