World   Middle East  23 May 2017  Video: On Israel visit, Trump offers hand to US First Lady who brushes it off
World, Middle East

Video: On Israel visit, Trump offers hand to US First Lady who brushes it off

The moment was captured as they walked down the red carpet at Ben Gurion airport with Israel PM Benjamin Netanyahu and his wife Sara. 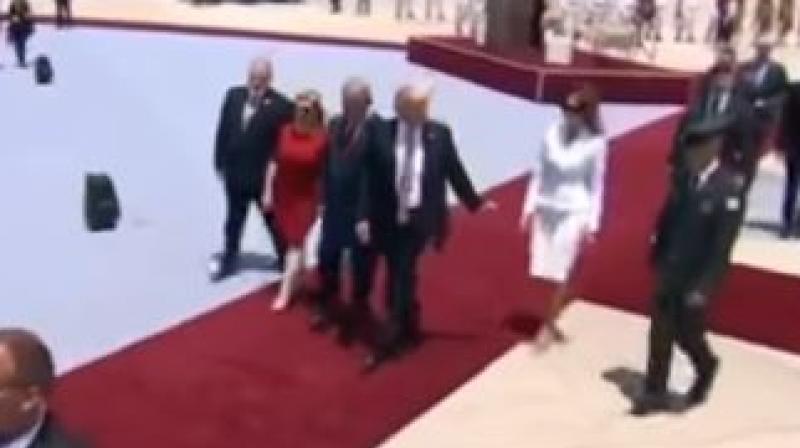 Jerusalem: Cameras caught First Lady Melania Trump brushing off US President Donald Trump’s hand as he held it out to her, on their first visit to Israel.

According to media reports, the awkward moment was captured as the US president and Melania walked down the red carpet at Ben Gurion airport with Israeli Prime Minister Benjamin Netanyahu and his wife Sara. As seen in the video, Trump walking a little ahead of Melania, extended his hand behind for her to hold, but the First Lady quickly brushed it off, but not before cameras captured this brief moment.

Israeli Prime Minister Netanyahu and Sara held hands and walked together with Trump and Melania.

@haaretzcom @ZerlinaMaxwell Go Melania. She wasn't having it. Well at least we Know now that someone in the Family Hates Trump as much as the Rest of America.

@haaretzcom She can't even fake it for the cameras. I'm almost beginning to like her.

This was not the first time an awkward moment between Melania Trump and Donald Trump was captured. In April this year, Melania was seen giving Trump a nudge, reminding him to raise his hand to his heart during the national anthem.