Trump visited the Western Wall in a private capacity and was not accompanied by any Israeli leaders. 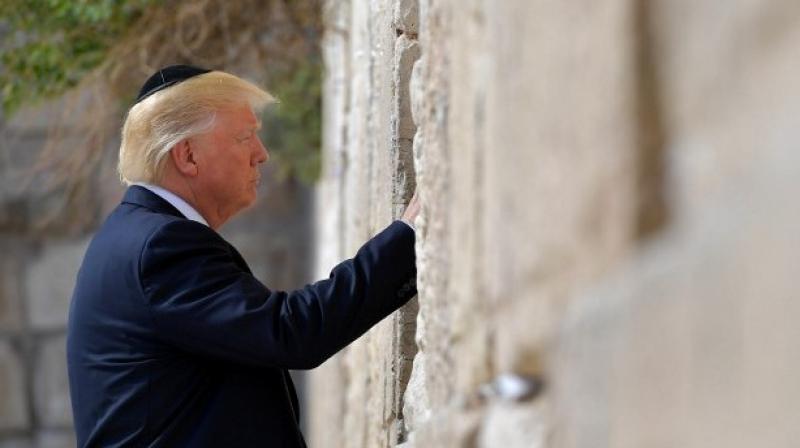 Trump paused in front of the wall and then slipped a note with a prayer between its stones, as is custom. (Photo: AFP)

Jerusalem: With a black skullcap on his head, Donald Trump on Monday prayed at the Western Wall in the Old City of East Jerusalem, becoming the first sitting US president to visit one of the most sacred sites in Judaism.

Trump visited the Western Wall in a private capacity and was not accompanied by any Israeli leaders. He arrived at the site accompanied by his wife Melania, daughter Ivanka and Jewish son-in-law Jared Kushner.

Respecting the Jewish custom, he and Kushner visited the men's prayer area, and Melania and Ivanka visited the women's section. The two sections are separated by a barrier.

The US president was briefed about the significance of the site by Mordechai Eliav, the director-general of the Western Wall Heritage Foundation. Trump paused in front of the wall and then slipped a note with a prayer between its stones, as is custom. He then stood by the wall for several minutes silently with his right hand resting on its blocks. He smiled briefly and removed his hand.

The Western Wall is the holiest site where Jews can pray. It is situated below the Al-Aqsa mosque compound, considered to be Islam's third-holiest site after Mecca and Medina. Security was tightened in and around the area with all the major roads in Jerusalem completely gridlocked.

Earlier, Trump visited the Church of the Holy Sepulchre where according to Christian tradition Jesus was buried and resurrected.