Israel annexed the area in a move never recognised by the international community. 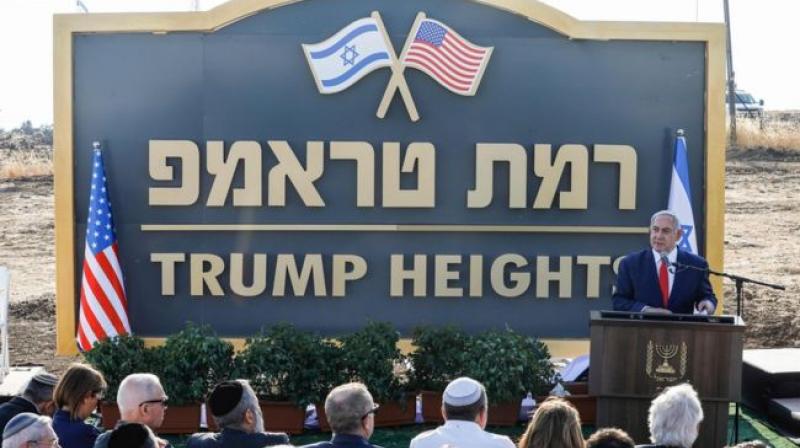 Netanyahu unveiled a 'Trump Heights' sign, featuring an Israeli and a US flag, to mark the site of the new settlement. (Photo: AFP)

Netanyahu unveiled a “Trump Heights” sign, featuring an Israeli and a US flag, to mark the site of the new settlement.

“Thank you PM @netanyahu and the State of Israel for this great honor!” Trump tweeted.

The ceremony comes after the US president in late March recognised Israeli sovereignty over the part of the strategic plateau it seized from Syria in the 1967 Six-Day War.

Israel annexed the area in a move never recognised by the international community.

“The Golan is Israeli and will remain so always”, Netanyahu declared.

Trump is “a very great friend of Israel who has taken a decision that has never before been taken”, he added.

Surrounding a large table, Israel’s cabinet met under a tent in the north of the Golan to name the planned settlement, in the presence of US ambassador to Israel David Friedman.

Outside the tent, a sign bearing the name of the settlement was unveiled shortly after an announcement to local officials.

The naming “is an extraordinary gesture”, Friedman said.

Construction of the settlement is planned in an area currently occupied by four settler families.

It is to be built on the site of a former kibbutz, first established in 1984.

The inauguration of the new settlement will “drive development of the Golan Heights”, Netanyahu added, promising the government would invest in building homes and roads, as well as education and tourism facilities.

Vladimir Pelopzerkovski, a resident of one of the mobile homes, said he spoke to the Israeli premier and told him he hoped such promises would be kept.

But “I am not convinced that these promises will bring true change”, the 75-year-old told AFP.

Some 23,000 Druze -- an Arab Muslim minority also present in Syria and Lebanon -- live in the occupied and annexed portion of the Golan, while 25,000 Israeli settlers have arrived there since 1967.

Netanyahu also said Trump had proven “once again his commitment to the security and the future of Israel”, recalling that the US president transferred the US embassy from Tel Aviv to Jerusalem in May 2018.

Trump’s embassy decision broke with decades of international consensus not to recognise the city as the capital of Israel, which took over mainly Palestinian east Jerusalem in the Six-Day War and later annexed it.

Israel considers the entire city its capital, but the Palestinians see east Jerusalem as the capital of their future state.