Palestinians clash with cops at US embassy in Lebanon

Scores of demonstrators, including Palestinians, pelted security outside the embassy with stones and burned an effigy of US President Donald Trump. 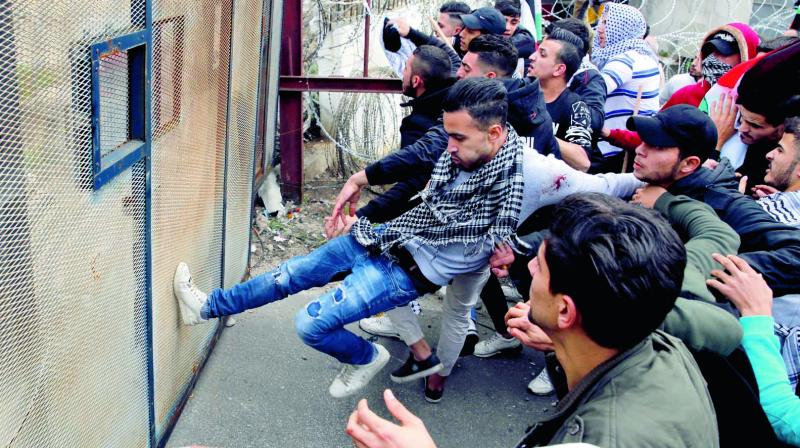 Protesters try to enter the US embassy during a demonstration in Aukar, Lebanon. (Photo: AP)

Beirut: Lebanese security forces fired tear gas and water cannons on Sunday at demonstrators near the US embassy as they protested Washington’s decision to recognise Jerusalem as the capital of Israel.

A correspondent in Awkar outside the capital Beirut said several hundred pro-Palestinian demonstrators had gathered near the US embassy, located in the area.

They were blocked from reaching the complex by a metal gate sealing the road leading to the embassy, and security forces fired teargas and water cannons to repel demonstrators who tried to open the gate by force.

Several people were injured by rocks and tear gas, the correspondent said. There was no immediate comment from security forces.

Protestors waving Palestinian and Lebanese flags, and sporting black-and-white checked keffiyeh scarves, chanted slogans against President Donald Trump, who on Wednesday recognised Jerusalem as Israel’s capital. A group of demonstrators set alight an effigy of the US President, whose decision has upended decades of American diplomacy and an international consensus to leave the status of Jerusalem to be resolved in negotiations.

The demonstrators included members of Palestinian parties, as well as Lebanese Islamists and leftists. Thousands of Palestinian refugees live in Lebanon, including those who fled from their homes.