Iran police chief Gen Hossein Ashtari said several people with connections to the attackers were arrested around the capital area. 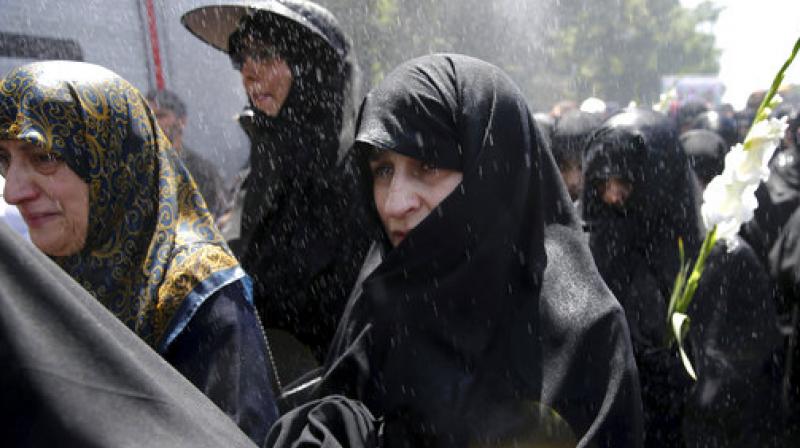 Iranians attend the funeral of victims of an Islamic State militant attack on Wednesday, in Tehran, Iran. (Photo: AP)

Tehran: Iranian authorities have arrested eight suspects for allegedly supporting the Islamic State-claimed attacks on Iran's parliament and the shrine of Ayatollah Ruhollah Khomeini that killed 17 people in Tehran.

The IRNA report quoted Ahmad Fazelian, chief justice of Alborz province west of Tehran as saying: "These agents who were supporters of the two terrorist groups, and had full coordination with them, were arrested and they were delivered to Tehran's judicial and security authorities."

Meanwhile, Iran police chief Gen Hossein Ashtari said several people with connections to the attackers were arrested around the capital area. Two guards, 10 government staffers and five civilians were killed in the attacks that simultaneously targeted the country's parliament and the shrine of the late founder of the Islamic Republic Ayatollah Ruhollah Khomeini.

The Interior Ministry in a statement increased the number of wounded to 52. On Thursday, Iranian authorities said the assailants were Iranian nationals and that they had arrested six suspects, including one woman, since the attack Wednesday in Tehran.

On Friday, the Intelligence Ministry announced that it had detained 41 suspects in Tehran and the western Kurdish provinces.

It called the detainees "elements of the Wahhabi IS group," and said they were involved in operations, communication and logistics for the local Islamic State group cell.

Last August, the government announced it had executed a number of Kurdish Islamic extremists from a group known as Towhid and Jihad after convicting them of armed robbery, killing civilians and planning bomb attacks.