The assault is the latest on a religious minority increasingly targeted by Islamist militants. 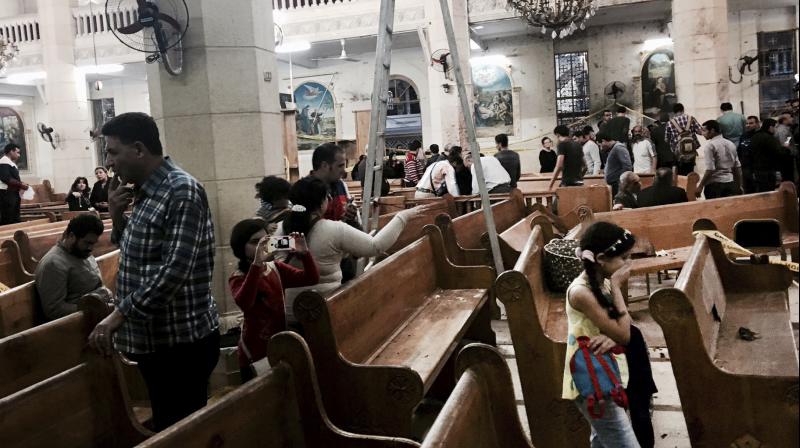 People look at damage inside the St. George's after a suicide bombing, in the Nile Delta town of Tanta, Egypt. (Photo: AP)

Tanta/Cairo: At least 44 people were killed in bomb attacks on the symbolic cathedral seat of the Coptic Pope and another church on Palm Sunday, prompting anger and fear among Christians and troop deployments across Egypt.

Islamic State claimed responsibility for the attacks, which also injured more than 100 people and occurred a week before Coptic Easter, with Pope Francis scheduled to visit Egypt later this month.

The assault is the latest on a religious minority increasingly targeted by Islamist militants, and a challenge to President Abdel Fattah al-Sisi, who has pledged to protect them as part of his campaign against extremism.

The first bombing, in Tanta, a Nile Delta city about 100 km (60 miles) north of Cairo, tore through the inside of St. George Church during its Palm Sunday service, killing at least 27 people and injuring at least 78, the health ministry said.

The second, carried out a few hours later by a suicide bomber in Alexandria, hit Saint Mark’s Cathedral, the historic seat of the Coptic Pope, killing 17 people, including three police officers, and injuring 48, the ministry added.

Coptic Pope Tawadros had been leading the mass at Saint Mark’s Cathedral at the time of the explosion but was not injured, the interior ministry said.

“These acts will not harm the unity and cohesion of the people,” he was later quoted as saying.

Mr Sisi ordered troops be immediately deployed to assist police in securing vital facilities, a rare move for the general-turned-president, who as defense chief led the military’s 2013 ouster of the Muslim Brotherhood’s Mohamed Morsi.

“The attack...will only harden the determination (of the Egyptian people) to move forward on their trajectory to realize security, stability and comprehensive development,” Mr Sisi said in a statement.

US President Donald Trump condemned the attack.  “So sad to hear of the terrorist attack in Egypt. US strongly condemns. I have great confidence that President Al Sisi will handle situation properly,” Mr Trump wrote on Twitter.