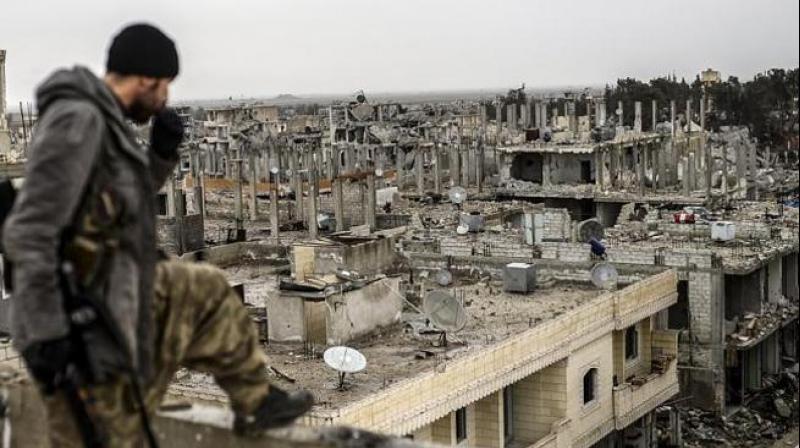 State news agency SANA said that there were 'dead and wounded' in the strike, without giving exact casualty numbers. (Photo: Representational | AFP)

Damascus: Syria and its Russian ally accused Israel on Monday of carrying out a deadly dawn bombing raid on a military airbase, as global outrage mounted over an alleged poison gas attack outside Damascus.

US President Donald Trump and French counterpart Emmanuel Macron had vowed a strong response to the suspected chemical attack on the rebel-held town of Douma and the UN Security Council was expected to discuss the crisis later on Monday.

Syrian state media reported "several missiles" had hit the T-4 base in central Syria just before dawn on Monday. Washington and Paris denied any involvement, and Damascus later blamed Israel.

"The Israeli attack on the T-4 airport was carried out with F-15 aircraft that fired several missiles from above Lebanese territory," state news agency SANA reported, quoting a military source.

The Russian army also accused Israel, saying two Israeli F-15s had fired eight missiles at the base and that five were destroyed by air defence systems but three hit a western part of the facility.

The Syrian Observatory for Human Rights, which monitors the country’s conflict, said 14 fighters had been killed, including Syrian army officers and Iranian forces. Forces from regime backers Russia and Iran, as well as fighters from the Lebanese Hezbollah militia, are known to have a presence at the base, said Observatory chief Rami Abdel Rahman.

In Washington, a Pentagon spokesman denied it was involved, saying: "At this time, the Department of Defence is not conducting air strikes in Syria."

US forces a year ago fired a volley of cruise missiles at the governments Shayrat air base in retaliation for another suspected chemical attack in April 2017. The Shayrat airport lies just 70 kilometres (45 miles) west of T-4, also known as the Tiyas base. French army spokesman Colonel Patrik Steiger also denied France carried out the strike, telling AFP: "It was not us."

A military spokeswoman for Israel, which has hit Syrian military positions several times in recent years, declined to comment. Israel has repeatedly warned it will not accept its arch-foe Iran entrenching itself militarily in Syria.

In February, it accused Iranian forces at the T-4 base of sending a drone into Israeli territory. After targeting Iranian units in Syria in retaliation, an Israel F-16 was shot down by Syrian anti-aircraft fire in one of the conflicts most notable escalations. Israel then carried out what it called "large-scale" raids on Syrian air defence systems and Iranian targets, which reportedly included T-4.

Nick Heras, an analyst at the Centre for a New American Security, said it Israel had a vested interest in bombing T-4.

"The Israelis, well aware of the importance of the T-4 base for Iran to apply strategic military pressure on Israel, would have ample reason to strike the base hard," he told AFP.

Lebanon's National News Agency on Monday said Israeli warplanes were flying near the country’s border with Syria. AFP’s correspondent in eastern Lebanon said a plane could be heard flying towards Syrian border around 3:30 am local time (0030 GMT). Trump had reacted with fury to Saturday’s apparent chemical attack in Douma -- the last rebel-held area of the onetime opposition enclave of Eastern Ghouta -- lashing out at President Bashar al-Assad and his Russian counterpart Vladimir Putin.

Syria and Moscow denounced the allegations as "fabrications" and warned against using them to justify military action. Backed by Moscow, Assad has waged a seven-week assault to dislodged rebels from Eastern Ghouta. The onslaught killed more than 1,700 civilians, displaced tens of thousands, and left Islamist rebels cornered in their last holdout of Douma, Ghouta's largest town.

Late Saturday, the White Helmets, which act as first responders in opposition-held areas of Syria, said "poisonous chlorine gas" had affected hundreds in Douma. In a joint statement with the Syrian American Medical Society, the rescue force said at least 48 people had died, bearing symptoms consistent with exposure to toxic substances.

Footage posted by the White Helmets, which was not possible to verify, showed victims with yellowed skin crumpled on the ground and foaming at the mouth. Relief workers inside Douma told AFP corpses still lay in the streets on Sunday and hospitals were teeming with dead and wounded. After capturing most of Ghouta with a military assault, Syria and its ally Russia secured two negotiated withdrawals last month that saw 46,000 rebels and civilians evacuate.

After a preliminary deal for the third and final pocket of Douma, hundreds of civilians and fighters from the Jaish al-Islam faction left the town. After days of talks and a respite from bombing, negotiations collapsed and strikes resumed Friday, killing nearly 100 people, according to the Observatory.

On Sunday, state media announced a deal was agreed for Jaish al-Islam to leave Douma within 48 hours and release hostages it was holding. Several buses of detainees arrived in Damascus overnight after having been freed by Jaish al-Islam, said state news agency SANA.

It said on early Monday that other buses carrying rebels and civilians had begun leaving Douma, in a parallel operation. Moscow said some 8,000 fighters and 40,000 civilians would be bussed out and said that proved "no chemical weapons were used in this area".

A civilian committee from Douma participating in the talks confirmed the agreement but Jaish al-Islam has yet to comment.