Israel and the United States consider Hamas, which has fought three wars with Israel since 2007, a terrorist organisation. 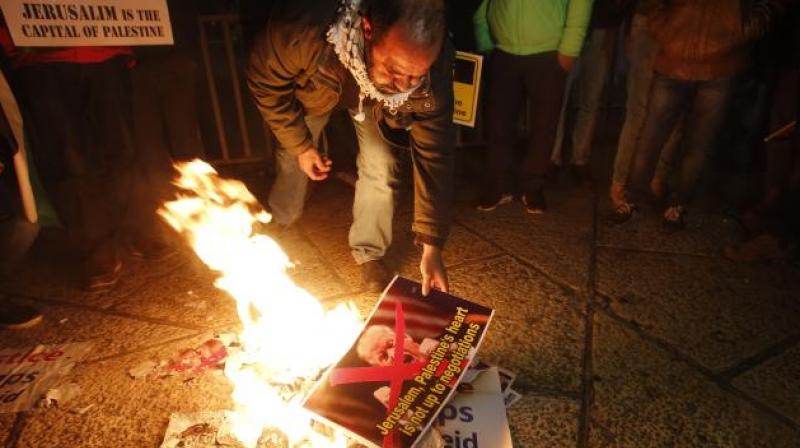 Haniyeh called on Western-backed Palestinian President Mahmoud Abbas to withdraw from peacemaking with Israel and on Arabs to boycott the Trump administration. (Photo: AFP)

Gaza: The powerful Palestinian Islamist group Hamas called on Thursday for a new uprising against Israel after US President Donald Trump's recognition of Jerusalem as the Israeli capital.

"We should call for and we should work on launching an intifada in the face of the Zionist enemy," Hamas leader Ismail Haniyeh said in a speech in Gaza.

Haniyeh, elected the group's overall leader in May, urged Palestinians, Muslims and Arabs to hold rallies against the US decision on Friday, calling it a "day of rage".

"Let December 8 be the first day of the intifada against the occupier," he said.

Israel and the United States consider Hamas, which has fought three wars with Israel since 2007, a terrorist organisation. It does not recognise Israel's right to exist and its suicide bombings helped spearhead the last intifada, from 2000 to 2005.

"We have given instruction to all Hamas members and to all its wings to be fully ready for any new instructions or orders that may be given to confront this strategic danger that threatens Jerusalem and threatens Palestine," said Haniyeh.

"United Jerusalem is Arab and Muslim, and it is the capital of the state of Palestine, all of Palestine," he said, referring to territory including Israel as well as the Hamas-controlled Gaza Strip and the Israeli-occupied West Bank.

Haniyeh called on Western-backed Palestinian President Mahmoud Abbas to withdraw from peacemaking with Israel and on Arabs to boycott the Trump administration.

"It should be announced that the so-called peace agreement was buried, once and for all, and that there is nothing called a partner for the Palestinians in peace," he said.

Trump reversed decades of US policy to recognise Jerusalem as the capital of Israel, upsetting the Arab world and Western allies alike.